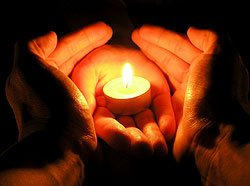 Never Forget. Never Again. Words of enormous import that must be addressed with utmost seriousness. And so I begin here with a short Aish video that features the Holocaust Memorial in Miami Beach, which is stunning in its depiction of Jewish pain.

Holocaust survivor Samuel Piser has a piece in today’s JPost, “The Holocaust is about today and tomorrow.” In it he writes:

“We, the last survivors, have a solemn obligation to testify, in the name of the dead and the living, that what we have endured was a gruesome reality indeed, but also a permanent warning to mankind as a whole of horrors that might still lie ahead.” (Emphasis added)

It is in this context that the issue of preventing Iran — whose leaders have declared intent to wipe Israel off the face of the earth — from developing nuclear weapons is so very relevant. It is not an issue to be taken lightly, which is why I write about it so often — and with such frustration, because, their declarations aside, most of the world’s leaders are taking it lightly.

With regard to Iran. Israeli Defense Minister Ehud Barak has made a statement indicating that Israel has not promised the US to refrain from attacking Iran while negotiations are going on: “We are not committing to anything.”

“[The negotiations must be] purposeful and results oriented. They need to clarify if Iran is genuinely willing to stop its military nuclear program or not.

“For this we don’t need months upon months. It requires a few direct meetings where all the demands are put on the table. There you can see if the other side is playing for time, drawing it out through the year, or if indeed the other side is genuinely striving to find a solution.”

This is good news, for it is certainly the case that the US is attempting to squeeze Israel into holding off while “diplomatic” efforts continue. And I like it that Barak speaks about putting “demands on the table,” rather than analyzing what sort of accommodating “deal” can be offered. (And yes, there is, incredibly, talk within the US with regard to cutting back on sanctions if the Iranians show serious intent.)

I recognize, as a reader pointed out yesterday, that I may sound a bit “schizoid” when I praise Barak and Netanyahu in the context of their positions on Iran, because I am at the same time quite disappointed with — indeed sometimes furious at — them in the context of Jewish communities in Judea and Samaria.

What I am doing, quite simply, is calling it as I see it. I believe that our leaders have a more solid grasp of the realities with regard to Iranian nuclear development than officials in just about any other nation — or a greater readiness to confront those realities. Netanyahu has been warning the world about Iran for a long time. This is something to be grateful for. In the end his relatively clear-eyed vision, and Barak’s, may make a world of difference for us.

Tonight at ceremonies at Warsaw Ghetto Square at the Yad VaShem Holocaust Memorial in Jerusalem, Netanyahu said (All emphasis added):

“I believe in our ability to defend.

“A nuclear Iran is an existential threat on the State of Israel and also on the rest of the world. We have an obligation to prevent Iran from obtaining nuclear weapons. It’s the world’s obligation, but above all it is our obligation. My friends, to have a prime minister who speaks thus is no small matter.

Heads of most states and the EU function as this Dry Bones cartoon describes:

(With thanks to Ruth N.)

But no, in no way does this negate my distress with decisions made by Netanyahu and Barak in other areas. Nor have I forgotten about them.

At the present time, with regard to issues involving Jewish rights in Judea and Samaria, there is a great deal going on. It is a time of flux, political game playing, and tensions.

At one and the same time, we are looking at:

[] the issue in Migron, which has not been resolved with finality

[] the possibility of the destruction of the Ulpana neighborhood of Beit El by the end of the month, in spite of what I understand was a commitment by Netanyahu to work to see that this didn’t happen

[] the resolution of the Beit HaMachpela controversy in Hevron, with residents being permitted to return

[] and the possible legalization of three communities that have been considered “unauthorized”: Bruchim, Sansana and Rechelim.

Coupled with this is an effort to successfully bring through the Knesset legislation that would resolve the Migron issue and others as well. It would permit dismantling of communities only if there was legal documentation presented by the Arabs claiming the land, and, even so, only within a specified time period. For communities with 20 or more families, who have been living in their homes beyond that specified period (four years, I believe), the Arabs who belatedly presented documentation would receive compensation instead.

Part of the current problem is that the government — or more technically perhaps the Civil Administration in Judea and Samaria — has made blanket assumptions about Palestinian Arab ownership of land, even in the absence of clear documentation. It is another instance of our not standing up for ourselves, and it has a history to which I will return in time.

As the situation unfolds, I will do my best to track it.

Lt.-Col. Shalom Eisner has been relieved of his IDF position by Chief of Staff Benny Gantz. He will not be able to serve in a command position for two years, but was not released from the army.

Gantz said that Eisner’s action was a moral failure. Eisner asked what was more important, fulfilling his mission or looking good for the world.

With this, I think there is a great deal of confusion on the issues. “Moral failure” seems a harsh description of what transpired. Eisner showed poor judgment — what he did was not OK. But was this truly a “moral” issue, or, rather, a momentary lapse by a man who had broken fingers and had been harried for two hours. In my last posting I asked the question: “When and under what circumstances, if ever, does a soldier have a right to hit back when attacked?” Is Gantz’s answer “never”?

What bothers me is that Gantz said the IDF investigation showed “operational and command failures” including with regard to the army’s preparation for the activists’ protest.” Does the IDF, then, not bear some responsibility for what transpired?

Eisner is absolutely correct, I believe, in suggesting that the severity of the IDF response to what he did was greater because he had been videotaped and his actions were seen across the world. This is the Israeli concern with how we appear. And there is no question that our enemies have a field day with such an issue.

However…when Eisner suggests that he had to behave that way to fulfill his mission, I have trouble with that. This is considerably different from saying, with regret, that he lapsed under pressure.

“My feeling is that the protesters themselves said afterward that the only reason they stopped the protest and didn’t push further was because the deputy commander acted like that.

Surely, there were ways to control the crowd other than hitting an “activist” with a rifle. If he hadn’t hit the guy, it would have meant that the IDF soldiers would have had to back down? There’s a disconnect here.

And I think in part the disconnect has to do with the issue of what Israeli and IDF policy exists with regard to people like the Danish troublemaker who was hit by Eisner. Ariel’s mayor, Ron Nachman, who wrote a strongly worded letter to Gantz, looks at this issue:

“The decision did not address that Palestinians and foreign citizens came to provoke us in Israeli territory and Judea and Samaria. It is one sided and shows you do not have the courage to deal with the anarchists.
“Following the many demonstrations I have witnessed over the years staged by these left-wing organizations, who you know well, I turned to the Attorney General to stop the provocations and acts of incitement.

“…you are…sending the worst message possible to the soldiers in the Army.”