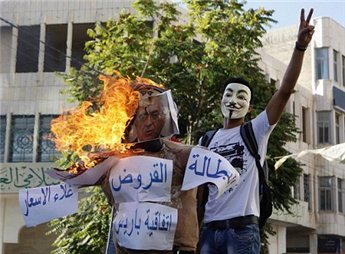 RAMALLAH (Ma’an) — Palestinian Authority Prime Minister Salam Fayyad on Thursday announced he would resign if that was the will of the people, amid growing protests across the West Bank over the rising cost of living.

Palestinians have taken to the streets for three days in mass demonstrations against price rises and unemployment, and protesters in cities across the West Bank have called for Fayyad’s resignation. In Hebron on Tuesday, protesters burned an effigy of the premier. A Palestinian protester wearing a Guy Fawkes mask gestures as he
stands near a burning effigy of Salam Fayyad during a demonstration
against the high cost of living, in the West Bank city of Hebron on
Sept. 4, 2012. (Reuters/Mussa Qawasma)

Fayyad told Voice of Palestine radio that replacing figures in the government was not the solution to the financial crisis, but that a new economic strategy was needed.

The premier said he could not set a date for paying government workers their August salaries because the Palestinian Authority was waiting on donor funds to arrive.

Fayyad also said the Palestinian Authority needed to be restructured on a democratic basis to address political and economic crises.

The PA is waiting for the US Congress to approve a request by President Barack Obama’s administration to pay $200 million to the Ramallah-based government. A hoped-for $1.1 billion in 2011 reached only $750 million, as pledges from Gulf states in particular fell short.

The revenue received from Gaza has dropped from 28 percent to 4 percent of the Palestinian Authority’s budget since Hamas took over the coastal enclave. Meanwhile, 48 percent of the PA’s budget is spent on the Gaza Strip, Fayyad said.

Between the national division and Israel’s occupation, the PA cannot cope with the rising prices of imports.

The government is subsidizing fuel to assuage price increases, but a 5 percent hike in the price of fuel has angered transport workers. Bus, taxi and lorry drivers have protested and held strikes across the West Bank in response to the price increase.

Fayyad said the PA could not scale back the increase without diminishing the government’s ability to pay salaries.

The premier called on the private sector and importers to reduce their profits to lesson the economic burden on citizens. He added that the PA had been in talks with Libya and Gulf states to create job opportunities for young people.

Earlier Thursday at a meeting in Ramallah with his Italian counterpart Giulio Terzi, Fayyad said the PA’s economic growth was hindered by Israeli restrictions.

Israel frequently demolishes development projects in Area C, and has not implemented provisions in the Paris Protocol of 1994 to allow Palestinians access to Israeli markets. Israel’s control of the West Bank’s borders hinders the export market, and restrictions on imports limit domestic industries.

Israel has serially withheld the payments import duties as punishment for past Palestinian political maneuvers, such as negotiations with Hamas or UN statehood initiatives.

While Fayyad has been lauded abroad for his efforts to combat corruption in the PA, he has faced the brunt of people’s anger at the rising costs of basic commodities and growing unemployment.

Fayyad helped preside over economic policy as finance minister until being replaced earlier this year.

In the third day of mass protests across the West Bank, Palestinians marched through Jenin demanding Fayyad’s resignation and calling on the PA to set a minimum wage, create jobs for the unemployed and lower university fees.

Union leaders addressed the crowds and said they would not remain silent amid rising prices, growing unemployment and lack of welfare which they said had led to an economic “tsunami.”

Taxis and buses blocked roads in the northern West Bank city. Taxi drivers, angry at a five percent hike in fuel prices, organized a mass strike across the West Bank on Thursday causing traffic jams through the morning rush hour.

In Tulkarem, protesters marched with donkeys to show that fuel had made conventional transport unaffordable as the taxi strike shut down traffic in the city. They chanted “Salam, leave, the people want Fayyad to step down.”

Reuters contributed to this report.