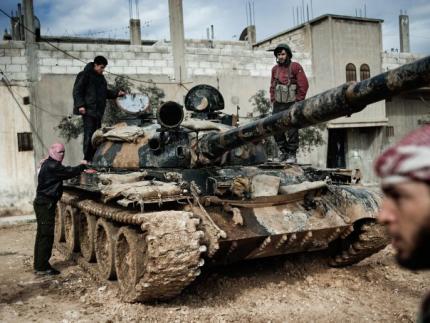 For months now, the United States has been providing direct so-called humanitarian assistance to the Syrian rebels-while cautioning Saudi Arabia, Qatar, and other Arab states to limit the types of weaponry they provide. Rifles and other small arms are okay, the administration says, but not heavier weapons that might fall into the hands of al-Qaeda and other terrorists fighting alongside the rebels.

The last thing Washington wants to do, administration officials have repeatedly said, is “radicalize the conflict.” But the truth is, that’s exactly what happening, and America’s strategy carries some of the blame.

With AK-47s, hand grenades, and other light weapons, the Syrians are able to do little more than maintain a stalemate with the far better armed Syrian military. That’s why the rebellion is now in its 19th month. And along the way more and more extremists are pouring into the country.

Last week, in fact, British authorities arrested two suspected terrorists as they were about to board a plane at London’s Heathrow airport, on their way to Syria. And last Tuesday, a group linked to al-Qaeda claimed responsibility for the suicide attackers who bombed a government intelligence-service compound just outside Damascus.

All of that raises the ever more frightening specter that, should the Bashar al-Assad regime finally fall, a new war will break out between the legitimate rebels, former army officers and other citizens, and the al-Qaeda operatives and related Islamic extremists now heavily represented there.

That endgame may finally be in sight. As the cross-border shelling between Turkey and Syria goes on, Turkey’s armed forces chief of staff warned on Wednesday that if it continues “we’ll respond more strongly.”

Meantime, the Pentagon has dispatched at least 150 American troops to Jordan, Syria’s southern neighbor, in theory to help manage more than 100,000 Syrian refugees now housed there. But Defense Secretary Leon Panetta also said another part of the troops’ mission is to be sure the conflict does not spread even further-and, if necessary, to safeguard Syria’s large stores of chemical and biological weapons.

President Obama has warned that the United States would respond with force if Syria moved or threatened to use its chemical weapons. Then late last month Panetta acknowledged that “there has been some intelligence with regard to some of these sites that there has been some movement” probably to “better secure… the chemicals.”

Late in the week, Turkey seized a Russian plane carrying weaponry for Syria. That infuriated Moscow. With friction mounting, and as Turkey and the United States bluster and prepare for possible conflict, it feels like the long, deadly stalemate may soon end.