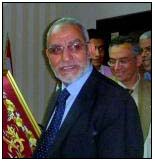 The Simon Wiesenthal Center is calling on President Obama to publicly condemn the anti-Semitic call for Jihad against Israel by the Muslim Brotherhood’s Supreme Guide, Mohammed Badie and to order the cutoff of all contacts with the

organization until the threat is withdrawn.

In a speech reported Thursday in al Ahram, Badie said, “The Jews have…spread corruption on earth, spilled the blood of believers and in their actions profane holy places, including their own.” Badie called on Arabs to confront Israel “through Holy Jihad, high sacrifices and all forms of resistance”, adding, “Zionists only understand the language of force and will not relent without duress.”

“We are not dealing with a Youtube video or a lone extremist Imam, but a call to anti-Semitic violence by a man who has tens of millions of followers and leads the organization that controls Egypt’s future. It cannot be business as usual in Washington when such an assault is launched against the Jewish people,” they added.

We urge President Obama to condemn the rhetoric and cut off all official and unofficial US contacts with the Muslim Brotherhood until they desist from their hate and war mongering,” Hier and Cooper concluded.

The Simon Wiesenthal Center is one of the largest international Jewish human rights organizations with over 400.000 members. It is an NGO at international agencies including the United Nations, UNESCO, the OSCE, the Council of Europe, the OAS and the Latin American Parliament.