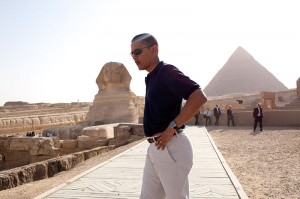 One argument we will be increasingly hearing is that President Barack Obama couldn’t have done anything to change events in the Middle East. This is ironic of course because when things were going well he wanted to take credit as the inspiration for the “Arab Spring.”

Let’s remember that the president began with three acts that foreshadowed what was to come. He gave a speech in Cairo in which Muslim Brotherhood leaders were seated at the front, thus making it impossible for Egyptian government officials to attend. Obama thus not only declared himself on the side of the opposition but of the Islamist opposition.

What’s even important but never noticed was something critical Obama did. In discussing the Middle East and the Arabic-speaking world he exalted Islamic identity. Remember that for six decades national, i.e., Arab, identity that had dominated. True, it was used by dictatorships and for demagogic, anti-American purposes.

Now, however, here was an American president declaring that religious identity should dominate. This was an action against both the existing regimes but also against the moderate opposition forces.

After the demonstrations in Egypt began In January 2011 the U.S. State Department, with the approval of Secretary of State Hillary Clinton, advocated a policy in line with traditional U.S. strategy. They would work with the military to institute reforms and more freedom while jettisoning the aged, ineffective President Husni Mubarak. But they opposed the dismantling of the regime.

The White House rejected that approach and publicly declared its desire for Egypt’s fundamental transformation. Anyone who knew Egypt should have and could have predicted this meant Islamist dominance. Yet the administration rejected the idea that this might happen. Indeed, without being asked, Obama publicly stated that he had no problem with a Muslim Brotherhood government taking power. Obama deliberately didn’t consult with the leaders of Israel, Jordan, or Saudi Arabia because he didn’t want to hear their warnings about the risks he was taking and their opposition to what he was doing. He had already decided that a Brotherhood regime would be his preferred outcome.

By such actions, Obama conveyed to the military that it could not expect U.S. support and made it impossible for the generals to try to retain control over events. Indeed, in the following months, U.S. policy under Obama’s direction constantly criticized the military and called for a quick transition.

But that did not mean that the Obama Administration supported the moderate opposition. Reportedly, U.S. programs that helped prepare political forces for elections and taught them lessons about organizing were directed to the Brotherhood, not the liberals. There was certainly no systematic effort to help the moderates.

Indeed, in briefings to Congress and the media literally every day in 2011 and throughout 2012, the Obama Administration-under the president’s supervision-whitewashed the Brotherhood as a moderate organization. Anti-American speeches by Brotherhood leaders, calls for Jihad against Israel, extremist actions, and support for violence against U.S. soldiers in Iraq were all ignored. The best known example was intelligence director James Clapper’s declaration that the Brotherhood was a secular, moderate group.

What America says and does has more influence in the region than many Americans think. If local forces fear the United States or think it involved in conspiracies against them (rightly or wrongly) that influences their behavior. They act more cautiously. Moderates and anti-Islamist military officers may be encouraged or demoralized to become more active and tough. In Obama’s case, he persuaded the anti-Islamist forces that he was on the other side and that they had no chance of winning.

Therefore, while of course the main determinant factors took place in Egypt, U.S. influence was considerable but was deployed to help the Brotherhood. If Obama had backed the Egyptian army it probably would have retained control, even while granting a lot more freedom and a role for elected authorities. If Obama had backed the moderates, they probably would have done much better in the elections.

So while, of course, the U.S. government and Obama are only responsible in part for what happened in Egypt, they did have real influence and that was provided to anti-American, radical, and antisemitic forces.

There are those who want to focus on the idea that this was on purpose because of Obama’s own views and nature. Such ideas are not provable and in a real sense aren’t important. What is important is to show that Obama’s actions were objectively against U.S. interests, made peace in the region less likely, and contributed toward creating new dictatorships.

The reason for this was the view held by the White House, National Security Council, CIA, and to a limited extent in the State Department that al-Qaida was the enemy but that other Islamist groups did not pose a threat because they did not seek to attack the United States directly. Out of ignorance in some cases and their own radicalism in others, Obama appointees claimed they could moderate hardline anti-American Islamists or at least the prospect of being in power would mellow them.

The second thing Obama did was his romance with the Islamist regime in Turkey. He constantly portrayed that government as his best friends in the region, despite their anti-American, anti-Israel actions. This conveyed the message that the United States could be easily suckered. Looking at Turkey, Arab Islamists concluded that the “Turkish model”-pretended moderation combined with continued but patient radicalism-could bring them to power. And that’s what happened in Egypt and elsewhere.

The way the Turkish regime broke that country’s army which, despite its long friendship with the United States, received no help from Obama was also a model for radicals in the Arabic-speaking world. I have it on good authority that when the Turkish generals explored the idea of bringing down a government they saw as destroying the republic, they got no sympathy in Washington. Hence, they gave up and patiently awaited their decapitation.

The third way Obama affected the regional situation and “Arab Spring” was by his clear expressions of weakness, his proud outspokenness about surrendering leadership, his apologies and criticisms of America. This translated into a belief by the radicals that the United States was collapsing and that it would no longer support the existing regimes. Thus, the moment for revolution had come and the radicals need not fear being put down by local governments deprived of U.S. backing.

Finally, there is the shocking strategy by which Obama turned over management of the Syrian civil war to the aforementioned Turkish Islamist regime, which wanted a Muslim Brotherhood government in that neighboring country. The United States thus threw its prestige behind an exile leadership dominated by the Syrian Brotherhood. If the group had not stumbled and been rejected by the internal revolutionary forces, Obama would have been parent to a Muslim Brotherhood government in Syria.

And afterward, Obama and his government made no effort to channel weapons to the anti-Islamist forces in Syria-defected officers, Kurdish nationalists, liberals, and apolitical instant warlords. Qatar and Turkey were allowed, under U.S. supervision, to arm the Brotherhood; Saudi Arabia gave weapons to the Salafists. No doubt if and when a Muslim Brotherhood regime takes over in Syria we will be told that this was beyond Obama’s control.

There are many other examples. Obama stood silent as an Iranian opposition arose, took to the streets, and was crushed by the Islamist regime there. He did not lift a finger to help the moderate opposition in Lebanon. And when pro-Hamas activists launched a flotilla he pressured Israel to reduce sanctions on the radical Brotherhood regime in the Gaza Strip, thus ensuring it would stay in power.

In Libya, Obama basically determined the overthrow of the Muammar Qadhafi regime and the rebel victory in the civil war. He was father of a regime which is certainly not Islamist or anti-American but may either significantly appease or be overthrown by such forces. As the Libyan government’s patron, Americans will become the target of revolutionary Islamists who blame the United States for their rulers and understandably believe that attacking America is a necessary part of overthrowing them. That, of course, is why the U.S. ambassador was murdered.

While, of course, we should acknowledge that the United States had only so much influence over the Middle East during Obama’s term, that does not change the fact that it did have considerable influence. And it was largely used in the service of extremists, not moderates, of America’s enemies and not America’s friends.