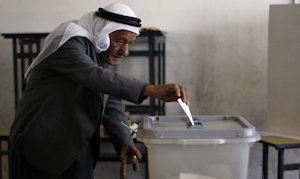 Over the past weekend, the Palestinian Authority held a round of local elections. It appeared to be an ordinary and routine local authority matter. However, it was anything but that.

This election round was meant to be held in 2009, to follow the elections that were held in 2005. In fact, the Palestinian Authority (PA) had already attempted to hold elections last year and even set a perspective date, just to cancel and postpone the process once more.

The PA’s past failure and current ability to hold elections stems from the political climate in the city of Nablus. As many are aware, a bitter rivalry exists between Fatah Tanzim (its militant faction), whose members are based in the refugee camps around Nablus, and the Nablus nobility which, while self-identifying as Fatah loyalists, have refused to accept Tanzim dominance and have contained their influence in the city.

This hidden tension between poor refugees organized as Fatah Tanzim and the wealthy noble families transformed into open hostility between then PLO leader Yasser Arafat and the city when the rich families of Nablus refused to finance the PLO. This, in turn, led to an internal terror campaign during the Second Intifada when the Tanzim terrorized the citizens of Nablus under the banner of the Al-Aqsa Martyrs Brigade.

In the past, Fatah’s Central Committee tried to depose former Fatah member Ghassan Shak’a’s candidacy and force a Tanzim candidate on Nablus. During the 2005 election, the families of Nablus decided to topple the Tanzim. After convening a secret meeting of the big families, it was decided to support the outgoing mayor, Imad Yaish, a Hamas loyalist, who won in landslide. The 2005 Nablus election served as a precursor for Hamas’ overwhelming victory in the Palestinian Legislative Council elections that followed.

Last year, after the Central Committee decided to run a Tanzim leader, Ahmad a-Dik, from a nearby village, while the Nablus families decided to run Gassan Shak’a again. This time, Hamas decided to support him against the Tanzim candidate. It also resolved to boycott the elections and only run informal Hamas figures for office. When Fatah learned that it was about to suffer a defeat in Nablus even without Hamas’ formal participation in the election, it decided to call the election off.

This year, however, elections became an option for Fatah once more when Hamas made a decision not to intervene in local West Bank elections. Hamas’ absence paved the way to the weekend’s electoral process and signaled its lack of interest in influencing developments in the West Bank, as opposed to a strong stake in Gaza as its stronghold.

Hamas’ move dovetailed neatly with its own elections to the Shura leadership. The organization ran the election in Gaza only and toppled all Hamas efforts to run similar elections in the West Bank. Hamas also sabotaged elections in the Diaspora, leading to the deposal of Khaled Mashal as Hamas leader.

By doing so, Hamas leadership in Gaza demonstrated that it trusted only the original founders of the movement in Gaza, not outsiders in the West Bank or the Diaspora.