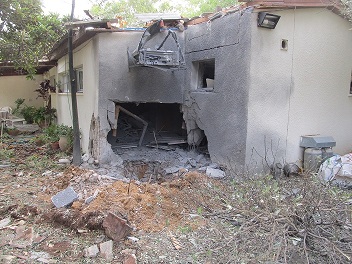 Photo:Direct hit by a missile in a house In Danny’s words, “After 29,000 aerial attacks in ten years, we do not see any light at the end of the tunnel”.

On the other hand, Danny Dahan said, pointing to Gaza, “The Gaza economy is booming, Israel does nothing to stop the munitions supplies to Gaza”. Dahan was referring to Israel continuing to allow hundreds of trucks of supplies and the famous monthly Brinks cash vehicle to Gaza. Dahan also referred to the fact that Israel does not kill Hamas leaders who give orders to shoot, following the precedent set when Israel killed Hamas leader Sheikh Yassin in 2004 years ago, with little condemnation.

Dahan, like many other people in Sderot and the collective farms in the area, also remarked that the people of Sderot feel isolated and abandoned by fellow Israelis who live in the center of the country.

Dr. Adriana Katz, the director of the Mental Health Center for Sderot and the Western Negev, observed this week that the population of Israel in the south is not coping very well with the continuing attacks. Dr. Katz reported that she has only three staff members to treat more than 3,000 active cases of people experiencing extreme mental health stress. Dr Katz’s appeals for more staff from the Israeli government and international relief agencies have fallen on deaf ears. Yet millions of dollars have been pumped into Sderot and the Jewish communities that are contiguous to Gaza for health, education and social services. Why is their mental health center not seeing that aid? No one in any governmental office will respond to that question.

You will not hear a word of criticism of the Israeli government or the Israel Ministry of Defense from the mayors of Jewish communities that border Gaza.

Three mayors with whom we spoke said, each of them in their own nervous manner, that “it is not their job to criticize how the Israeli defense establishment reacts to the Gaza attacks”.

The mayors would not comment on the decision of the Israel Defense Department Civil Administration to continue to dispatch a monthly Brinks cash vehicle which contains $13 million in cash dollars for UNRWA in Gaza, even though the UNRWA administration in Gaza remains totally under the control of the Hamas affiliated Islamic Bloc Trade Union. Israeli municipalities exist by the grace of the Israeli government

Israeli municipalities will not bite the hand that feed them.

Yet the Israeli government feeds the hand that bites them.

Israeli security sources report that Hamas simply takes the monthly cash allocation to UNRWA and uses it to purchase munitions from the Gaza tunnels.

No one in Israel’s defense establishment will explain why Israel does not bomb ALL of munitions tunnels from Gaza.

A question most often asked is what people can to help the Jewish communities who live under massive lethal attacks at this time.

The bottom line is for people who do not live in Israel’s pummeled southern region, whether in Israel or abroad, to publicly raise their voice and to show solidarity with the people of Sderot and the Western Negev

Support could be characterized by vigils outside of Israeli consulates and outside of media centers, to demand the following steps be taken by the government of Israel

2. Closure of ALL munitions tunnels into Gaza

3. Cessation of all cash deliveries to Gaza.

4. Execution of the Hamas leadership, applying the precedent of Sheikh Yassin, Now that Israel is about to embark on an election campaign, and with the US in the final stages of its election campaign, it would be most appropriate to ask these “four questions” of every politician, in the weeks and months to come

The time has come to transform the “Gaza policy” into an election issue.

In the words of my mentor in community organizing, Prof. Eliezer Jaffe “a problem is a problem when someone makes it into a problem”