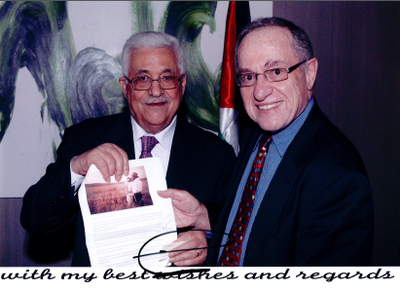 [Consistently, Abbas and Fayad use their Arab language media outlets and their schools to promote the “armed struggle to liberate Palestine”, the “right of return”., the release of those duly convicted of murdering Jews, and the praise of anyone who murders Jews…let alone the Abbas PHD which advances the notion that Zionists conspired with Nazis in WWII to murder millions of Jews – a PHD which is today used in all PA schools.

The following article by Dershowitz remains consistent with statements in Dershowitz’s book, the “Case For Peace”, http://israelbehindthenews.com/bin/content.cgi?ID=2384&q=1 where Dershowitz seems to take statements issued by Fayad and Abbas for western consumption at face value- David Bedein ]

I was invited to meet with President Abbas of the Palestinian Authority just before he spoke to the General Assembly of the United Nations. I came to the meeting with an agenda: to persuade him to sit down with the Israelis and resume negotiations without first requiring the Israelis to accept a total settlement freeze. I knew the Israelis would not-indeed could not-agree to a settlement freeze as a prior condition to beginning negotiations, since they had previously agreed to a nine month freeze and the Palestinians refused to come to the bargaining table until just before the freeze expired, and then demanded that the freeze be extended. Prime Minister Netanyahu had invited the Palestinians to begin negotiations with no prior conditions-an invitation that the Palestinians had rejected because the Israelis refused first to impose a freeze. My plan further required the parties to immediately agree to divide the disputed territories into three areas (that were roughly equivalent to areas already agreed to in other contexts). The first would be those parts of the West Bank that will never become part of Israel, such as Ramallah, Jericho, Jenin and other heavily populated Palestinian places. Israel would agree to freeze all building in that area. The second would be those parts of the West Bank that will definitely remain part of Israel after any peace agreement, such as Ma’ale Adumim, Gilo and other areas contiguous to greater Jerusalem. The Palestinians would agree not to oppose building within that area. The third would be those parts of the West Bank that are subject to reasonable disagreement as to whether they will become part of a Palestinian state or remain part of Israel subject to land swaps. These include Ariel, the Etzion Bloc and other settlements fairly close to the Green Line. The Israelis would agree to a temporary settlement freeze in that area so long as negotiations continued in good faith. If the negotiations allocated some of that land to Israel, building could continue on that land.

I had written an op ed layi-g out my plan, and I brought a copy of it to my meeting with President Abbas. When I showed it to him, he said, “This looks good,” and he passed it on to Saeb Erekat, his close advisor. Erekat read it closely and gave it back to President Abbas, who circled the operative paragraph and signed it, “Abu Mazzen.” He asked me to show it to Prime Minister Netanyahu with whom I would be meeting several days later.

Between the time I met with President Abbas and the time I met with Prime Minister Netanyahu, both delivered their speeches to the General Assembly. Netanyahu reiterated his invitation to sit down and negotiate a peaceful resolution, while Abbas made a belligerent speech accusing Israel of ethnic cleansing and other crimes. He expressed no real interest in negotiating peace. So when I told Prime Minister Netanyahu about President Abbas’ apparent acceptance of my proposal, he was understandably skeptical. But he took a copy of the signed article and put it in his pocket, saying he would certainly give it careful consideration.

It seems clear that nothing will happen until after both the American presidential election and the Israeli parliamentary elections early next year. When those elections are over, I intend to press both sides to consider my proposal.

There are no real downsides for either the Palestinians or the Israelis in resuming negotiations. Everyone knows roughly what a negotiated peace would look like. There would be some mutually agreed upon territorial changes to the 1967 borders, a demilitarized Palestinian state, some military presence along the Jordan River to assure Israel’s security, a realistic resolution of the Jerusalem issue and an abandonment of the so-called Right of Return. There would be no immediate resolution of the Gaza issue, so long as Hamas remained opposed to Israel’s right to exist.

Peace between Israel and the Palestinian Authority is long overdue. The parties have come close on several occasions. Following the two elections, the time will be right for moving in the direction of peace. I hope my proposal will help to facilitate renewed negotiations.