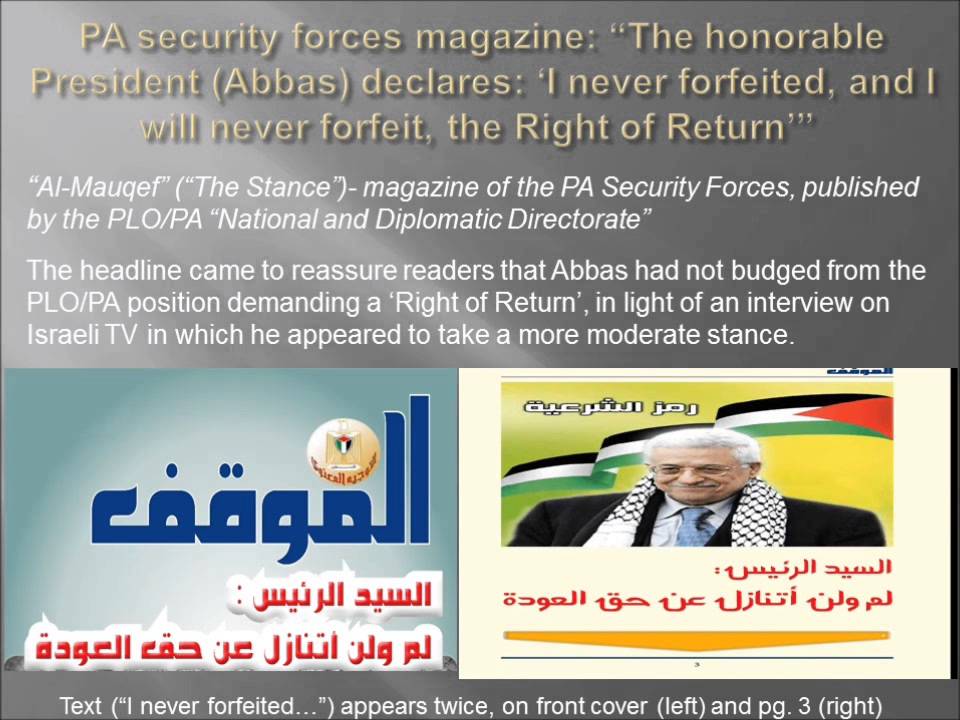 Video: The Culture of Peace and Incitement in the PA Index – 2 December 2012

Pursuant to Abu Mazen’s incitement speech at the UN General Assembly, the Cabinet, received a special briefing on incitement in the Palestinian Authority.

The briefing was presented by Strategic Affairs Ministry Director-General Yossi Kuperwasser, the coordinator of the professional team that is monitoring the issue and which is constantly updating the “Culture of Peace and Incitement Index in the Palestinian Authority.”

In the period under review there was a negative record in expressions of hatred and incitement against Israel as seen in remarks by senior Palestinian Authority officials, on official websites, in the media and in the Palestinian Authority education system. Examples were shown – inter alia – of the use of Hitler’s ideas, the adoration of suicide terrorists, anti-Semitic caricatures, the complete ignoring of Israel on official maps, calls for a return to Jaffa and Haifa, etc.

Abu Mazen’s two recent UN speeches should be especially noted; they included expressions of severe incitement and have greatly contributed to the education towards hatred.

It was also noted in the briefing that the Palestinian education system has no plan whatsoever for encouraging coexistence and an atmosphere of peace and reconciliation.

As long as the Palestinian Authority educates the younger generation to hate, how is it at all possible to talk about peace?

Prime Minister Netanyahu directed that the matter be brought to the attention of the countries that voted in favor of the Palestinian move, which contravenes all the agreements.

Strategic Affairs Minister Moshe Yaalon said, “As long as the Palestinian Authority educates its people toward hatred, and non-recognition, of Israel, there will not be peace. They are sending deep messages and this education is being absorbed by all sections of the populace, especially the younger generation.”