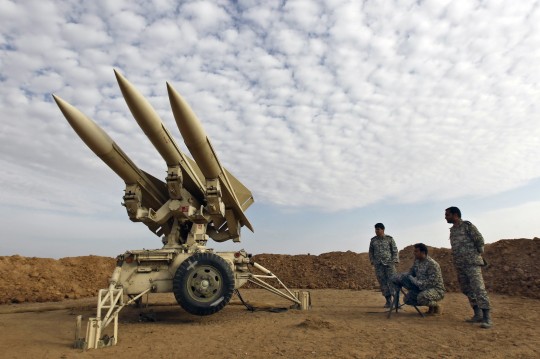 Special operations forces tied to Iran’s navy participated in a series of drills over the weekend in the Strait of Hormuz, a pathway used to ship oil and gas across the globe.

The drills, dubbed “Velayat 91,” are being viewed as a warning sign to the West and Israel that if Iran’s nuclear sites are attacked it will disrupt the world’s oil supply.

Iranian military leaders also emphasized that most of these new weapons and devices were domestically produced, indicating that Western economic sanctions have failed to thwart the regime’s military buildup.

Tehran announced on Monday that it had successfully launched a newly created RAAD surface-to-air missile, according to Iranian press reports. The missiles are meant to target fighter jets, unmanned drones, and various missiles that might be fired by Western forces.

Iranian Rear Admiral Amir Rastegari told the Mehr News Agency that the new RAAD system had been “optimized and installed” for use on warships.

Military leaders also unveiled on Monday several new missiles and torpedoes that Iranian leaders claim to have been developed in their entirety by Iranian scientists.

These missiles include the short-range Nasr cruise missile and other rocket-propelled arms that could be used in a naval confrontation, according to a report by Mehr.

The Nasr cruise missile could be fired from either land or a submarine and obliterate a “3,000 ton watercraft,” according to the report.

“Deployed on shore defensive layers, Nasr smart cruise missile will complement coastal defense artillery system, as it would destroy watercrafts invading the coastal waters,” according to the Mehr report, which is based on information provided by Iranian military leaders.

Tehran also claims to have successfully launched a new stealth submarine that can avoid detection by Western radar systems.

The “diesel submarine has been known as ‘black hole,’” military leaders told Mehr over the weekend.

“It produces the least acoustic signature, with fully sound insulation of the shaft,” the report claims. “The shaft is covered with rubber anti-sonar protection tiles to reduce the risk of detection.”

The stealth submarine is said to be the first Iranian-made submarine to take to international waters since the early 1990s.

Iranian diving teams performed mock operations in the ocean during the drills and cyber attack simulations were performed on Saturday, Reuters reported.