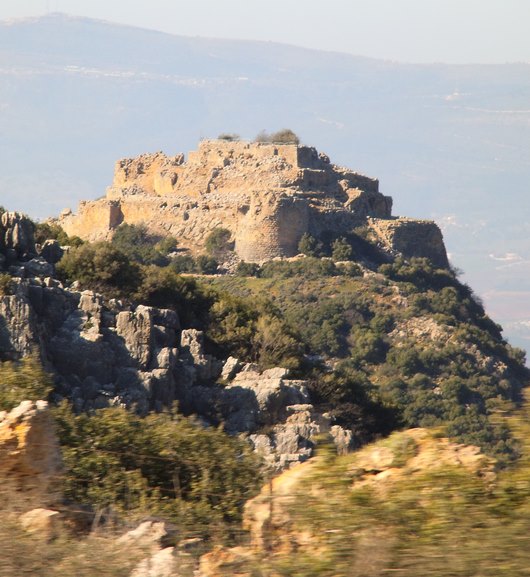 The Golan Heights, where recently I took an early morning drive is known to be filled with mine fields that the Israelis installed to deter Syria from ever sending troops and tanks through it. The Golan also is known for its wineries, but in the future could be known for its oil and gas. Up until now the only drilling on the Golan has been military drills but now there will be drilling for energy sourcesandif that drilling is successful, it could be a game changer. Nimrod’s Castel, a Crusader Castle on the Golan Heights

According to the Globes, “The process of granting the license began following geological tests, which indicated a large potential oil discovery in the southern Golan Heights. On the basis of the findings, last summer, Minister of Energy and Water Resources Uzi Landau declared the Golan as open for oil and gas exploration and production activity. Following the announcement, two license applications were filed with the Petroleum Commissioner for the southern Golan, an area of thousands of hectares.”

What’s particularly interesting about the timing of Israel awarding the licence is that it was done a month before President Obama was set to visit Israel, and what’s even more telling is that Obama did not make any mention of it as being a problem in his recent visit, notwithstanding that the Golan was captured form Syria in the 1967 Six day war. Israeli wind turbines on the Golan 5 km south of Qunaitra. There are plans to develp more:
http://uk.reuters.com/article/2010/04/29/us-israel-energy-wind-idUKTRE63S37320100429
photo by Rhonda Spivak

As the Globes reported before Obama came to Israel in March, “Awarding a drilling license on the Golan could cause an international fracas, given the Golan’s status as occupied Syrian territory under international law. There was no known political intervention in the licensing process, the proximity of the event to Obama’s upcoming visit is coincidental.”

I myself can’t help wonder if the timing of Israel’s granting of the drilling licence is related to the fact that given the chaos and hostilities raging in Syria, and the concern about chemical weapons being used by Assad or falling into the hands of Al-Qaeda, the last thing that the West is going to be concerned about is Israel drilling for oil and gas in the Golan. There is no Western power seriously suggesting that Israel ought to be returning the Golan to Assad or anyone else right now. And if oil and gas are found, I can’t but help think that Israel, which has formally annexed the Golan long ago, will be less and less likely to return the Golan.To that end, the timing of awarding the drilling license may have been very clever on Israel’s part.

The list of the people involved in Genie Energy Ltd., which has been awarded the drilling licence is also interesting. The company is headed by former Israeli minister Effie Eitam, who resides at Moshav Nob on the Golan, and fought against the Syrian Army there during the 1973 Yom Kippur War, where he won a medal for courage. Shareholders include Lord Jacob Rothschild and Former US Vice President Dick Cheney is an advisor.

According to a Feb 28, 2013 article in the Jewish Press, Syria has sent a letter to the UN, protesting the granting of a license to explore for oil and gas in the Golan Heights. It called the Israeli government’s actions a “blatant violation” of what it considers its sovereignty over the Golan Heights. The article notes, “Syria previously has not protested the establishment by Israeli companies of a large winery and a mineral water bottling plant, among dozens of other industrial and tourist ventures in the Golan Heights.” http://www.jewishpress.com/news/breaking-news/syria-smells-oil-protests-israels-golan-heights-exploration/2013/02/28/?src=ataglance

As I read the news of Israel drilling for oil and gas in the Golan, I couldn’t but help think of my Israeli driver who took me through the Golan. He was very knowledgeable of the area, having spent his army duty in the IDF at a base he showed me. “I spent days planting the mines in the Golan,” he said. He told me a story which he said “was the scariest day of my life, a day when I thought I would die.” It happened on the Golan, when it was winter time, when he was a passenger in the front seat of a military jeep. ” Suddenly I looked over an saw that the driver of the jeep had fallen asleep at the wheel, with his head down.” The jeep veered off the road into the mine fields. “I took hold of the wheel, enough so I could put on the breaks, and stop the jeep before we were blown up,” he said. He got on the radio and waited until the army arrived to help him. “I was afraid to move,” until they came to get him and direct him where to walk. “I was lucky to be alive. They showed me afterward that how close I was to going over a live mine.”

Contemplating that the Israelis may eventually learn that the Golan has oil and gas reserves, makes the history of the Israeli capture of the Golan in 1967 all the more fascinating.

I have not long ago finished reading a new 2012 book about ” Moshe Dayan, Israel’s Controversial Hero,” by Mordechai Bar-On published by Yale University Press. In it, Bar- On writes that Moshe Dayan, who was named Israel’s Minister of Defense not long before the Six day war broke out, was “opposed to taking the Golan” (p. 137). Prime Minister Levi Eshkol favoured taking it. As Bar-On writes, Dayan said “Yes, the Golan Heights are a highpoint, but airplanes fly higher”.

Bar-On continues, “He [Dayan] saw no justification for opening a third front. As it was Israel would have a tough struggle to retain its gains after the war. There was no chance that Syria would accept Israel’s conquest of the Golan, and Israel had no interest in adding its defense to the postwar pressures. The thought of further provoking Russia, Syria’s main backer, would not bode well for Israel’s foreign policy.”

But Dayan’s view did not prevail, and here we are some 45 years later, as Syria implodes, Israel is now searching for gas and oil on the Golan.