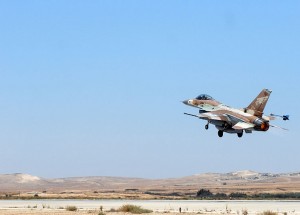 EXECUTIVE SUMMARY: If Israel strikes Iranian nuclear weapons facilities, the paramount American national interest would be dissuading the Iranian regime from rebuilding its nuclear program – not punishing or isolating Israel. Washington should signal to Iran that despite America’s strong objections to an Israeli attack, after such an attack it would support Israel and further pressure the Iranians.

At least one of President Obama’s goals for his recent visit to Israel was probably to obtain Israeli agreement not to attack the nuclear weapons program of the revolutionary regime in Iran without US agreement. The Obama Administration feels very strongly about preventing such an attack by Israel.

Many people assume that if Israel defies the US by attacking Iran without US agreement, the US would join international condemnation of Israel, partly to convince the Iranian regime and the rest of the Muslim world that the US was not complicit in the attack, and partly in response to Israel creating major problems for the US by defying American demands.

While it is possible that this would be the US reaction, the overriding American national interest actually leads in the opposite direction. Even if an Israeli attack goes as planned, the physical damage to Iranian facilities could likely be repaired in perhaps six months to a year or so. Consequently, the most important interest of the US in the wake of an Israeli strike would be to dissuade the Iranian regime from restarting its program of building nuclear weapons.

Condemnation of Israel would be counterproductive, encouraging Iran to conclude that they can get away with rebuilding their nuclear facilities. On the other hand, support for Israel would be evidence of international determination to prevent the rebuilding of an Iranian nuclear weapons program. Added to the delays and cost resulting from the Israeli attack, this evidence could shift the balance of opinion within the Iranian regime against the nuclear program.

The other way in which the aftermath of a limited Israeli attack could lead to a permanent end to the Iranian pursuit of nuclear weapons is if the attack indirectly led to a popular overthrow of the revolutionary regime that now rules Iran.

There is wide public support in Iran for the Iranian nuclear program, which claims not to be a weapons program. But as reported by Michael Ledeen, several polls conducted last year indicate that a large majority of Iranians favor giving up efforts to get nuclear weapons in order to end the economic sanctions against Iran.

If their nuclear weapons production facilities are attacked by Israel, Iranians will have conflicting impulses. On the one hand, they are patriotic and support their country’s right to have a nuclear energy program. On the other hand, many of them are bitterly disillusioned by the regime and inclined to blame it for anything that goes wrong.

Probably the most important determinant of whether there will be popular uprising that the regime cannot put down is popular perception about whether an uprising would succeed or fail. Iranians, like most people, want to make sure that they are on the winning side, and it is widely believed that an uprising could only succeed if it has international support.

If the US and other non-Muslim countries refuse to condemn Israel for attacking the Iranian nuclear weapons facilities – and instead say that the attack was precipitated by the Iranian revolutionary regime’s defiance of the UN and its threats to “wipe Israel off the map” – the Iranian public may conclude that there would be international support for a new regime in Iran. On the other hand, international condemnation of Israel would be seen as foreign support for the revolutionary regime, and would discourage efforts to overthrow it.

The aftermath of a possible Israeli attack would also influence internal Iranian perceptions of the regime’s power. The regime has been trying to deter attacks by threatening dramatic retribution against the US and Israel. It would be very dangerous – and in some cases perhaps impossible – for the regime to deliver on these threats, and if it doesn’t, it may be seen as too weak to hold onto power. The US obviously has a strong interest in deterring retaliatory attacks on US assets in the region and on US allies. But it also has interests in limiting violent retaliation against Israel, because it has an interest in preventing a conflict from getting out of hand, and because it has a general commitment to prevent threats to Israeli national security.

For all these reasons there is a clear American interest in the aftermath of an Israeli attack to send a message to the Iranian regime along these lines: “We opposed and tried to prevent the Israeli attack, but you brought it on yourselves by defying the United Nations and by threatening to wipe Israel off the map. Therefore you have no right to take innocent lives, or to risk war, by violent retaliation against Israel, the US, or any other country for actions taken to prevent you from building nuclear weapons. We will act to protect anyone you threaten to attack.”

There is another reason why the US interest would be against condemning an Israeli attack it had opposed: the US need to be consistent in its messaging.

If Israel strikes, Washington could critique the strike as unnecessary – clearly a matter of judgment – but how could it say that the Israeli action was improper, since it was promising to do the same thing – only better – if and when necessary?

This leads to another question. What would the US say if Israel privately asked: “We know that you think we shouldn’t attack the Iranian nuclear weapons facilities, and we certainly won’t if it is possible to keep trying other measures, but what will you do if we decide that our national security requires us not to wait any longer before attacking?”

For Israel, a strike against the Iranian program would be much less dangerous if it knew that the US would stand by it the next day. And the strike would have a better chance of ultimate success if American diplomacy would weigh-in to prevent the Iranians from rebuilding.

Moreover, if Iran were to be signaled to this effect – i.e., if Iran were to be informed that in the wake of an Israeli strike, America would act to back up Israel – Iran would take the possibility of an Israeli strike more seriously, and this, in turn, could prevent the need for any strike altogether by focusing the Iranian mind on the need to negotiate a diplomatic end to the crisis. There may be very little time left for this option to be effective, but there is still a chance.

In addition, an American promise to support Israel after an unapproved strike might even have the effect of preventing an Israeli strike, because such a promise would increase Israel’s willingness to believe that it can rely on the US to prevent an Iranian bomb if Israel refrains from striking.

There is no public evidence that the US government has in fact addressed these questions, whether in discussion with Israel or within its own closed doors. This appears to be a serious gap in policy-making about the Iranian crisis.

Dr. Max Singer is a founder of the Hudson Institute and a senior research associate at the Begin-Sadat Center for Strategic Studies.He specializes in US defense policy, US-Israel relations, and long-term strategic planning.