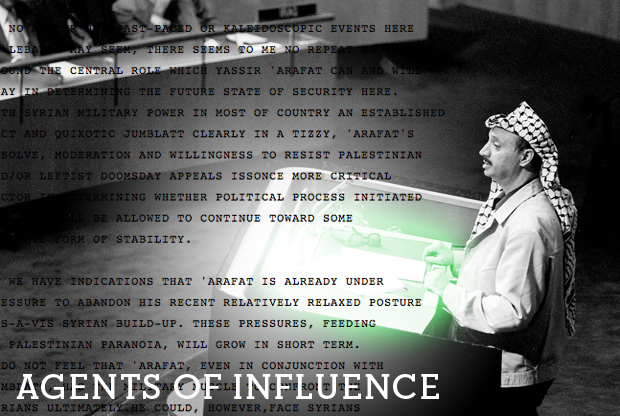 Of the 1.7 million declassified State Department cables-some 700 million words long-that WikiLeaks put online this week as part of the Kissinger Cables, dating from 1973-1976, one records Maryland Sen. Charles “Mac” Mathias’ April 1976 trip to Beirut to meet with Yasser Arafat. At the end of the meeting, a journalist from Arafat’s entourage criticized Washington’s regional policy, telling the Republican senator that, unlike the Soviet Union, “the United States had no strategic policy toward Middle East, only tactics.”

The cable reports that the senator was greatly impressed with this piece of advice. It had been, he later noted to the Beirut embassy staff, “the portion of interview which had stood out and impressed him the most.” But the reality, which the U.S. foreign service officers knew very well, is that the United States did have a strategy in the Middle East and, at least for those years, Arafat played a central role.

Over the past few days, I’ve read hundreds of these vivid, well-reported cables-often written in abbreviated, diplomatic note-taking style-and they offer a window into this fascinating period of U.S. policy in the Middle East. One story the documents tell is an almost epic one about Washington and the Palestinians, with Israel playing a much smaller role than the vaunted reputation of the special U.S.-Israel relationship would lead one to expect. Arafat is the story’s wily hero, its Arab Odysseus, alternately serving and tricking the great imperial power, America, in order to accomplish his single-minded goal: a Palestinian state in the West Bank and Gaza.

U.S. diplomats knew Arafat was a terrorist and that he was responsible not only for the deaths of Israelis but also other American diplomats, like Ambassador Cleo Noel, who was assassinated in Khartoum in 1973 under Arafat’s orders. But Washington overlooked those facts for the sake of winning what it perceived, rightly, to be a much bigger game: the Cold War.

During the Kissinger years, what mattered most in the Middle East to the United States was the Persian Gulf, because of its vast energy resources. The eastern Mediterranean was important only insofar as it was another venue to contend with the Soviets. Accordingly, Kissinger saw the Israelis as a strategic ally capable of vanquishing Soviet assets-including Egypt, which after the 1973 war jumped from the Soviet camp to the American one. But just because Israel was a valued American ally didn’t mean that Washington would turn its back on Arab figures capable of serving larger American interests by thwarting Moscow’s regional ambitions. The cables show that the Americans were keen to have Arafat on their side.

It’s not clear if the Israelis entirely understood how close the Americans were to Arafat and his outfit. For instance, Israel long believed that Arafat’s intelligence chief Ali Hassan Salameh, one of the masterminds of the massacre of 11 Israeli athletes at the 1972 Munich Olympic games, was a CIA asset. The truth is that the so-called Red Prince meant much more to the U.S.-Arafat relationship, serving as one of their key intermediaries and a symbol of the nature of their relationship.

The cables show that two years after Munich, the American ambassador to Beirut, George McMurtrie Godley, met with Salameh-described in the cables as Arafat’s “security adviser”-to negotiate the size of the entourage that Arafat would take to the U.N. General Assembly meeting and how many of them would be allowed to carry guns.

When the embassy explained that none of them would be allowed to take arms into the United States, the cable reports that “Salameh purported to be horrified, reporting that ‘Arafat has already developed notion that USG [United States Government] is trying force him into changing his mind by appearing at UNGA by delaying issuance of visas to his party and by ‘demeaning’ his pride and self-image.” Fidel Castro, Salameh noted to the ambassador, “had appeared armed in New York.” In the end, Arafat got his way and brought his weapon to the General Assembly, where he famously offered his audience a choice between an olive branch and his sidearm.

The Americans weren’t stupid or naive. When Arafat sent Salameh to meet with them, he was telling them who he was, his methods, and his goals. When the Americans agreed to meet with Salameh, they essentially signed off on Arafat. Terrorism, from their perspective, wasn’t in itself an insurmountable obstacle. After all, Washington was engaged in a life-and-death struggle with another nuclear superpower. Compared to a nuclear exchange wiping out large American, Soviet, and European population centers, Arab terrorism was small potatoes.

As Ambassador Godley cabled after the May 1974 Maalot massacre, in which members of the Democratic Front for the Liberation of Palestinian killed 25 Israeli hostages, 22 of them children: “long-term implications of Maalot tragedy on Fedayeen movement and Israeli-Arab relations are even more upsetting than loss of young lives and anguish of Israeli nation.” The American diplomat might have added that the implications for American interests vis-à-vis the Soviets, who controlled much of the Fedayeen movement, were also dire.

To that end, Godley explained in the same cable that the Americans sought to “curb extremist Fedayeen elements… and channel action by more moderate fedayeen into preparations for political discussions rather than violent action.” Arafat, from the perspective of American diplomats, was that “moderate,” even though by any rational standard he was an extremist. To the Americans, he was moderate only by virtue of the fact that he worked with the United States. What Arafat, the father of Arab terrorism, offered was the fact that he was a power on the ground with men and weapons and called his own shots. Unlike other Palestinian factions, he wasn’t beholden to Moscow, or owned by the Syrians, Egyptians, or any other Arab states. In other words, Arafat had made himself available to the Americans, and they scooped him up.

During the Kissinger years, Arafat was important to the United States for a number of reasons. As the cables show, Washington thought he could help stabilize Lebanon. Another cable, in which Salameh describes a rival Palestinian group’s attempt on the life of Jordan’s King Hussein, shows that Arafat’s cadre could offer a window onto the world of international terrorism largely financed and supported by their Cold War rival the Soviet Union.

But most importantly, the United States wanted to put an end to the ongoing Arab-Israeli conflict that they feared was damaging their regional prestige, as well as that of their allies who might eventually be forced to flip sides and sign on with Moscow. Kissinger and his State Department believed that solving this conflict would win the good will of the Arabs and hurt the Soviets-and they saw Arafat as their ace in the hole.

What Arafat wanted in exchange, according to one cable from 1974 was U.S. “support of concept of Palestinian ‘National Authority’ in West Bank and Gaza.” It’s worth noting that Arafat struck the exact phrasing that would be adopted two decades later. However, in the mid-1970s, the problem was that two of Washington’s chief regional allies were against it. Both Israel and Jordan thought the idea of Palestinian self-rule was absurd.

The Jordanians, explained another cable, believed “that in long run Israelis would prefer an agreement soon with Jordan rather than hanging on and leaving way open only for Arafat or someone like him.” Jordan of course had another reason for wanting to hold on to the Palestinian card-they were struggling with the Syrians and Egyptians for regional influence-but their assessment was correct. The Israelis wanted nothing to do with Arafat.

Another cable from the period describes a meeting between the American ambassador to Israel and then Israeli Defense Minister Shimon Peres, who “confirmed Israel’s refusal to deal with PLO or accept a Palestinian state on the West Bank.” “Why,” the future author of The New Middle East asked, “introduce a tragedy just for good public relations?”

Then Labor Minister Yitzhak Rabin laid out his objections in the strongest possible terms, captured in a 1974 cable. Rabin, who would become the father of Oslo, “pointed out that a proposal for an independent Palestinian state in the West Bank in the context of an association with Jordan and Israel was a non-starter primarily due to Palestinian hostility to Israel. They could not, therefore, be conned into an arrangement whereby they are accorded nominal independence under the ‘auspices’ of the Israeli-and probably Jordanian-security forces.”

Except that’s exactly the deal that Rabin signed in 1993, some 20 years after Arafat gave birth to the idea. The Americans sponsored it not just as part of the peace dividend, but also, as we see now, to reward a useful, though not always trustworthy, Cold War ally. The United States got what it wanted, victory over the Soviets, and so did Arafat, his Palestinian National Authority in the West Bank and Gaza. For a short while, Israel thought that it, too, got what it wanted-a lasting peace with its Palestinian neighbors. But there’s no evidence-not in the cables and nowhere else either-that was ever part of Arafat’s dream.