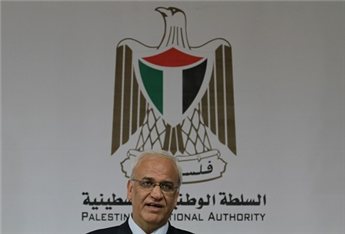 BETHLEHEM (Ma’an) — The PLO’s top negotiator said Tuesday that a concession by the Arab League that Israel and the Palestinians trade land was already an official position.

“This is not something new,” Saeb Erekat said in a statement.

“The Arab delegation presented the official Palestinian position: Upon Israel’s unequivocal acceptance of the two-state solution on the 1967 border, the State of Palestine as a sovereign country might consider minor agreed border modifications,” he said.

Erekat added: “The Arab League delegation ratified the Arab Peace Initiative, which has been endorsed by 57 Arab and Muslim countries…. Israeli rejection of this initiative shows once again that the Israeli government lacks of a peace plan. Rather, it is fully engaged in further colonization and attacks against Palestinian rights and regional stability.”

At a meeting in Washington on Monday, US Secretary of State John Kerry met with top Arab League officials to discuss the 2002 Arab Peace Initiative, a Saudi proposal which would see 22 Arab countries normalizing ties with Israel in return for a withdrawal from lands it occupied during the 1967 Six Day War.

Speaking after the talks, Qatari Prime Minister Hamad bin Jassim, who led the delegation, agreed that any deal should be based on a two-state solution with the borders defined by the lines which existed before June 4, 1967.

But he also expressed support for a proposal by US President Barack Obama for a “comparable and mutual agreed minor swap of the land” between Israelis and Palestinians to reflect the realities of the burgeoning communities on the ground.

“This is very good news,” she told army radio. “It’s definitely an important step — I welcome it.”

“Let’s talk about it — we are ready for changes, something which will allow the Palestinians, I hope, to enter the (negotiating) room and make the necessary compromises,” she said after Arab League representatives said for the first time they would accept the concept of land swaps in the context of an Israeli withdrawal to the pre-1967 lines.