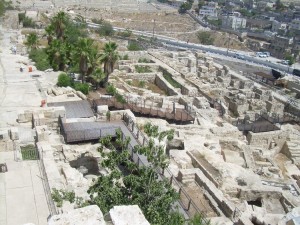 Tens of thousands will visit the Old City on May 8 for Jerusalem Day, the anniversary of the reunification of Jerusalem during the 1967 Six Day War. While celebrations go on above ground, new excavations underneath and around the Old City are being uncovered and opened to the public, peeling back layers of history and expanding understanding of events in the center of the Jewish universe.

Old City expert Rabbi Barnea Selevan, a veteran licensed tour guide and co-director of Foundation Stone, is excited about a series of archeological digs taking place in the vicinity of the Western Wall. For the past several years, the Western Wall Heritage Foundation has sponsored excavations at the back of the plaza, and workers have uncovered part of a Roman colonnaded street dating back to the 2nd century C.E.

But what was ignored until recently, according to Selevan, are several small stone buildings, overgrown and blocked by material from the dig.

“When I look down from the street in front of the Chabad building several levels above the site, those old walls are the most exciting thing I see,” Selevan tells JNS.org. “There’s no question they’re from First Temple times.” Seals from the Temple were found nearby. The walls, according to some archeologists, are from homes that were abandoned but not destroyed by the Roman onslaught on Jerusalem in 70 C.E.

Selevan notes that the streets exposed at the back of the plaza lead to the Temple Mount in the Robinson’s Arch area and provide evidence that the Romans stayed in Jerusalem and used the Temple Mount during the early Roman period.

Plans call for further excavations underneath the plaza and then to open the underground area, much as the Western Wall tunnels have been open to the public since the 1990s. Selevan says that excavations are continuing in the tunnel area too, and beautiful rooms with ornate capitols from First and Second Temple times are being prepared to be open to the public.

In today’s Jewish Quarter that lies above the Western Wall Plaza, Selevan recounts the “delicious” discovery of a “fancy Roman bathouse” two stories underground on Ha’omer Street, that was found in the course of construction of a new mikveh (ritual bath) for men. “In all likelihood, the bathhouse was used by the Roman 10th Legion-the same guys who thought they were wiping out the Jews,” he says. Dr. Yuval Baruch, Jerusalem District Archaeologist at the Israel Antiquities Authority, reveals that despite the extensive archaeological excavations in the Jewish Quarter, so far not even one building has been discovered there that belonged to the Roman legion.

“The absence of such a find led to the conclusion that Aelia Capitolina, the Roman city established after the destruction of Jerusalem, was small and limited in area,” he tells JNS.org.

“The new find, together with other discoveries of recent years, shows that the city was considerably larger than we previously estimated,” Baruch says. “Information about Aelia Capitolina is extremely valuable and can contribute greatly to research on Jerusalem because it was that city that determined the character and general appearance of ancient Jerusalem and [the city’s appearance] as we know it today. The shape of the city has determined the outline of its walls and the location of the gates to this very day.”

The trauma of the Roman plunder of Jerusalem is heavily evidenced at several locations in the City of David, located a few hundred yards from the Western Wall to the southeast of the Dung Gate.

Aharon Horowitz, Director of Megalim, the Institute of Jerusalem Studies of the City of David, points out that the drainage channel underneath the Herodian-era street in what is known as the Pilgrims Ascent area of the City of David was used by Jews hiding from the Romans. A Roman sword was found in the channel.

According to University of Haifa archaeologist Ronny Reich, who has worked in the area for decades, the smashed paving stones indicate that the Romans broke through the street to the channel below to drag out the Jews who tried to flee toward the Kidron Valley in the last days of the siege.

Over the past year, the ascent has been opened and visitors can walk along the Herodian Road to the southern wall excavations at The Jerusalem Archaeological Park – Davidson Center.

Across the road from the City of David Visitors Center is the Givati Parking Lot site, the largest archeological excavation in Jerusalem. “Every day there are new finds here,” Horowitz tells JNS.org. “There are remains here of every strata of Jerusalem history.”

One of the most magnificent is the floor of a building considered by some experts to be the 1st-century palace of Queen Helena of Adiabene, who converted to Judaism. A huge Roman mansion from the 3rd century was also uncovered in the former parking lot, and hundreds of Roman and Byzantine artifacts have been unearthed inside, including a gold earring inlaid with pearls and stones. Israeli Prime Minister Benjamin Netanyahu recently chose a facsimile of the earrings to present to American First Lady Michelle Obama when she visited Israel with her husband.

Besides the digs and excavations below today’s city, significant conservation and restoration has been completed on the Old City walls in recent years. Over the past six years, the Jerusalem Development Company, Prime Minister’s Office and Israel Antiquities Authority have completed sprucing up and restoring all four kilometers of the city walls erected in the 16th century by Sultan Suleiman, and all seven gates of the Old City. The last time any rehabilitation work was done on the walls was in the 1920s, during the British Mandate period. A tiny button-sized object of fired clay stamped with a two-line Aramaic inscription meaning “Pure for God,” one of the most intriguing archaeological finds of recent years in Israel. Photo: Israel Antiquities Authority.

Last October, a delegation from the Jewish National Fund of Canada dedicated a park containing restoration of the grounds in front of a stretch of the Old City wall, south of Jaffa Gate.

At the ceremony, Shuka Dorfman, head of the Israel Antiquities Authority noted, “These impressive walls attest to the building and destruction of seven different regimes, and include remnants from the First Temple Period. Our preservation activities concentrated on the park’s main promenade and on the antiquities along the wall.” Today, visitors can walk along an accessible path along the wall between Jaffa Gate and Zion Gate, touch the ancient stones, and peer into the small caves dotted along the base of the wall.

Other discoveries of a much smaller nature will end up in museum displays, but still tell a story about Jewish life in Temple times. A tiny button-sized object of fired clay stamped with a two-line Aramaic inscription is one of the most intriguing finds of recent years.

According to archeologists Eli Shukron of the IAA and Ronny Reich, the meaning of the inscription is “Pure for God.” Like a modern-day kashrut seal, the object was probably used to mark products or objects that were brought to the Temple and had to be ritually pure.

“This stamped impression is probably the kind referred to in the Mishnah,” Shukron and Reich said. “To the best of our knowledge, this is the first time that such an object or anything similar to it was discovered in an archaeological excavation, and it constitutes direct archaeological evidence of the activity on the Temple Mount and the workings of the Temple during the Second Temple period.”