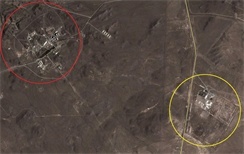 Three explosions heard in the area of the Bidganeh area west of Tehran were reported briefly on Tuesday. While the Iranian regime is trying to hush the matter, it can be determined now that the blast occurred at 14:00 in the Raja-Shimi chemical industrial complex, which is affiliated with the Iranian Ministry of Defense and deals in the production of chemical materials for military use.

Opposition officials have reported that considerable damage was caused to the facility and the authorities have instructed local teams not to discuss the number of casualties at the scene. The complex in question has been suspected throughout the past decade of being part of an Iranian program for developing chemical weapons. The factory processes different types of chemicals that can also be used to produce fuel for surface-to-surface missiles. This morning, the Iranian Deputy Interior Minister for Security Affairs Ali Abdullahi explained that the reason for the explosions that were heard well in the area of Tehran was a controlled and planned detonation of old ammunition.

Does the Iranian version sound familiar? This was also the version that Iranian authorities stated immediately after the November 2011 blast that rocked the military complex near the village of Bidganeh, the location of the Revolutionary Guards’ fifth missile division, responsible for the launch of Shahab-3 and Shahab-4 missiles. Days later it was revealed that the blast took place at the center of a missile research center which developed solid engine fuel for long-range surface-to-surface missiles. The blast, which was caused during an advanced solid engine fuel test, eradicated the center and resulted in the deaths of 17 of center’s people, including General Hassan Tehrani, the head of Iran’s missile program.

The facility presently being reported about is located on the same path that passes towards the area of the Safa industrial area, at a distance of two kilometers from the missile research center, the activity of which has since been transferred to another site.

In the recent period, Iran’s Minister of Defense, General Ahmad Vahidi and his deputy, General Majid Bokaei, have discussed Iran’s breakthrough in the development of the Sajil ballistic missile, which can reach any target in Israel as well as portions of the European continent. The Sajil is a two-stage ballistic missile propelled by solid fuel, and Iran is striving to extend its range.

This week, Deputy Minister Bokaei discussed the advanced development of solid fuel (a development that was halted in the wake of the 2011 explosion) and promised to reveal the accomplishment soon. Bokaei spoke during a memorial ceremony for one of the operatives who died in the November 2011 explosion at the missile base.