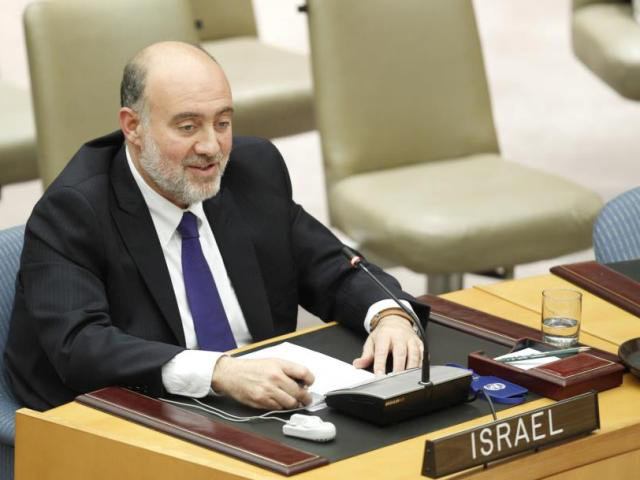 Copyright: Israel Mission to the UN

“Earlier this week, I wrote a letter of complaint to the UN Secretary-General [see below] regarding an UNRWA official who posed for photos with a map that labeled the State of Israel as ‘Palestine.’ In response, an UNRWA Spokesperson denied that the map in question “erase[d] Israel,” and claimed the map showed the region before Israel’s creation in 1948.

UNRWA’s grasp of history and geography is nothing short of appalling. If this map were in an atlas, it would have to be shelved in the fiction section of the bookstore.

First, the map features a large Palestinian Liberation Organization (PLO) flag. It’s quite something for UNRWA to insist that the map predates the creation of Israel, given that the PLO only adopted this flag in 1964.

Second, in Arabic, the map labels the region “Arab Palestine,” an entity that did not and still does not exist. Allow me to offer a brief history lesson to UNRWA: from 1922-1948, the region was known as the “British Mandate for Palestine.”

Instead of posing for photos with a map that denies Israel’s existence, UNRWA officials should exit the bookstore’s fantasy section and find a map that directs them to the moral center of their organization.”

I wish to draw your attention to a startling event that took place earlier this month. On May 2, 2013, officials from the United Nations Relief and Works Agency (UNRWA) attended an event in southern Lebanon. At the event, Ann Dismorr, Director of UNRWA Affairs in Lebanon, posed for photos with a map that erased the State of Israel and identified the geographic area as “Palestine”.

The map identified “Palestine” as the geographic area extending from the Mediterranean Sea to the Jordan River. The State of Israel was conspicuously absent. It doesn’t take a PhD in Middle Eastern history or geography to realize that a map of the Middle East that doesn’t include Israel is deeply and profoundly prejudiced.

Many in the international community doubt UNRWA’s impartiality and motives. Israel supports UNRWA’s important humanitarian work; however, actions that encourage incitement, conflict and, ultimately, violence undermine this work. Embracing a map that rejects Israel’s right to exist is outrageous and contrary to the integrity, independence and impartiality that UNRWA stands for.

Knowing the importance that you place on coexistence and understanding between peoples, I am sure that you will be dismayed to learn about this event. The integrity and impartiality of UNRWA demands that the UN immediately look into this matter.

Please accept, Excellency, the assurance of my highest consideration.