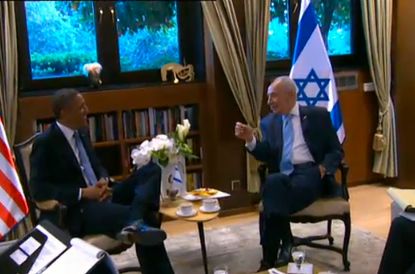 Normally, I would not raise a big stink about Shimon Peres’s 90th birthday bash.

When it comes to birthdays, I salute that great Western Jewish tradition that loves to celebrate at least twice a year by the Jewish lunar date AND the Western calendar.

Whether you go from right to left or left to right, we can use a little more joy in our life. This is especially true when marking the birth of a person of great age and deeds.

Yet, the Peres festivities are not just a personal party but a national and even international series of events for Israel’s president. They are annoying for several reasons:

President Peres is not King-For-A-Day, the Queen of England or Cinderella. Having Barbra Streisand come and sing is great, but Peres does not need to be driven around in a magical pumpkin drawn by flying horses (not really !!) or flown over fields whose wheat has been cut to form his facial features ( really !!).

It is fair to give the man a good time and recognize his achievements, which include:

It is also right to recall some of the memorable failures and lapses in the Peres career:

Like Sharon, Peres went to great and immoral lengths to get partisan or personal success. Some of these episodes (such as the so-called Lavon Affair or “ha-eseq ha-bish” of 1954, or “ha-eseq ha-masriah” “the stinky caper” of 1990-where he tried toppling a government with chicanery -are still murky. Some are crystal clear. Peres lied about leaving partisan politics in 2005 and grabbed the Labor Party leadership while pretending to be an elder-statesman party caretaker. He then lost a primary to Amir Peretz, and then, ignominiously, defected to the newly formed Kadima Party of Sharon, betraying the same Labor Party he sought to lead only weeks before. This tradition of losing elections and changing parties like dirty socks is certainly not something for which Peres deserves a Nobel Prize.

Many who write or comment on Shimon Peres talk about his French-speaking romantic spirit, but it is Peres’s romantic notions about Arafat, Mahmoud Abbas and the Palestinian movement that are the saddest epitaph to Peres’s long and colorful career.

Dr. Michael Widlanski, is the author of Battle for Our Minds: Western Elites and the Terror Threat published by Threshold/Simon and Schuster. He was Strategic Affairs Advisor in Israel’s Ministry of Public Security, and he will be a visiting professor at University of California, Irvine.