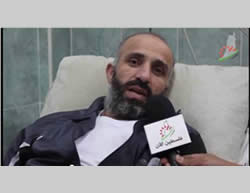 1. Ayman al-Sharawneh is a Hamas operative from the Hebron region who was sentenced to 38 years in Israeli prison for several terrorist attacks, such as an IED bombing in Beersheba which injured 19 people. He was released in the Gilad Shalit prisoner exchange deal and redetained after having gone back to terrorist activity. He was on a hunger strike for 53 days, during which time there were demonstrations for his release in the West Bank as part of the “prisoners’ protest”. Eventually he was allowed to go to the Gaza Strip for ten years instead of coming back to jail and serving his sentence (March 2013). In a recent interview to a Lebanese TV channel, he said that he went back to military activity in the Izz al-Din al-Qassam Brigades, Hamas’ military-terrorist wing.

2. Ayman al-Sharawneh’s return to terrorism reflects a broader trend of terrorists released in the Gilad Shalit prisoner exchange deal going back to the circle of terrorism. This past year the Israeli security forces have exposed a number of networks in Judea and Samaria some of whose members are terrorists released in the Shalit deal, as well as networks handled by released terrorists from the Gaza Strip and from Arab countries, such as Saudi Arabia, Jordan, and Qatar. Many of those terrorists and their handlers belong to Hamas (see Appendix for details).

3. The released terrorists’ re-involvement in terrorism is a blatant violation of the Egyptian-brokered release agreement.

4. Ahmed Shaldan, the Lebanese Al-Mayadeen TV’s reporter in Gaza City, has recently produced a story about the released terrorist Ayman al-Sharawneh going back to terrorist activity in the Izz al-Din al-Qassam Brigades, Hamas’ military wing. The reporter interviewed Al-Sharawneh in his Gaza home and accompanied him on military activity in the east of the Gaza Strip, near the border with Israel. According to the reporter, every Thursday night Al-Sharawneh puts on his uniform, takes his weapon, and goes out on a night operational activity. The report went on to say that Al-Sharawneh was unaffected by the many years he had spent in Israeli jail, and that he still considered taking part in jihad a necessity. Al-Sharawneh said that the Izz al-Din al-Qassam Brigades exist to protect their land and liberate the West Bank, Temple Mount, “all of Palestine from the river to the sea”, and the Palestinian prisoners detained in Israel (Lebanese Al-Mayadeen TV, May 27, 2013).

5. Ayman Ismail Salameh Sharawneh, a Hamas operative from Dura, near Hebron, was detained for his involvement in theIED bombing in Beersheba in May 2002 which injured 19 people;an attempt to abduct an IDF soldier; and his involvement in shooting at IDF soldiers. He was sentenced to 38 years in prison but released in the Gilad Shalit prisoner exchange deal in October 2011. He immediately violated the terms of his release and returned to terrorist activity, and was redetained on January 31, 2012. A request was submitted by Israel’s legal system to revoke his eased sentence and return him to prison to serve the remainder of his term.

6. After his return to prison, Ayman al-Sharawneh went on a 53-day hunger strike. In the first half of March 2013 he submitted a request asking that he be permitted to stay in the Gaza Strip for ten years instead of serving the remainder of his sentence. The request was approved by the Israeli security authorities and the Israeli legal system. He was released and entered the Gaza Strip, where he was given a warm welcome by Hamas. In an interview given from his hospital bed soon after his arrival in the Gaza Strip, he said that the only way to release prisoners was to abduct Israeli soldiers (Al-Quds TV, March 18, 2013).

Demonstration in the village of Dura (Hebron region) for the release of Ayman al-Sharawneh (Al-Quds TV, March 3, 2013)

The phenomenon of released operatives’ return to terrorism

8. Also of note is the involvement in terrorist activity of released terrorists who were deported to other countries under the deal. Several cases recently exposed by the Israeli security services clearly demonstrate that these operatives (especially those belonging to Hamas) are deeply involved in creating terrorist networks in Judea and Samaria. Saudi Arabia and Jordan in particular are used as meeting places between Judea and Samaria residents and their handlers, as evidenced by the exposure of terrorist networks in the period since the Gilad Shalit prisoner exchange deal (see Appendix for details).

1. In October 2011, an Egyptian-mediated deal was reached between Israel and Hamas to free Gilad Shalit in exchange for 1,027 Palestinian prisoners and security detainees, nearly one quarter of all terrorists imprisoned in Israel at the time. Following the release, Hamas achieved considerable prestige with the Palestinian public and the prisoners’ protest gained momentum.

2. Determined to make the most out of the deal, Hamas launched a media campaign that emphasized the success of terrorism (“resistance”) and preached for abducting more Israelis as the preferred means of releasing prisoners. The Palestinian Authority also welcomed the release of the prisoners, and Abu Mazen decided to award a five-thousand dollar presidential grant to all freed terrorists-those who remained in the PA-administered territories as well as those who were deported elsewhere. Abu Mazen also issued an order for medical centers to provide complete medical care free of charge to all those released in the Gilad Shalit deal (Pal Today, October 23, 2011).

3. In the past year, the Israeli security forces have exposed several networks in the West Bank whose members include ex-convicts, particularly those released in the Gilad Shalit prisoner exchange deal. The networks attempted to create terrorist cells, recruit operatives, and carry out terrorist attacks. The following are several examples (taken from the ISA website):

A. In January 2013, the Israeli security forces detained approximately 20 Hamas operatives from the Hebron region. They belonged to a network planning to carry out terrorist attacks, especially abductions, to bargain for the release of terrorist operatives imprisoned in Israeli jails. The operatives’ plans for the abduction were well advanced. They had looked for a safe house and had contacted an Israeli citizen, who would serve as their driver. At the time of their detention more than ten different kinds of weapons were found in their possession, all of them intended to be used during the planned attacks. Most of the operatives detained had already served long jail sentences in Israel, mainly for their involvement in terrorist activity. They maintained contact with Hamas operatives outside Judea and Samariato obtain support, instructions, and funding. Most of their contact was withHusam Badran, a Hamas terrorist operative released from jail in Israel as part of the Gilad Shalit prisoner exchange deal. In 2004 Badran was sentenced to 17 years in jail for his involvement in suicide bombing attacks during the second intifada. Released in October 2011, he was deported to Qatar.

B. In February 2013 it was reported that the Israeli security forces had exposed a terrorist network in the Hebron region which belonged to Hamas’ military-terrorist wing. The network was handled by a Hamas operative who had been deported to the Gaza Strip in the Gilad Shalit deal. The terrorist operatives planned to carry out shooting attacks and detonate IEDs, but they were detained before they could put their plans into operation. One of operatives had a pipe bomb in his possession when he was detained. The network was headed by Munjed Mousa Diab Juneidi, 23, from Hebron. He admitted in his interrogation that he had maintained contact with Bassel Himouni, a Hamas operative released in the Gilad Shalit prisoner exchange deal and deported to the Gaza Strip.

C. In March 2013Amir Barakat, born in 1988 and a resident of Nablus, was detained after he returned from a pilgrimage to Mecca in February 2013. During interrogation by the ISA he admitted that when he was in Mecca he met with Amir Dukan, a terrorist operative from Nablus who was released in the Gilad Shalit prisoner exchange, deported to the Gaza Strip, and joined Hamas. Amir Dukan proposed that Amir Barakat carry out a shooting attack along the Nablus bypass road or attack the Hawara checkpoint with a hand grenade. He told him he would be paid $60,000 for an attack. Returning from Saudi Arabia, Amir Barakat contacted Amir Dukan and said he was prepared to carry out an attack and was trying to acquire a gun.

D. In January and February 2013 the Israeli security forces detained a Hamas messenger and his handler who were attempting to smuggle money from Hamas into the West Bank to finance terrorist attacks. The two were brothers, residents of the Far’a refugee camp near Nablus. Detained at the Allenby crossing, the messenger was found to have €10,000 and $900 hidden in cigarette packs. Interrogated by the Israel Security Agency, one of the brothers admitted his brother had sent him from Jordan to smuggle in money from Hamas in order to finance terrorist networks. He received the funds in Jordan from a messenger sent by Amir Dukan, a Fatah/Tanzim operative. Amir Dukan was released in the Gilad Shalit prisoner exchange deal and transferred to the Gaza Strip, where he contacted Hamas and other terrorist organizations.

E. In May 2013 the ISA detained Hamas operative Baker Atallah Samih Sa’ad, from the village of Mazra’a al-Sharqiya (in the Ramallah region), who planned to carry out abductions and shooting attacks. His interrogation revealed that in April 2013 he met in Jordan with Hamas operative Hisham Abd al-Qader Ibrahim Hijaz, from the same village, who had been released in the Gilad Shalit prisoner exchange deal. Hijaz recruited him to Hamas and instructed him to plan abductions and shooting attacks against Israeli soldiers and civilians. He was told that close to the date of the attacks a messenger would bring him four weapons. He was also instructed to raise money for his activities. Baker Atallah Samih Sa’ad agreed to go to Sudan for military training. Hisham Abd al-Qader Ibrahim Hijaz, Samih Sa’ad’s handler, was responsible for the deaths of ten Israeli civilians and soldiers in terrorist attacks he carried out. He was sentenced to ten consecutive terms of life imprisonment but released in the Gilad Shalit deal and deported to a foreign country. Today he lives in Qatar.