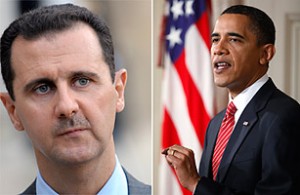 One day people will ask how the United States and several European countries became involved in mass killings, genocide, corruption, arms smuggling, and the creation of another anti-Western and regionally destabilizing government. Even if a single Western soldier is never sent, the West is on the verge of serious intervention in Syria. The choices are unpalatable and decisions are very tough to make but it appears to be still another in a long history of Western leaps in the dark, not based on a real consideration of the consequences.

At least people should be more aware of the dangers. As I entitled a previous book on Iran (Paved with Good Intentions), the road to Hell is paved with good intentions. People are dying and suffering in Syria. That’s true. But will this make more people or fewer people die and suffer?

So now we are seeing the trial balloons rise. As the Bashar al-Assad regime proves to be holding on-but not recapturing the country or winning the war-the West is panicked into sending aid to the rebels. In fact, the government is merely holding the northwest area (where the ruling Alawite group lives), the region along the Lebanese border (with Hizballah’s help), Damascus (where the best troops are based and there is a favorable strategic situation in the army holding the high ground), and part of Aleppo. It seems that U.S. decisionmakers are panicking over these relatively small gains. If the Syrian army plus Hizballah tries to advance too far it will stretch its resources then and face a successful rebel counteroffensive.

President Barack Obama is said to be close to sending weapons to carefully chosen rebel units who are moderates. Now, pay close attention here. The Western options for giving assistance are:

The Syrian Islamic Liberation Front. This is Muslim Brotherhood type people including, most importantly, the Farouk Brigades from the Homs area and Aleppo’s Tawhid Brigade. Around 50-60,000 fighters in total who are autonomous.

Do you want to give arms to them? Weapons that might soon end up in the hands of (other) terrorists? Weapons to be turned against not only Israel, but Jordan, Saudi Arabia, U.S. diplomats, and who knows who else?

Or perhaps you like the Syrian Islamic Front (SIF), an alliance of more hardline Islamist forces, including Ahrar al-Sham from the north. Ahrar al-Sham is probably around 15,000 fighters. The SIF as a whole probably around 25,000. These people are Salafists meaning that the Brotherhood is too moderate for them. They are the kind of people who attack churches in Egypt, who want to wage jihad alongside Hamas, and so on.

Do you want to arm them so they can establish another Sharia state?

How about Jabhat al-Nusra, the al-Qaeda franchise with around 6,000 fighters and reportedly the fastest growing militia.

Want to give guns to those who committed the September 11, 2001, attacks and the Benghazi attack?

Of course not! You want the Free Syrian Army (FSA), headed by the untested General Salim Idris, who Senator John McCain met with. Now those are moderates who, after all, are just led by former officers in the repressive, historically anti-American Syrian army. And the FSA is just not a serious factor in military terms. The West will say it supports the FSA; the FSA will be pushed aside by an Islamist regime if it wins, its Western-supplied weapons seized even during the course of the war. Moderates-even if we define radical Arab nationalists as moderates-don’t have the troops on the ground. It’s too late to organize and train a moderate force now. That should have been done two years ago.

On the political level, U.S. pressure failed to force the Muslim Brotherhood-dominated exile leadership to add the real political moderates! Even as financial aid is being (temporarily?) withheld the “official” opposition won’t expand its base. How about withholding all money and aid until they yield or choosing a new official leadership? If the United States can’t stop-or doesn’t want to-the Brotherhood from dominating an exile leadership how is it ever going to do after a victory in the civil war?

So that’s not a solution either. Because the FSA is closely aligned with the Muslim Brotherhood forces. Many of its soldiers are Brotherhood, Salafists, or even al-Qaida sympathizers. Some have even been defecting to al-Qaida, presumably with their weapons. The FSA is not ideologically moderate, consistent, or-except for its officers-anti-Islamists. And it is very weak, weaker even then the al-Qaida supporters.

Yet that’s not all. Given the mixing up of the groups and their strategic requirements, a weapons’ system that is given to the FSA may easily end up in the hands of the Syrian Islamic Liberation Front, Syrian Islamic Front, or Jabhat al-Nusra. That may happen due to the necessities of war or sheer bribery or defections.

And when the war is over or deadlocked, those arms are going to flow out of Syria to every terrorist group in the world.

Finally, how many arms will be needed to bring a rebel victory? You can predict what will happen: more and more will be demanded; if just a bigger force is supplied the rebels will promise victory. It’s a slippery slope. And then will the need for direct intervention be demanded since just the supply of weapons alone isn’t sufficient? How directly is the United States willing to confront Russia, Iran, and Hizballah? Is it prepared to do so? Maybe it should be but it’s not.

So the supposedly simple concept-alas, two years too late-of let’s support the moderates doesn’t mean much anymore. Granted if you want to find the least bad solution, backing the FSA sounds good. In the end, though, what will actually happen?

Ethnic massacres? How is the United States going to stop them? The Alawites, Shia (there are a few) Muslims, and Christians are in the greatest danger, so is anyone not sufficiently a pious Sunni Muslim, and perhaps also Kurds and Druze. The FSA cannot or will not prevent massive killings.

Wasn’t it UN Ambassador Samantha Powers the genocide expert (which shows how little you need to know to be hailed as an expert) who talked about “responsibility to protect?” Didn’t she, and U.S. government policy begin by talking about saving Libyan civilians and end with a Libyan murder of American officials?

Meanwhile the UN has asked for $5 billion in humanitarian aid to Syria, much of which will go to neighboring countries to help refugees. There are now said to be 1.6 million refugees with that number perhaps to double by the end of the year. The need is desperate. Up to one-half the population of the country needs help.

But who would administer that help? Presumably, no aid would be handed out to the regime to use in areas it controls so other than Jordan, Turkey, and Lebanon to help refugees the money would end up in the hands of al-Qaida, the Salafists, and the Muslim Brotherhood to steal, pay their own people salaries, and use to consolidate their power over different areas.

The United States is considering taking in hundreds of thousands of people who would probably be mostly resettled in California, Illinois, Florida, Pennsylvania, Maryland and Virginia. Power and National Security Council director Susan Rice are known to favor receiving many refugees.

Yet the policy is based on an illusion. Let’s say that weapons are given to the rebels. Will they win the war? Will that reduce civilian casualties? Which side will kill more people? Is a rebel victory going to make Syria a better place, more of a democracy? How many more refugees would a rebel victory generate? Say about 30 percent are Alawites, Christians, and Druze who would be oppressed by a rebel triumph, as would relatively secular Sunni urban middle class Muslims. They might flee the country. How many new wars will come out of the Syrian civil war?

This does not in any way mean one should want the Assad regime-which is a pro-Iran, pro-Hizballah, oppressive and anti-American government-to win. Yet it isn’t winning the war but merely making local gains to control the minimum territory for its survival.

Let’s put it this way: a U.S. and Western intervention in Syria is more problematic than the interventions in Afghanistan, Iraq, and Libya put together. It very well might produce a worse political solution than in Egypt (where cabinet members discuss how the United States is an enemy against which war might be waged) or Tunisia. It can almost be guaranteed to be worse than Iraq.

This is a very dangerous, risky, and likely failed policy that is being set in motion here.