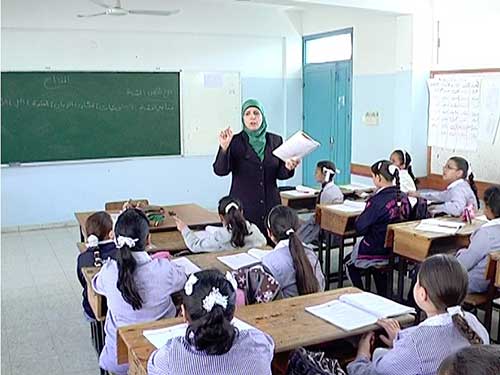 UNRWA, which serves half a million Palestinian pupils in UNRWA schools,now seeks new funding for UNRWA summer camps and for the new school year.

The Center for Near East Policy Research, which has examined UNRWA policies over the past 24 years, asks donor nations to place conditions on the funding….because of the UNRWA curriculum.

The Center, directed by David Bedein, held an informal briefing for foreign diplomats and reporters at the Knesset on June 24th on the subject of the UNRWA curriculum.

Dr. Arnon Groiss, a senior journalist and PHD in Islamic Studies, was the presenter. Dr. Groiss served as Director of Research for the Institute for Monitoring Peace and Cultural Tolerance in School Education (IMPACT-SE) between 2000 and 2010, during which time he translated textbooks from the Palestinian Authority, Saudi Arabia, Jordan, Egypt, Tunisia, and Iran.

At the briefing, attended by officials from Canada, Norway, Australia, Egypt, and Great Britain, together with senior officials of the Simon Wiesenthal Center and the International Christian Embassy, Dr. Groiss presented the findings from his decade-long research in translating and analyzing Palestinian Authority schoolbooks used in UNRWA classrooms. (2)
The event, hosted at the Bayit HaYehudi Conference Room, welcomed Ayelet Shaked, Knesset member of the party, which is part of the government coalition.

At the briefing, Shaked noted that many Knesset members feel that UNRWA policies present an obstacle to any peace building process in the region, and asked that donor nations carefully monitor the funds that they contribute to UNRWA schools, because these schools are the place where the next generation is being incited to continue the war against Israel.

Dr. Groiss’s briefing on UNRWA education could not have been timelier, coming four days after Catherine Ashton, the E.U. Commissioner on Foreign Relations appeared at an UNRWA school in Gaza on World Refugee Day, where she declared that the E.U. must continue to be UNRWA’s “strongest supporter.”

UNRWA is now conducting an energetic you tube campaign with donor countries in which it presents itself as promoting an innocuous curriculum filled with summer sports.

Few decision makers of donor nations to UNRWA can see through this misleading campaign – including Catherine Ashton, who lauded UNRWA summer camps in her June 20th speech.

A short film was screened “INSIDE THE UNRWA CLASSROOM,” (3) produced by The Center for Near East Policy Research, reporting from UNRWA schools located in Jerusalem, Nablus, and Gaza Dr. Groiss also presented inflammatory materials taken from the PA books and used by UNRWA, illustrating demonization of the other, non-recognition of the Jewish connection to the Land of Israel within any border, historically (Israelite period) or present-day 1948 borders, and indoctrination for the right of return, through violence and bloodshed.

Dr. Groiss emphasized that the concept presented in the PA textbooks is that the ‘Zionist entity’ has only greedy ambitions and none of the books show any fact-based historical identification of the Jews to Israel, either in the past or in the present.

According to PA history texts used by UNRWA, the characters of the Bible, including Holy Places mentioned there, are Palestinian, and only Palestinian.

In maps distributed in all UNRWA schools, there was no ‘Jewish’ Holy Temple and no Jewish connection to the Temple Mount in Jerusalem, but rather, only a ‘temple’ with no attributes of Jewish-ness…Dr. Groiss showed how all Jewish holy sites are transformed in PA texts into Islamic holy sites.

All students from UNRWA schools are taught about the “Right of Return” as the only realistic option and human right.

Dr. Groiss read from a poem taught to fifth grade UNRWA students: ‘We Shall Return,’ in which it teaches children to return “under the flag of glory, Jihad and struggle, with blood, sacrifice, fraternity and loyalty.’

Diplomats from the five nations represented at the briefing were attentive and open to Dr. Groiss’s report. They promised to bring these issues to the discussions of their respective governments..

A Norwegian representative asked Dr. Groiss to comment on the call of some Israeli politicians to annex Judea and Samaria- the West Bank.

Dr. Groiss pointed out that political positions taken in Israel have nothing to do with an UNRWA educational system that molds the minds of half a million pupils to prepare them for war to “liberate” all of Palestine.

Dr. Groiss emphasized that the donor governments must take full responsibility for what UNRWA teachers impart to their students.

The Norwegian Government, whose representatives from their consulate in Jerusalem and their embassy in Tel Aviv attended the briefing, has come under intense pressure about their unconditional funding of UNRWA and the PA activities.

In that context, the Center plans to conduct audiovisual briefings on UNRWA during the fall of 2013 in the U.S. Congress, the Parliaments of the EU, Norway, Australia, and Canada.

The Center for Near East Policy Research will now make its UNRWA videos and documentation of UNRWA indiscretions available to legislative staffers of all donor countries, in the hope that irrefutable evidence will counter any attempt to whitewash or distort the actual UNRWA educational policies.