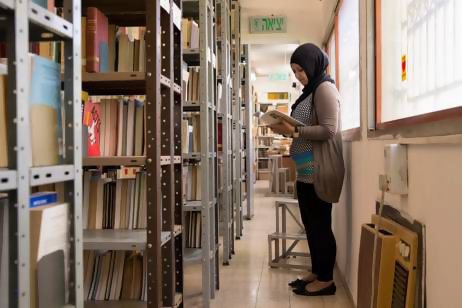 TEL AVIV // At first glance, Yiddish phrases such as “oy vey” may seem odd when uttered by Samah Jayosi, a Muslim Palestinian citizen of Israel. Yet the headscarf-wearing 24-year-old is one of several dozen Arab students at a major Israeli university learning about the Yiddish language and the culture of Eastern Europe’s Ashkenazi Jews – a rare quest even among most young Israeli Jews who view Yiddish as useless in their daily lives.

For some Arab students, delving into Yiddish may be driven by curiosity about the language or an assumption that the course could be relatively easy because Yiddish is similar to their spoken Hebrew.

For others, like Ms Jayosi, studying Yiddish is at least partly a bid to bolster coexistence between Israel’s Jewish majority and Arab minority.

“It’s important to be able to understand the other side,” she said, standing outside her Yiddish classroom at Bar-Ilan University just outside of Tel Aviv last week and clutching a Yiddish handbook over her pregnant stomach.

Like Ms Jayosi, the about 70 Israeli Arabs enrolled in courses at Bar-Ilan University’s Rena Costa Centre for Yiddish Studies account for almost a quarter of the institution’s total students this year.

Aside from their interest in Yiddish, their presence at this particular university may itself raise some eyebrows. After all, Bar-Ilan was founded in 1955 by religious Zionists, a group most closely identified with Jewish settlers in the occupied West Bank, territory the Palestinians want as part of their future state. Bar-Ilan – whose campus, unlike other Israeli universities, is filled with dozens of Israeli flags hanging from poles – is also known for perhaps its most notorious ex-student, Yigal Amir, who assassinated the former Israeli premier, Yitzhak Rabin, in 1995.

Mohamad Eissa, a 22-year-old Israeli Arab studying optometry at Bar-Ilan and enrolled in a Yiddish course, said he was concerned initially about discrimination.

“I hesitated to come to this university, but the studies are good, I have both Jewish and Arab friends and haven’t met with any racism,” he said.

Mr Eissa said he chose to study Yiddish because it was similar to German, a language he speaks after spending part of his childhood in Germany.

Khaled Swete, a 23-year-old Bedouin from a northern Israeli Arab village in his third year at Bar-Ilan, said his curiosity about Yiddish was sparked after taking an Arabic course in 2010 in which he was one of the few Arabs among mostly Jewish students.

“I wondered why they were studying my language and culture, and why shouldn’t I study theirs. After all, as Palestinians, we want to know why the Jews came here,” he said.

Mr Swete said that studying about the near-extinction of Yiddish culture during the Holocaust changed his view about past experiences such as witnessing Arab pupils in school drawing the Nazi swastika on their chairs and desks.

“They were doing it as a protest against Jews coming to their country, but after learning more about the Nazis and Jewish history in the Yiddish course, I see what they did as a mistake,” he added.

With their Yiddish skills, the Arab students are a rare breed. After all, Yiddish is now mainly being kept alive by ultra-Orthodox communities in Israel – where they account for about a tenth of the population of about 8 million – as well as in religious areas of New York City, home to many Holocaust survivors and their families.

Yiddish played a central role in the lives of Jews in Europe, originating in the 10th century in Germany’s Jewish communities and becoming widespread in Eastern Europe by the 16th century. Based on medieval German as well as Hebrew and Aramaic, Yiddish was spoken by more than 10 million Jews before the Holocaust.

Despite decades-long predictions of approaching extinction, interest in Yiddish appears to be resurgent. It is now taught in many universities worldwide, is being closely studied by historians and German language experts, and is the language of more than 100 newspapers, magazines, radio broadcasts and websites.

For some Arab students, Yiddish could be a professional boost. Vered Kopel, who teaches Yiddish at Bar-Ilan, said: “One female Arab student wanted to be a social worker and speak to elderly Holocaust survivors in Yiddish. Another Arab lawyer wanted to be able to deal with inquiries from Yiddish-speaking prospective clients.”

Ms Jayosi, who majors in Jewish literature and Arabic, said she plans to use Yiddish once she becomes a Hebrew teacher for Arab children.

“Maybe it will help them see that this language and this nation have a complicated history, and they’ll understand the other side better.”