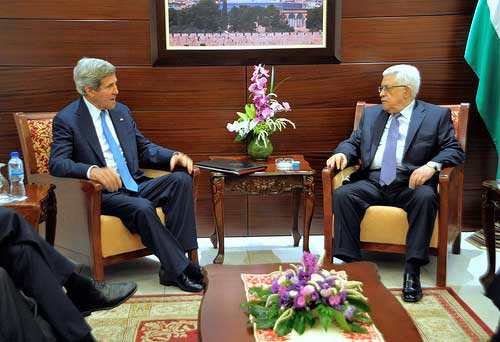 Once again a lot of people think that Secretary of State John Kerry is on the verge of making a breakthrough toward peace. The problem is that these people believe that the contenders were born yesterday, that they have no constraints whatsoever.

The Palestinian Authority (PA) has no intention of making peace. It only wants to get concessions and blame Israel for an absence of peace. It knows that the Obama Administration will never punish it if it balks but probably will only offer it more.

The PA doesn’t want to make peace since any actual concessions will make it appear to be a traitor and will bring a counter-offensive from Hamas. Since it doesn’t even represent the territory it claims-it has no power over the Gaza Strip and has no prospect of getting any-the PA cannot make any binding commitment at all. And it is watching as the battle for Syria is going on next door. That would give it a radical neighbor-the United States is supporting it-which will deem a peace agreement as null and void.

Every PA negotiator knows well that he isn’t supposed to succeed. It is only Kerry who doesn’t know this.

As for Israel, the government of Prime Minister Benjamin Netanyahu knows that it cannot depend on the United States. For example, the key issue is supposedly the precondition of what the borders will be. Now think this one through:

The PA demands and must demand that the 1967 lines would be the state borders. BUT the United States on two occasions, in the George Bush administration and in later 2010-told Israel that it could keep “settlement blocs,” that is large settlements along the borders. It is thus impossible that Netanyahu would agree to accept the loss of that U.S. commitment.

Why should he not get something for nothing, show that the president’s past commitment was worthless, and simultaneously know that any time the PA wants more that Obama will give it to them?

And of course his coalition-even his own party-won’t agree. Does Israel so desperately need “peace” that it must be purchased at its reduced security?

Meanwhile what is the United States doing for Israel on Egypt (still refusing recognizing the military regime in Egypt), Lebanon (not keeping the 2006 commitment to combat Hizballah); Syria (pushing weapons on Islamists which Israel will have to confront in future); the Gaza Strip (having no policy to bring down Hamas); Iran (no serious plan for denying nuclear weapons), and Turkey (letting Ankara ignore the supposed détente even though it was promised by Obama himself)?

And that’s not even mentioning the demand for millions of Palestinian Arabs to “return” to Israel or Jerusalem?

There is nothing for Israel in this except the promise of peace, which will evaporate as ever single Obama promise has also done.

So the point is this:

The PA will keep doing stalling tactics and come up with new preconditions that it hopes Israel will not meet.

Israel will keep giving minor concessions and engaging in stalling tactics to hope that Kerry finds something useful to do.

Kerry will keep rotating between shuttle diplomacy and his yacht until the media has tired of this game. The Ring of Kerry in Ireland is one of the most beautiful places in the world. Now the Middle East has its own.

All leaks, spins, false claims, and ploys will go nowhere.

Advice: Don’t read about the latest double-talk and impending supposed breakthroughs in the media. Look at underlying interests; not imaginative headlines.