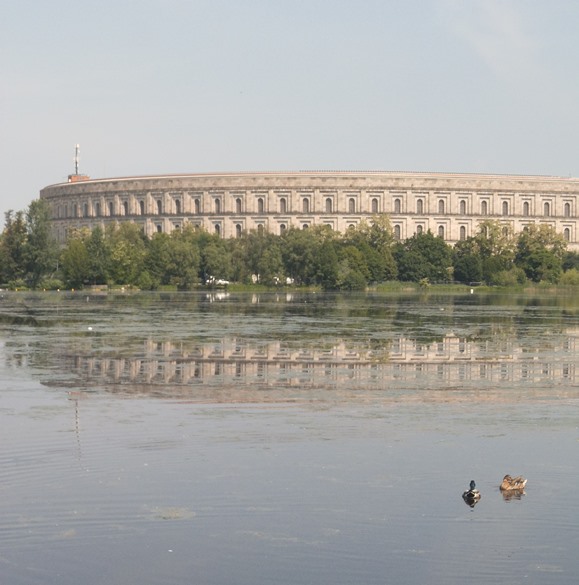 [Editor’s note: In the article below I refer to the Documentation Centre, which is a museum about the rise of Hitler, the Nazi party and the Holocaust, located on part of the Nazi Party Rally Grounds in Nuremberg, Germany.]

A sunny day, a beautiful lake, with ducks swimming in it,dotted with park benches, families playing, a couple in a boat, a bike path. A very peaceful setting. Serene.

That’s the scene that confronted me after I had just walked out of the Documentation Centre that is housed on Hitler’s Nazi Party Rally Grounds in Nuremberg in the north wing of the Kongresse Halle, a building designed to look like the Coliseum in Rome and house 50,000 Nazi supporters. There, I had just seen the infamous black and white images of ecstatic Nazi supporters hailing their Fuhrer, among other difficult and sometimes torturous images. It was a jarring transition to go from the Documentation Centre to the idyllic setting of the Dutzendteich lake and if I hadn’t been familiar with the history of the place, the setting would have been postcard perfect.

As I walked out of the northern wing of the Kongress Halle, a testament to Hitler’s megalomania, I saw a big sign that seemed to me at first to be an advertisement for the Nuremberg Symphony, and I thought it was a rather strange place to advertise the symphony. Then, as I got closer to the sign I realized that it wasn’t an advertisement, but that the Nuremberg symphony was actually housed there in the southern part of the Kongress Halle in the Nazi Party Rally Grounds.

My immediate thought was why would you use a building on the Nazi Party Rally Grounds to house a symphony of all things? How many survivors or their descendents of the Holocaust or Jews in general would enjoy hearing the symphony on the same grounds that Hitler built as Nazi Party Rally Grounds? Probably not too many (but then I remembered that this wouldn’t matter since there are very few Jews who live in Nuremberg and thus it’s not too likely that there are many Jews who will be going to hear the Nuremberg symphony).

Seeing the symphony sign made me begin thinking more about why the Nuremberg municipality wouldn’t leave the whole of the Nazi Party Rally Grounds as a museum. As I walked on and began to see how huge the whole complex was, which could hold 700,000 Nazi supporters, I started to comprehend how from the point of view of the municipality, not using it as anything would be seen as a large waste of resources. Notwithstanding that, somehow in my view the idea of having musical celebrations on the Nazi Party Rally Grounds didn’t seem to quite fit with preserving the historical record. Why not let it be a place for quiet contemplation, as opposed to a symphony?

From the Kongress Halle I began walking down the Great Road (Grosse Strasse) which was built from the Marzfeld (March field) to the Kongress Halle, a road that stretched as far as the eye could see- 2000 meters long, 80 meters wide, with 60,000 granite slabs, quarried by forced labor (no doubt Jewish forced labour) at various concentration camps. The Marzfeld was designed to be a giant military Nazi parade ground, the dimensions of which were 955 x 610 meters (1,061 x 677 yards) — in other words bigger than 80 football fields. The Marzfeld had 11 of 24 massive 130-foot tall towers that were built during the Nazi period, and one would have thought that these would have been preserved. But instead, they were blown up in 1967 by the city of Nuremberg so that the land could be developed for a new suburb! It wasn’t until 1973 that the monuments on the Nazi Party Rally Grounds were declared “protected’ by the City of Nuremberg, which began to maintain them as such. Today, there are people who walk and bike and rollerblade along the Great Road.

On both sides of The Great Road, which points directly to the famous medieval castle in Nuremberg’s Old City, there were stands built for spectators. I now realize (after researching on the internet) that I walked by the remains of some of those stands, but there was no sign marking them such that I wasn’t exactly sure what they were at the time. Since 1968, the Great Road area has served as a car park during major events, and on the day I was there were some vehicles parked there.

Not far from the Kongresse Halle, on the Great Road, I saw a big sign for the Nuremberg Folk Festival, and yet again I had an uneasy feeling. How many Jews would like to go to a folk festival on Nazi Party Rally Grounds on a place built by forced labour at concentration camps ? No doubt if Nuremberg had a larger Jewish population some of them might have complained about the use of this space for music celebrations, but then again, as my Czech guide George had said,“Why would Jews want to live here ?”

The area where the Nuremberg Folk Festival is now held, opposite the Kongress Halle, was planned to be the Kulturhalle, which was mapped out to be used by Hitler for his speeches on cultural matters. It never went past the planning stage.

As I walked and walked down the Great Road, I noticed there was a long stretch where there wasn’t any signage showing what the Road had been in Nazi days. I began to understand why the young man at my hotel who had lived in Nuremberg for two years didn’t know what I was talking about when I said I was going to the Nazi Party Rally Grounds. It’s very possible he in fact has been to them, but he didn’t realize it-to him it would be the place where the Nuremberg Folk Festival is, or a park. Unless he were to go to the Documentation Centre, it would be possible to be pretty unaware of what the place is.

Even though I was walking nearby I missed seeing the Silbersee (Silver Lake). At Hitler’s behest, in 1934, Albert Speer, Hilter’s chief architect who designed the whole of the Nazi Party Rally Grounds had planned what is now the lake to be The Great Stadium for the Nazis. The Stadium, meant to be the largest in the world with a capacity of 400,000 people, was excavated, but work went no further. During the war, the hole filled with groundwater creating what is now the now lake. (As an aside, Speer, who in addition to designing the Nazi Party Rally Grounds was German Minister of Armaments and War Production for part of the war was later tried at the Nuremberg trials and sentenced to 20 years in prison for his role in the Nazi regime.)

As I left the Nazi Part Rally Grounds, I kept on thinking of a video clip I saw at the Documentation Centre of two older German ladies having tea. One, who was from Nuremberg, but worked outside of the city was describing how she loved to return to Nuremberg for the weekends so that she could go and see Hitler. She proudly asserted that she had managed to see him 13 times. What was disturbing about the contemporary video is that she didn’t seem to have any regrets about those days, but rather seemed to enjoy revelling in the memory of those years.