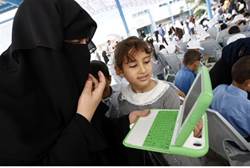 The film is made up almost exclusively of interviews with children and instructors at UNRWA camps.

In one part, campers are encouraged to chant:

“With God’s help and our own strength we will wage war. And with education and jihad we will return!”

At another point, a camp instructor brands Jews as “wolves.”

The camps are mainly financed by the U.S. and other western countries including the UK, Canada and the EU, and the documentary raises serious questions about how and why western funds are being used to inculcate Arab children with a virulently militant brand of antisemitism.

“Camp Jihad” was produced by the Nahum Bedein Center for Near East Policy Research.