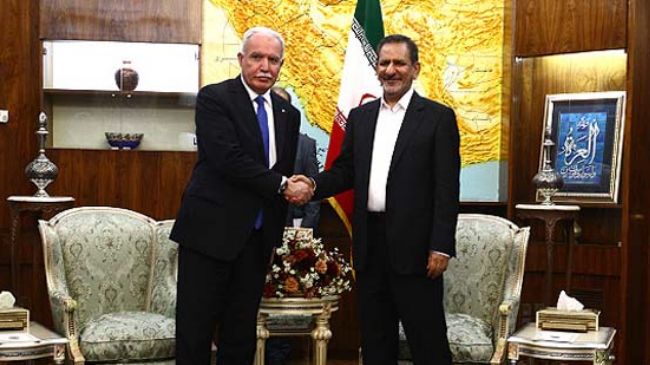 Al-Maliki handed over the PA chief’s written message to Iran’s First Vice President Es’haq Jahangiri during a meeting in Tehran on Monday.

Jahangiri said Palestine has been an important issue for Iran over the past 34 years and expressed hope that the Palestinian people would restore their rights through their wise resistance.

The PA foreign minister, for his part, expressed hope that Iran and Palestine would witness considerable increasing cooperation during the Iranian president’s tenure to serve the interests of two people and Muslim nations.

Al-Maliki said the Palestinian people are optimistic about Rohani’s tenure.

On Sunday, President Rohani took the oath of office in Majlis one day after being endorsed by Leader of the Islamic Revolution Ayatollah Seyyed Ali Khamenei.

Rohani, whose four-year tenure officially started on Sunday, takes over from Mahmoud Ahmadinejad.

Rohani won Iran’s June 14 presidential election with 50.7 percent of a total of over 36 million ballots. The voter turnout in the election was 72.7 percent.