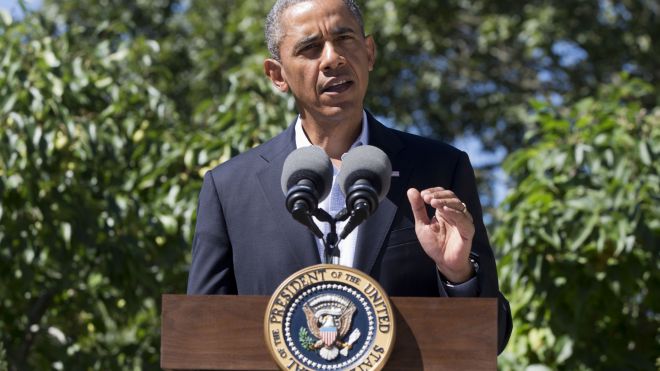 On June 4, 2009, President Barack Obama made his historic “New Beginning” speech in Cairo, boldly seeking to harken a new day for the U.S. and the Muslim world. But all the high hopes and expectations have been swept aside by the roiling events in the Middle East.

While the President and his team cannot be blamed for every unforeseen twist and turn in the region, the failure to articulate and back up a clear moral vision has damaged America’s influence among allies and foes.

First was President Obama’s failure to speak out in solidarity with the people of Iran when they heroically took to the streets protesting the gerrymandered re-election of Mahmoud Ahmadinejad. Obama’s silence was duly noted by the Ayatollahs and helped drive devastated protesters back into desperate silence.

Then there is Syria. The U.S. cannot be blamed for Bashir Assad’s butchery, but today we are left with a horrific choice between acquiescing to his thuggery or empowering Al Qaeda terrorists. Many are left with a deep sense of unease over the gnawing question: How many lives would have been saved, how many refugees would have stayed put, how would the landscape look today, if the President had dispatched NATO to impose a no-fly zone before the Islamists filled the void?

As events in the Middle East and beyond continue to spiral out of control, we are witness to an unprecedented erosion of U.S. clout.

Now, regarding Egypt, we are caught between a rock and a hard place. Despite many signals to the contrary, the administration willed itself to believe that the Muslim Brotherhood — the mother ship of Islamist extremism — having won power through democratic process would embrace democratic principles. Hence, the virtual moral free pass provided by the U.S. for Morsi’s administration, during which Coptic Christians lived in fear for their safety, rights, and churches, and tens of millions of people who do not think or pray like the Brotherhood watched in dread as their Tahrir Square revolution was co-opted by religious fanatics. Now after the military takeover, our lack of clarity and courage has all sides in the Arab world’s largest nation furious at America.

And now the absence of moral backbone is undermining support among the U.S.’s only reliable ally, democratic Israel.

In the past few days, Israel was forced by the U.S. to release 26 Palestinian terrorists convicted of murdering innocent Israelis — Jews and Arabs, from babies to grandmothers.

Instead of confirming that the release of these reprehensible individuals was an unfortunate, but necessary measure to jump-start “the peace process,” State Department spokeswoman Marie Harf refused to even identify them as terrorists:

Her mealymouthed dodge added more salt to the wounds of bereaved relatives of the victims, and must have brought a satisfied smile to the leadership of the Palestinians. What a gift the United States is delivering: 126 living ‘heroes’ along with the remains of dead ‘martyrs,’ a move that threatens to blow open a hole between Washington and Jerusalem. Large enough to drive a suicide bomber through.

As for the released Palestinians, since the State Department won’t say, here is a partial list of the first 26 released and some of their crimes. Murderers or freedom fighters? You decide.

• Hosni and Mohemed Sawalha: December 1990, stabbed to death Baruch Heisler on a bus and injured three other passengers.

• Salameh Musleh: May 1991, he and accomplice beat to death Reuven David in Petach Tikva.

• Yusef Abed al-Al: 1993, took part in the murder of Ian Feinberg in the Gaza Strip; murdered a Palestinian who was suspected of collaboration with Israel.

• Ala Eddin Abu Sitteh: December 31, 1993, he took part in the murder and desecrating the bodies of Haim Weizman and David Dadi.

Forcing Jerusalem to release terrorists without Secretary of State John Kerry demanding anything from the Palestinians in return is difficult enough to swallow for Israelis. Watching the spokesperson for the United States government declare that we are agnostic about whether they are “freedom fighters” is an outrage.

The only way forward for this great nation is to ground our foreign policy in reality, not wishful thinking. As events in the Middle East and beyond continue to spiral out of control, we are witness to an unprecedented erosion of U.S. clout. Tossing out our moral compass won’t help. It will only succeed in further empowering those who sneer at our values and seek America’s demise.