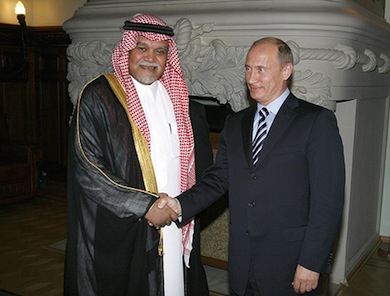 Talk about a cry for help. The Saudis have apparently judged President Obama to be rudderless in his Middle East policies, judging by their recent diplomatic moves toward Russia: They appear to have plied Putin with a deal to collude in the global oil market, while also urging him to distance himself from Syria’s Butcher Assad.

Rumors that Prince Bandar of Saudi Arabia had met with Putin in July have been swirling about for weeks, but the Kremlin has now acknowledged that the meeting did in fact take place. Details of what was exactly discussed have been sparse so far, but now Lebanese newspaper As-Safirreports on specifics:

[Prince] Bandar [bin Sultan al-Saud] discussed the potential cooperation between the two countries if an understanding could be reached on a number of issues, especially Syria. He discussed at length the matter of oil and investment cooperation, saying, “Let us examine how to put together a unified Russian-Saudi strategy on the subject of oil. The aim is to agree on the price of oil and production quantities that keep the price stable in global oil markets…. We understand Russia’s great interest in the oil and gas present in the Mediterranean Sea from Israel to Cyprus through Lebanon and Syria. And we understand the importance of the Russian gas pipeline to Europe. We are not interested in competing with that. We can cooperate in this area as well as in the areas of establishing refineries and petrochemical industries. The kingdom can provide large multi-billion-dollar investments in various fields in the Russian market. What’s important is to conclude political understandings on a number of issues, particularly Syria and Iran….

The key to the relations between our two countries starts by understanding our approach to the Syrian issue. So you have to stop giving [the Syrian regime] political support, especially at the UN Security Council, as well as military and economic support. And we guarantee you that Russia’s interests in Syria and on the Mediterranean coast will not be affected one bit. In the future, Syria will be ruled by a moderate and democratic regime that will be directly sponsored by us and that will have an interest in understanding Russia’s interests and role in the region.”

This is jaw-dropping stuff, to say the least. Nothing was signed in this closed-door meeting between Putin and Bandar-Putin requested time for both countries to look into the specifics of such a deal. But the mere fact that our allies felt like they needed to go this route signals that something is seriously awry in President Obama’s Middle East approach.