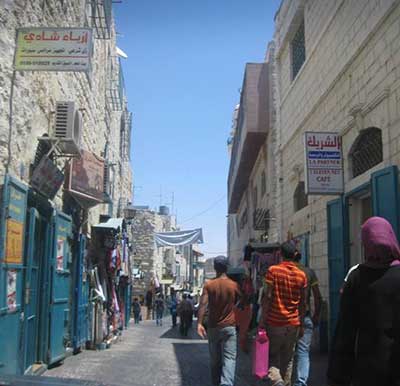 I spent a day in Bethlehem in the Palestinian territories in January this past winter with a Palestinian driver who defined himself as a “a Muslim Arab who came from a Christian family which used to be Jewish.”

He looked me in the eye, while he was smoking a cigarette and repeated, “You see I am Muslim, who is also a Christian and a Jew.”

I’ve heard many lines before, but this one was definitely memorable. I made a mental note to jot it down, as I opened the window on my side of the car to let out the smoke.

“My grandparents were Christian,” he continued, but explained that his parents converted to Islam. “My family is from Jerusalem for many generations. We must have been Jewish before we were Christian.”

Being not only a Muslim, but also a Christian and a Jew, he was thus able “to see the conflict from all sides,” he told me.

Although he complained about Israel, he did say that “Israel isn’t as bad to the Palestinians as the Arab States are. They [the Arab States] are the worst. They do nothing for us. They promise aid and then they never follow through and send it.”

I asked him about corruption in the Palestinian Authority [PA].

He answered with a chuckle “There is no PA corruption. Not anymore.”

“Why is that?” I inquired

“Because the PA doesn’t have any money right now. They are broke,” he laughed. “They can’t pay salaries because the Arab states haven’t fulfilled their pledges.”

He told me that in addition to giving tours, he was also a journalist for a Japanese television station (and I began wondering if it would be correct to say he was a Japanese Muslim, Christian, Jewish journalist and if he would try that line on me?).

“Ah, then we will need to take you to a gift shop before you go to the Church,” he said.

When I asked why that was necessary, he explained that, of course, I would want to buy my gifts and take them “to be blessed” in the Church, as opposed to buying them after my church visit and not having the gifts blessed.

I hadn’t counted on this line of reasoning and before I knew it he had pulled up in front of a store (where I assumed he got a percentage for bringing foreign customers, ones who were stupid enough to believe he was a Muslim, Christian and Jewish Japanese journalist).

There was no point telling him that I wasn’t interested in making purchases or getting my gifts blessed since I wasn’t Christian anyways, and then getting into a potential argument. He was the one who was behind the wheel and by then we were in “PA land”, out of Israeli jurisdiction. I started mentally calculating how much I was prepared to spend in order to get in and out of “blessed” Bethlehem without any problems.

When I got inside the gift shop, I was, unfortunately, the only one in there. I say unfortunately, since this now meant that the store owner could spend his undivided attention trying to sell me something. There wasn’t anything I really needed.

I was looking at an Arabic style tea set, a small one that kids could play with.

The owner pulled out a tea set trying to convince me that I had to buy the one he deemed to be the most beautiful. When I asked how much it was, he said $ 2000.00 U.S.

After a fair bit of back and forth haggling I told him he was way out of my price range. I did end up buying a mini tea set for $32.00 U.S. (it should have been a third the price, but I had no desire to bargain further with him). Besides, I had to leave enough time to get to the Church of Nativity and get the tea set blessed!

I went to look for my guide so we could get to the Church of Nativity.

Alas, the owner told me that my guide (unannounced to me) had to go on an errand and would be back in about 20 minutes. I knew this trick–It was designed to make me wait further in the store so that I’d be pressured into buying something else. My guide no doubt would get a “tip” for my extra purchase.

The owner brought out some tea and offered me some with nana (from my experience usually tea is served, before the final strong sales pitch). The owner spent the next twenty minutes trying to convince me to buy a more expensive tea set, and telling me how bad business was, while reminding me that there was no tax on any of his merchandise since Bethlehem was a “tax free zone” as it was a holy Christian city.

I managed to get out of the store after having spent another $12.00 U.S. on dove shaped mother of pearl earrings for my daughter (which she says she doesn’t like). I imagine she’d have preferred the $2000.00 tea set.

My visit to the Church was no- eventful except for the fact that I had forgotten that you have to bend down and practically crawl to get into the entrance, which my guide explained was made low in order to prevent people from riding in on their horses. He gave me a painstakingly thorough explanation of every detail of the Church, as I tried to speed things up since I was more interested in getting a chance to walk through town.

Finally, I had a chance to stroll through the market, enough to see how overpriced the tea sets in my friend’s store were, and to notice the items being sold with maps of “Palestine” that also included all the territory that is Israel.

WhiIe inside one shop, I asked a young twenty-something shopkeeper what he thought of PA President Mahmoud Abbas.

Then suddenly he raised his voice and said, “But I hate Abbas. He’s corrupt.”

Then he pulled out a scarf from one of the shelves and gave it to me as a gift.

“Why are you giving me a gift?” I asked.

He smiled, “Because you asked me what I thought of Abbas. And I am not afraid to say the truth anymore. He’s corrupt.”

“I am giving you a scarf to thank you for asking me what I think.”

It was an unforgettable moment.

It was only later that day that I realized that while I had been haggling over tea sets in Bethlehem, there was a rather interesting political development that occurred in Bethlehem that day. Bethlehem’s PA governor, Abdel Fattah Hamayel, issued an order banning Palestinian institutions in his district from having any direct contact with Israel.

The order applied to all municipal and village councils in the Bethlehem area, as well as Palestinian NGO’s and trade institutions.

As Khaled Abu Toameh wrote in the Jerusalem Post that day, this was not the first time that the PA has prevented Palestinians from holding meetings or dealing directly with Israelis.

“In recent years, Palestinians who participated in conferences and other activities with Israelis have been denounced by PA-affiliated organizations and Fatah for “promoting normalization” with Israel.”

Of course, as I thought at the time, a Fatah party that was seriously interested in returning to the negotiating table with Israel would not have been waging an anti-normalization campaign. The two are incongruent.

It’s a point to remember now that U.S. Secretary of State Jon Kerry has managed to get the PA meeting with Israel. By waging an anti-normalization campaign as it has, Fatah has certainly not prepared the Palestinian street for any potential deal–in fact, quite the opposite.