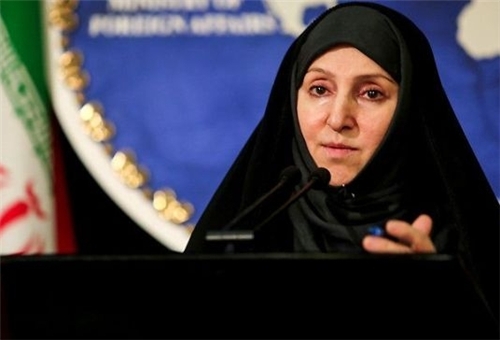 TEHRAN (FNA)- The Iranian Foreign Ministry on Tuesday called invalid a press release by the White House alleged to be the text of the nuclear agreement struck by Iran and the Group 5+1 (the US, Russia, China, Britain and France plus Germany) in Geneva on Sunday.

“What has been released by the website of the White House as a fact sheet is a one-sided interpretation of the agreed text in Geneva and some of the explanations and words in the sheet contradict the text of the Joint Plan of Action (the title of the Iran-powers deal), and this fact sheet has unfortunately been translated and released in the name of the Geneva agreement by certain media, which is not true,” Foreign Ministry Spokeswoman Marziyeh Afkham said on Tuesday.

She said that the four-page text under the name of the Joint Plan of Action (which has been released by the Iranian foreign ministry) was the result of the agreement reached during the Geneva talks and all of its sentences and words were chosen based on the considerations of all parties to the talks. In fact one of the reasons why negotiations between Iran and the G5+1 took so long pertained to the accuracy which was needed for choosing the words for the text of the agreement, Afkham said, explaining that the Iranian delegation was much rigid and laid much emphasis on the need for this accuracy.

Afkham said that the text of the Joint Plan of Action was provided to the media a few hours after the two sides agreed on it.

After the White House released a modified version of the deal struck by Iran and the six world powers in Geneva early Sunday morning, the Iranian Foreign Ministry released the text of the agreement.

The full text of the deal is as follows:

There would be additional steps in between the initial measures and the final step, including, among other things, addressing the UN Security Council resolutions, with a view toward bringing to a satisfactory conclusion the UN Security Council’s consideration of this matter. The E3+3 and Iran will be responsible for conclusion and implementation of mutual near-term measures and the comprehensive solution in good faith. A Joint Commission of E3/EU+3 and Iran will be established to monitor the implementation of the near-term measures and address issues that may arise, with the IAEA responsible for verification of nuclear-related measures. The Joint Commission will work with the IAEA to facilitate resolution of past and present issues of concern.

Elements of a first step The first step would be time-bound, with a duration of 6 months, and renewable by mutual consent, during which all parties will work to maintain a constructive atmosphere for negotiations in good faith. Iran would undertake the following voluntary measures:

• From the existing uranium enriched to 20%, retain half as working stock of 20% oxide for fabrication of fuel for the TRR. Dilute the remaining 20% UF6 to no more than 5%. No reconversion line.

• Iran announces that it will not enrich uranium over 5% for the duration of the 6 months.

• Iran announces that it will not make any further advances of its activities at the Natanz Fuel Enrichment Plant1, Fordow2, or the Arak reactor3, designated by the IAEA as IR-40.

• No new locations for the enrichment.

• Iran will continue its safeguarded R&D practices, including its current enrichment R&D practices, which are not designed for accumulation of the enriched uranium.

o Submission of an updated DIQ for the reactor at Arak, designated by the IAEA as the IR-40, to the IAEA.

o Steps to agree with the IAEA on conclusion of the Safeguards Approach for the reactor at Arak, designated by the IAEA as the IR-40.

1 Namely, during the 6 months, Iran will not feed UF6 into the centrifuges installed but not enriching uranium. Not install additional centrifuges. Iran announces that during the first 6 months, it will replace existing centrifuges with centrifuges of the same type.

2 At Fordow, no further enrichment over 5% at 4 cascades now enriching uranium, and not increase enrichment capacity. Not

feed UF6 into the other 12 cascades, which would remain in a non-operative state. No interconnections between cascades.

Iran announces that during the first 6 months, it will replace existing centrifuges with centrifuges of the same type.

3 Iran announces on concerns related to the construction of the reactor at Arak that for 6 months it will not commission the reactor or transfer fuel or heavy water to the reactor site and will not test additional fuel or produce more fuel for the reactor or install remaining components.

4 Consistent with its plans, Iran’s centrifuge production during the 6 months will be dedicated to replace damaged machines.

In return, the E3/EU+3 would undertake the following voluntary measures:

• Suspend U.S. and EU sanctions on:

• The U.S. Administration, acting consistent with the respective roles of the President and the

o This channel could also enable:

transactions required to pay Iran’s UN obligations; and, direct tuition payments to universities and colleges for Iranian students studying abroad, up to an agreed amount for the six month period.

• Increase the EU authorisation thresholds for transactions for non-sanctioned trade to an agreed amount.

5 “Sanctions on associated services” means any service, such as insurance, transportation, or financial, subject to the underlying U.S. or EU sanctions applicable, insofar as each service is related to the underlying sanction and required to facilitate the desired transactions. These services could involve any non-designated Iranian entities.

6 Sanctions relief could involve any non-designated Iranian airlines as well as Iran Air.

Elements of the final step of a comprehensive solution*

The final step of a comprehensive solution, which the parties aim to conclude negotiating and commence implementing no more than one year after the adoption of this document, would:

• Have a specified long-term duration to be agreed upon.

• Reflect the rights and obligations of parties to the NPT and IAEA Safeguards Agreements.

• Comprehensively lift UN Security Council, multilateral and national nuclear-related sanctions, including steps on access in areas of trade, technology, finance, and energy, on a schedule to be agreed upon.

• Involve a mutually defined enrichment programme with mutually agreed parameters consistent with practical needs, with agreed limits on scope and level of enrichment activities, capacity, where it is carried out, and stocks of enriched uranium, for a period to be agreed upon.

• Fully resolve concerns related to the reactor at Arak, designated by the IAEA as the IR-40.

• Fully implement the agreed transparency measures and enhanced monitoring. Ratify and implement the Additional Protocol, consistent with the respective roles of the President and the Majlis (Iranian parliament).

• Include international civil nuclear cooperation, including among others, on acquiring modern light water power and research reactors and associated equipment, and the supply of modern nuclear fuel as well as agreed R&D practices.

Following successful implementation of the final step of the comprehensive solution for its full duration, the Iranian nuclear programme will be treated in the same manner as that of any non-nuclear weapon state party to the NPT.

* With respect to the final step and any steps in between, the standard principle that “nothing is agreed until everything is agreed” applies.