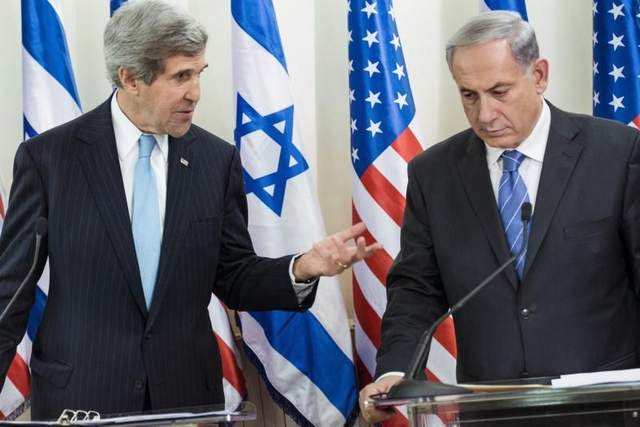 GIDRON OUTPOST, SARTABA RIDGE, JORDAN VALLEY – As US Secretary of State John Kerry finalizes proposals for an Israeli-Palestinian peace deal, rifts remain as vast as this strategic valley west of the Jordan River that much of the international community wants Israel to give up.

After months of shuttle diplomacy by Kerry and thousands of hours of strategic dialogue led by retired US Marine Corps Gen. John Allen, Israeli leaders are as resistant as ever to trading this more than 80 kilometer-long, up to 7 kilometer-deep stretch of territory for technology, US security assurances and joint force patrols.

Experts here insist Kerry and Allen have not yet submitted a final version of the US security plan, but that earlier proposals prescribing a long-term, technology-enabled, joint force presence fall short of Israel’s fundamental right to defensible borders.

“There’s no way to provide security by way of foreign forces or any combination of advanced technology. If there is a crisis, history has shown us that foreign forces are the first to vanish…. Satellites, drones and all the other goodies cannot compensate for IDF [Israel Defence Forces] control of the ground and airspace of this vital sector,” said retired Maj. Gen. Uzi Dayan, a former national security adviser who commanded the theater that includes the Jordan Valley.

Dayan said relinquishment of this former Jordanian territory seized in the 1967 Six Day War “is a sure recipe for another war.”

He added, “We don’t know what will be in Iraq or Syria, and we worry very much about what might happen in Jordan. So we must maintain this minimal strategic depth to combat external threats and terror if we don’t want this place to become another South Lebanon or Gaza.”

Revised US security proposals more amenable to Israeli concerns were not evident in Kerry’s meeting with Israeli Prime Minister Benjamin Netanyahu last week in Davos, Switzerland, sources here said. It is unclear, they added, whether US Defense Secretary Chuck Hagel would have anything new to offer Israeli Defense Minister Moshe Ya’alon when the two meet at a NATO conference in Munich at the end of the month.

Few details have leaked from ongoing strategic consultations. However, experts here say the plan calls for international peacekeeping forces along the Jordanian side of the border and a long-term, but finite Israeli presence – devoid of civilian settlers – in just part of the territory that parties to an agreement would recognize as the eventual eastern border of sovereign Palestine.

“We understand that we can’t dictate to Israel what it needs for its security,” US President Barack Obama told a gathering of the Saban Center in Washington last month. Still, Obama said security consultations led by Allen have determined that technology and “additional ideas” – including what he termed “a transition period” – could answer Israel’s concerns.

While the Israelis must make that determination, Obama said Allen has concluded “that it is possible to create a two-state solution that preserves Israel’s core security needs.”

Kerry estimated that 160 US security experts – including dozens from the Office of the Secretary of Defense, the Defense Security Cooperation Agency, the Defense Advanced Research Projects Agency, the Joint Staff and all service branches – are working with Allen to ensure that “what we put on the table is deadly serious, real, because the stakes are real.”

Speaking at the same Saban Center event, Kerry said the eventual US security plan would be “state of the art” and would ensure “that the border on the Jordan River will be as strong as any in the world, so that there will be no question about the security of the citizens – Israelis and Palestinians – living to the west.”

But the closer Washington comes to the moment of truth when both parties must either accept or reject US framework proposals, the more strident Israeli rallying calls become against the Kerry-led US peace drive.

Economic Minister Naftali Bennett, head of Israel’s third largest voting bloc that is ideologically opposed to a Palestinian state, is openly colluding with the hardest-line members of Netanyahu’s Likud Party to torpedo the Kerry-led process.

And if that weren’t enough, Likud lawmakers are pushing to annex the Jordan Valley – an act that most experts say would not be recognized by international law, but would sabotage peace prospects for a generation or more.

Even Ya’alon, who has cultivated close personal ties with Hagel, his Pentagon counterpart, has been unable to mask contempt for Kerry-led efforts to reach peace with what he views as an unwilling and unworthy partner.

Ya’alon was forced to apologize for a harsh, ad hominem attack published in Jan. 12 editions of Yediot Ahronot, Israel’s leading daily newspaper, assailing Kerry’s “inexplicably obsessive” and “messianic” pursuit of a peace plan that was “not worth the paper it is printed on.”

While Ya’alon regretted his offensive tone, sources say the straight-talking Kibbutznik stands by the substance of his remarks.

“Sensors and drones are no substitute for the physical presence of Israel Defense Forces soldiers. The Jordan Valley is vital to the security of Israel, and we cannot assent to third parties being there in our stead,” the former IDF chief of staff said Jan. 16 in Jerusalem.

As for Netanyahu, the Israeli prime minister remains ostensibly invested in US-led diplomacy but is increasingly dubious that the process will result in an end to Palestinian claims and recognition of Israel’s permanent right to exist as a Jewish state. He has repeatedly insisted that Israeli security “cannot be outsourced” to foreign forces – “even those of our closest friend and ally” – and that Israeli presence in the Jordan Valley is paramount to its right to defensible borders.

At a Jan. 16 Jerusalem gathering of foreign press following a meeting that day with Jordan’s King Abdullah II, Netanyahu said both countries agree that any prospective Palestinian peace deal must ensure security along their shared border. Any agreement with the Palestinians must address not only the Jordan River perimeter, “but also what happens inside the perimeter,” Netanyahu said.

“These are obviously very important questions, because if we don’t address them properly,… we’ll have neither peace nor security,” he said.

At an altitude of 1,200 meters, this Israeli early warning post is one of a dozen surveillance stations holding the high ground for a brigade-sized force in the valley below, which slopes down to the lowest point on Earth at the Dead Sea. Forces in the valley have only five passages through which to maneuver when combating threats beyond the frontier.

Prior to Israel’s 1994 peace treaty with Jordan, the high-powered antennae and electro-optics at this and other ridge-top posts provided tripwire alerts of conventional attack from the east. But in the last 20 years, they are aimed primarily in the opposite direction in Israel’s fight against West Bank fighters.

While Israel views the valley as its first line of defense against regional regime changes that could reignite the dormant Eastern Front, Palestinians see it as a quarter of the Israeli-occupied West Bank that must anchor their future state. The area is home to some 57,000 Palestinians, about 6,000 of whom live and work among the 7,000 Israelis residing in 21 communities comprising the Jordan Valley Regional Council.

In a recent interview, Council Mayor David Elhaiini conceded that the Palestinians deserve a state but not one that includes the Jordan Valley. Nevertheless, “If the government decides that we should leave, we will go. This is a democratic country,” he told Defense News.

Some retired IDF generals and security experts have come out in recent weeks in support of exchanging boots on the ground for technological presence. Standoff, network-integrated sensors and shooters, some say, may offer an acceptable solution to strategic depth, which in any case is countered by the rocket and missile threat.

“I have no problem with the political demand that the Jordan Valley should remain part of Israel,” retired Maj. Gen. Meir Dagan, a former Mossad chief, told community activists this month. “What bothers me is that it is presented as some sort of security problem.”

But the professional assessment of the IDF General Staff and most experts here is that the IDF must maintain three armored battalions, at least two ridge-top intelligence posts and a presence in the passages for as long as it takes to ensure that the future Palestinian state – like Jordan – is committed to controlling its territory.

“If we want to have an effective presence that allows us to combat terror, smuggling and external threats, the minimum depth is from the river until Route 90, an average of 5 kilometers along the entire frontier,” retired Maj. Gen. Giora Eiland said of the main road connecting the Galilee Sea in the north to the Dead Sea in the south.

But Eiland said it’s not enough for the IDF to control the road; it would have to retain ridge-top posts overlooking the road. “Otherwise, the forces can’t maneuver and the area becomes a trap…. All told, we’re talking a minimum of 400 square kilometers. That’s the equivalent of 7.5 percent of the West Bank, and there’s very little chance the Palestinians will agree to our continuous, contiguous presence in such a large area for such a long time.”