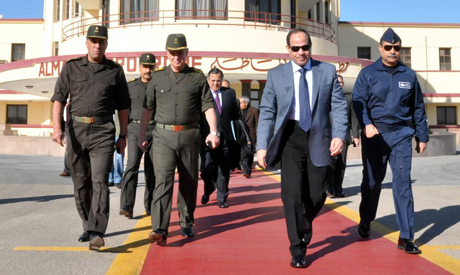 El-Sisi is accompanied by Foreign Minister Nabil Fahmy in a visit that is a “response to the historic visit of their Russian counterparts to Egypt last November.”

They will discuss cooperation between the two countries with Russian ministers, Ali said on his official Facebook page.

Military sources, speaking on condition of anonymity, told Al-Ahram Arabic news website on Wednesday that El-Sisi was visiting Moscow to finalise a deal on the purchase of weapons.

Egypt sees Russia as a new potential ally after the US suspended part of its annual military aid to Egypt.

In November, talks between El-Sisi and Russian Defence Minister Sergei Shoygu resulted in a weapons deal.

AFP reported at the time that Moscow had signed a deal to provide Egypt with air defence missile systems.

The US Congress recently passed a new bill restoring more than $1.5 billion in military and economic aid to Egypt, which had been largely cut off amid concerns over the country’s democratic transition and mounting violence following the ouster of Islamist leader Mohamed Morsi.

The change of heart towards Egypt comes after a constitution referendum that some say has set Egypt closer to a democratic path.