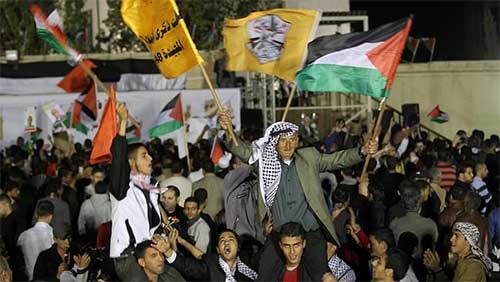 IF most Palestinians thought like most Israelis, peace would come to their lands.

If most Israelis thought like so many Palestinians – from its leader Mahmoud Abbas down to the shiftless youths seeking to meet Allah via Semtex and Jewish blood – there would be many fewer than the 4.3 million of them.

The tolerance of Israel, as its neighbours bait it, bomb it and demand its destruction, surprises me. Three rockets were fired from Gaza in to southern Israel as I wrote this piece.

The United Nations – a corrupted farce that entertains the destructiveness of Arab self-loathing as if it had the gravitas of fully formed democracy – often condemns Israel.

A wry smile at such absurdities should be allowed. But recent events prove that Israel seeks peace and the Palestinian leadership does not.

To make progress with talks to find a solution to the region’s problems that I am not sure the Palestinians even want, Israel has been releasing from its jails some of the Middle East’s worst killers.

A third tranche walked free on New Year’s Eve; a fourth will do so soon.

It’s a brave decision orchestrated by Israeli Prime Minister Benjamin Netanyahu who is usually portrayed as a hawk. And it has excited much opposition from the people who elected him: perhaps up to 70 per cent of Israelis disagree that Palestinian terrorists should be released early from jail.

At least in jail, they can’t kill more innocents.

Rest assured, now that they have been freed and welcomed home as heroes, they will kill again.

Among the murderers released so far have been Yacub Ramaddan, Muhammad Mahmoud and Afana Muhammad who slashed the throat of mother of seven Sara Sharon and left a note on her body that read “We will continue killing Jews… ”.

Also freed have been Muammar Mahmoud and Salah Ibrahim who stabbed to death an acclaimed history professor, the elderly Menahem Stern, as he walked to the library of his university.

Not long before Stern’s murder, another young Palestinian grabbed the wheel of a bus travelling between Tel Aviv and Jerusalem and forced it off a cliff.

It caught fire and passengers were burned alive. Sixteen were killed.

That was Abed Ghaneim’s handiwork. He’s been freed, too.

But what should deeply concern us is that these barbarians are feted at home as living saints.

Take Issa Abd Rabbo. When he was released recently, he was welcomed home personally by the Palestinian president, Mahmoud Abbas, who raised Rabbo’s hand in victory and referred to the double killer as a hero.

He calls men like Rabbo “the best of the Palestinian people”.

The murderer was interviewed on television the other day. I’ll let him describe what happened:

“There was supposed to be a military operation shooting at a bus transporting Israeli soldiers… I was surprised when on my way to the area, I waited, waited and waited and the bus didn’t come.

“I was forced to carry out an operation on my own, an improvisation, I took it upon myself.

“An Israeli car approached, with two in it. I said, here’s a chance and I don’t want to return empty-handed. They left the car… and sat down under a pine tree.

“I told him: ‘You are not allowed here. This is our land and our country. You stole it and occupied our land and I’m going to act against you.’ They were surprised by what I told them. I tied them up, of course, and then sentenced them to death by shooting, in the name of the revolution.

“I shot them, one bullet each, and went [hiding] in the mountains… I went to my aunt and told her: ‘We have avenged Muhammad’s blood.’

The bloodlust of these insane young Arab men and the manner in which their leaders promote the carnage against their neighbours is endlessly depressing.

Less than 200km north of the site of Rabbo’s grotesque act of terror lies a hill just west of the Sea of Galilee.

Long ago a modest young man ascended it and spoke to a group of people he had impressed with his ideas of peace and goodwill towards others.

“Blessed are the peacemakers,” he famously uttered.

I guess you know who he was talking about.