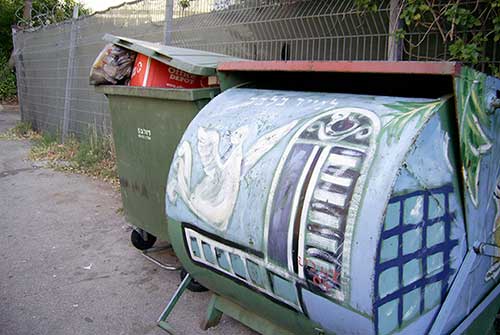 A few weeks ago, I showed up at the municipal sanitation depot in south Jerusalem, next to a small supermarket. After the workers shared coffee and cigarettes in the dark parking lot, the trucks set out. I joined one that left the working-class Jewish neighborhood of the depot and rumbled across a main street into Beit Safafa, a middle-class Arab neighborhood. The sun wasn’t up yet. Three guys in green jumpsuits and neon vests worked the hydraulics in the back, and the contents of green plastic bins vanished into the maw of the truck.

Soon the neighborhood was awake, its kids passing us on the way to school, some on foot and others in cars driven by women in headscarves or fashionable sunglasses or both. When the crew finished in Beit Safafa, we rolled into Gilo, a Jewish neighborhood built on land captured from Jordan in 1967, and from there to Rachel’s Tomb, a Jewish holy site on the city’s outskirts that was enclosed in concrete walls a decade ago to protect worshipers from gunfire. Then the truck wound back through Beit Safafa, past a bakery and Abu Ibrahim Plumbing, to the depot. The crew-a Muslim Arab citizen of Israel who served in an Israeli infantry unit, a Jewish guy from a settlement just outside the city, and two guys from Palestinian neighborhoods in east Jerusalem-disappeared down the street, trailing the sweet smell of garbage.

Everyone knows that Jerusalem is a place of conflict; it is not a stretch to say that conflict is our brand. Our ethnic and religious divides, our disputed holy sites, our Palestinian minority lagging behind Jews in funding and services-all these things are well-known, and true. But they aren’t the whole truth. This is a city known for its orientation heavenward, but anyone looking to understand Jerusalem in 2014 would be better advised to look down at our dumpsters.

Late last month, garbage made the news in Beirut, where a breakdown of services, including trash collection, has been the result of growing political instability. With trash piling up, residents increasingly feel “that no one is in charge,” as the New York Timesreported. But people in Beirut are no doubt grateful not to be in nearby Aleppo, which is being ground into rubble by the Syrian civil war and where many thousands of residents are dead, or in Fallujah, Iraq, currently ruled by al-Qaida. In places like Aleppo and Fallujah-both less than a day’s drive from Jerusalem-things like regular garbage collection are a utopian fantasy.

Garbage collection is not a marginal detail, but rather a telling sign of whether a community functions. Jerusalem may be famous for conflict, but its streets are orderly and secure. Police have not released homicide numbers for last year, but a scan of press reports from 2013 produced a total of 16 instances of violent death in this city of 800,000. By that measure, our City of Conflict is slightly safer now than Portland, Ore. It is more than twice as safe as San Francisco. A strange form of journalistic omertà seems to prevent most people who write about Jerusalem from mentioning things like that.

If the mortal residents of Jerusalem get lost amid big ideas-“peace” being the idea of the moment-it would not be the first time. This is a city renowned for big ideas, after all, and the lives of normal people have always seemed beside the point; Jerusalemites have traditionally existed as extras in crowd scenes starring prophets and kings. It is perhaps because I am one of those extras that I find ideas less compelling than the fact that we are all able to leave our homes without fear and take our kids to school, go to the supermarket, and use things up and throw them away, knowing they will be collected the next day.

Not all rubbish in Jerusalem is identical. Jews tend to throw out more furniture, the workers say, and in one green bin next to a Jewish building we saw two old black fedoras of the kind worn by the ultra-Orthodox. But the differences tend to be small: For the most part, it’s the same black bags of refuse, cardboard boxes, and diapers. Tzadok Mizrahi, a 30-year veteran of the sanitation department, is in charge of the crews in this area. “Everyone eats the same potatoes,” he told me.

As our truck worked the southern edge of Jerusalem, other crews and contractors were picking up the trash around the Islamic holy compound at Al-Aqsa and the adjacent Jewish holy site at the Western Wall. They picked up the household trash thrown out by the clergy of Byzantine-era churches, by the students at the yeshiva of Mir, by the ethnic supremacists, messianists, hooligans, hipsters, and normal working people of different religions who make up this city. In Arab and Jewish neighborhoods there are skillful scavengers and treasure-hunters who rummage through the bins and rescue anything of value before the trucks arrive. Sometimes the garbage men themselves spot something worth saving and put it aside, though this is now officially discouraged by city regulations.

Inequality is a fact of life here, and this, too, is visible in the garbage-particularly in the uncollected garbage on the streets of some Arab neighborhoods, which also tend to lack sidewalks and parks. But in recent years life in Jerusalem has been getting not worse but slowly, markedly better. New infrastructure projects like a light-rail line serving Jewish and Arab neighborhoods and a bike and pedestrian path running a few miles through other Jewish and Arab neighborhoods are leading to more mixing in public spaces. State-funded health care in Arab neighborhoods is improving. One hears more Arabic than ever spoken in predominantly Jewish commercial areas. More Arab residents are requesting Israeli citizenship and taking the Israeli high-school matriculation exams. Jews and Arabs are not friendly with each other, as a rule, but there are many thousands of interactions between them each day, and nearly all of them are uneventful.

What we have here is not peace but peacefulness-a budding, breakable, imperfect coexistence obvious to anyone sensitive to the pulse of the city. It reflects a broader phenomenon in Israel: According to a poll published last month by Ha’aretz, when Arab Israelis were asked if they were “generally satisfied” with their lives in Israel, 79 percent said yes. That is not an uncomplicated “yes,” but neither is that statistic insignificant.

When the turmoil of our region threatens to intrude, as it inevitably does, there are people who take care of it, as in the recent arrest by the Israeli secret services, presumably aided by information from Palestinians, of members of a would-be al-Qaida cell planning attacks in the city. When I hear of arrests of that kind I am struck less by the fact of their existence than by how rare they are. The city is safe because whatever divides its diverse population, a few key things bind us: the centrality of our families, our awareness of the chaos around us, and our understanding that our fates are precarious and linked. People here seem to understand that if things aren’t good enough they could certainly be much worse-and will be, if we are not careful.

For outsiders, this city will always be a symbol of something, a chip to be moved around in pursuit of lofty goals. So it is in the current peace talks, and so it has always been. But for us, Jerusalem is not an abstraction. It’s a flawed city where normal life has become possible against considerable odds in a region where for most people normalcy is a dream. The people who pick up the garbage here, and the people whose garbage is picked up, look around and know such things are not to be taken for granted. We know there are treasures in the trash.