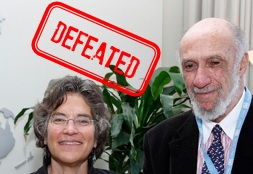 We have just learned that following UN Watch’s campaign exposing and opposing the most biased candidates vying to replace the outgoing Richard Falk — as the UN’s permanent investigator on “Israel’s violations of the principles and bases of international law” — five out of six have already been eliminated. This constitutes a major defeat for virulent anti-Israel activist Phyllis Bennis, who only days ago boasted to her followers:

“By the way, some of you may know this already, I’m now on the short-list of candidates to succeed my great colleague and friend Richard Falk as the next United Nations Special Rapporteur for Human Rights in the Occupied Palestinian Territories. The selection process is underway at the Human Rights Council in Geneva, I’ll let you know…”

Well, now we know: Bennis is gone. One small victory for the true cause of universal human rights.

In addition, the 5-nation vetting panel — exceptionally comprised this year almost entirely of democracies — produced a final list of names that also puts an end to the candidacies of four other severely biased applicants, each of whom was strongly opposed by UN Watch: Christine Chanet, Michael Mansfield, William Schabas, and Johannes Wijenberg.

Chanet had presided over a one-sided UN Human Rights Council inquiry that in 2012 prompted Israel to walk out for two years.

Mansfield and Schabas were key figures in the “Russell Tribunal on Palestine,” a kangaroo court.

Wijenberg, a former Dutch envoy to Saudi Arabia, goes to Qatar conferences on Jerusalem and accuses Israel of “creeping genocide.”

All of these candidates have now been defeated.

Instead, council president Baudelaire Ndong Ella of Gabon has been given a list of three names. In consultation with UN member states — including the powerful Arab and Islamic blocs — the president will make his choice in late March.

The vetting panel’s top candidate is Christina Cerna, who retired three years ago from her career as a human rights specialist with the Washington-based Organization of American States.

In a rare act of UN fairness, the panel gave special weight to the fact that Cerna, unlike the others, has “not previously taken public positions on issues relevant to the mandate.”

That is indeed to her credit, and it is further noteworthy that Cerna did not exclusively seek out this inherently biased position — she had also applied for four other UNHRC jobs.

Regrettably, however, Cerna’s application makes clear that she has every intention of hewing to the skewed mandate, one that according to Amnesty International is inherently biased against the Jewish state, unique in the UN system for its exclusive focus on alleged abuses committed by one side — Israel. In contempt of basic due process, the tainted mandate presumes that Israel will always be found guilty of “violations.”

The panel’s second-ranked contestant is London School of Economics professor Christine Chinkin, mastermind of the notoriously one-sided Goldstone Report. Given that she has twice before delivered for the council’s all-powerful Arab lobby, Chinkin is likely to be their darling.

The final candidate is John Cerone, a professor at the New England School of Law. Though he did not rank in UN Watch’s rogues’ gallery, Cerone’s objectivity is called into question not only by his willingness to take on a selective and politicized mandate. When the Palestinian Authority applied for UN statehood — in violation of its Oslo Accord undertaking not to take any step that will change the status of the West Bank and the Gaza Strip pending the outcome of the permanent status negotiations — Cerone rushed to Ramallah’s defense.

The appointment will be announced by the council president in late March. Governments that truly believe in the principles of human rights should call for the entire mandate to be canceled.