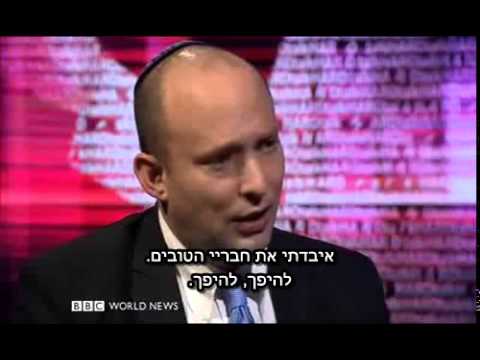 Here we see Israeli economics minister Naftali Bennett making an appearance on the BBC’s ‘Hard Talk’, hosted by one Stephen Sackur, who perhaps needs to learn that in an interview, if you want answers it’s usually a good idea to listen, not talk over your guest and let the interviewee finish his sentences.ï»¿

Nevertheless, Naftali Bennett makes an admirable showing. I especially found it humorous to watch Sackur (who, full disclosure is married to an Iraqi Arab and has always been outspokenly pro-Palestinian) lecture Israel’s economics minister (and a multi-millionaire in his own right) on the state of Israel’s economy.

Money quote from Bennett: “Would you hand over half of Britain to someone who keeps on killing you?”

Of course Sackur didn’t answer that, but in reality the Brits are doing just that in places like Tower Hamlets and Birmingham, although they probably don’t realize it yet. So are the French in La Zone and elsewhere, the Swedes in Malmö, and Norwegians in certain parts of Oslo, among others. This also explains a great deal about the anti-Israel sentiment in many European countries; aside from thei rown generic Jew hatred, they have now imported a huge number of Muslim voters with their own religiously inherent anti-semitism, and politicians if nothing else can count votes.

The implicit threats of boycotts against Israel also come from a similar place. Blackmailers of this sort will always do what they threaten to do to you eventually anyway, so Bennett’s stance that a strong, secure Israel with things the world wants to buy is more likely to prosper and attract trade and investment than a cringing and vulnerable one makes a great deal of sense.