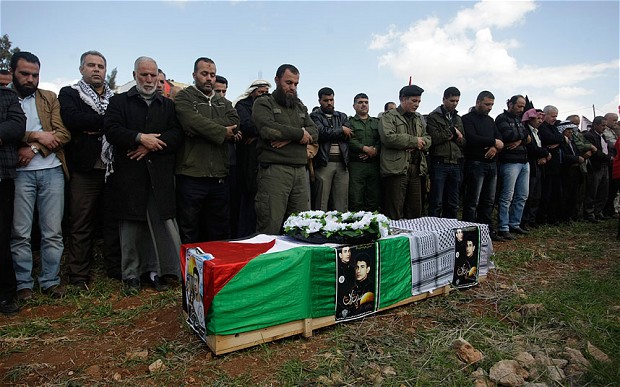 Accusations from Amnesty International that Israel’s army killed Palestinian children with “a callous disregard for human life” have been angrily denied byIsrael .

The87-page report, published on Thursday , detailed what it described as “excessive force to stifle dissent and freedom of expression” since the beginning of 2011. The report accuses Israel of “war crimes and other serious violations of international law” against Palestinians. Amnesty said that more Palestinians living in the West Bank had been killed last year than in 2012 and 2011 combined, and said that more than 8,000 Palestinians – including 1,500 children – have been wounded by rubber bullets and tear gas since 2011.

“The frequency and persistence of arbitrary and abusive force against peaceful protesters in the West Bank by Israeli soldiers and police officers – and the impunity enjoyed by perpetrators – suggests that it is carried out as a matter of policy,” said Philip Luther, Middle East and North Africa director at Amnesty International.

Hours after the report was published, Israeli forces killed a 24-year-old man that they were seeking to arrest, after he refused to turn himself in. Soldiers in the West Bank town of Birzeit bulldozed part of Muataz Washaha’s house after a standoff lasting several hours, and opened fire. His body was found shortly after.

An Israeli military statement said that Washaha had been wanted for “suspected terror activity” and that the forces, which later found an assault rifle in the house, were operating under the premise that he was armed.

And Israel has dismissed Amnesty’s report as biased and inaccurate.

Daniel Taub, Israel’s Ambassador to the UK, said: “Amnesty’s obsessive focus on Israel, and its refusal to recognise the very real threat posed by deliberately-orchestrated violent demonstrations, suggests an agenda that has more to do with politics than human rights.”

His embassy in Londontold The Jewish Chronicle that the report was a mere “stunt” filled with “unverifiable and often contradictory accounts”.

And Mr Taub’s staff accused the charity of “skewed logic” and said more than 130 people had been injured by stone-throwing Palestinians in the West Bank last year. “Scores” of Israelis who had been stabbed, shot and terrorised were ignored by the report, the embassy said.

A spokesman told the paper: “This obsessive, outrageous report has nothing to offer in the genuine and important discussion about how law enforcement authorities should deal with the complex challenges of demonstrations containing violent and potentially lethal elements.”

Under the headline “Amnesty shoots itself in the foot over Israel-West Bank report,” The Jewish Chronicle also criticised Amnesty’s recommendation that the United States, European Union and the rest of the international community to “suspend all transfers of munitions, weapons and other equipment to Israel” to pressure it to change.

The paper quoted a Foreign Office official as saying there was “no evidence” that British-manufactured weapons or equipment had been used “by the Israeli military forces to commit or facilitate violations of international human rights law”.

Another news channel, Arutz Sheva,reported criticism from a Jerusalem-based research organisation that called into question Amnesty’s collection of data.

NGO Monitor says that its “objective is to end the practice used by certain self-declared ‘humanitarian NGOs’ of exploiting the label ‘universal human rights values’ to promote politically and ideologically motivated agendas.”

And ProfessorGerald Steinberg, president of NGO Monitor, said the report’s accusations “are reckless, blatantly biased, and reflect the lack of a credible research fact-finding methodology.” He continued: “Amnesty lacks the expertise and credibility to analyse or assign blame for deaths in the context of violent confrontations in the West Bank.”

In a press release, NGO Monitor said that Amnesty International’s Secretary General, Salil Shetty, “admitted in a February 10 Al Jazeera interview that ‘we are not an expert (sic) on military matters. So we don’t want to, kind of, pontificate on issues we don’t really understand.'”

But Amnesty brushed off criticism by both Mr Taub and NGO Monitor.

“Amnesty International has a worldwide reputation for producing robust, impartial and meticulous research,” said a spokeswoman.

“The report, “Trigger-happy: Israel’s use of excessive force in the West Bank”, has been reviewed by multiple specialists, including experts in international humanitarian law, munitions, and policing.

“NGO Monitor is well known as an organisation which works to oppose scrutiny of human rights violations by the Israeli authorities and military.”