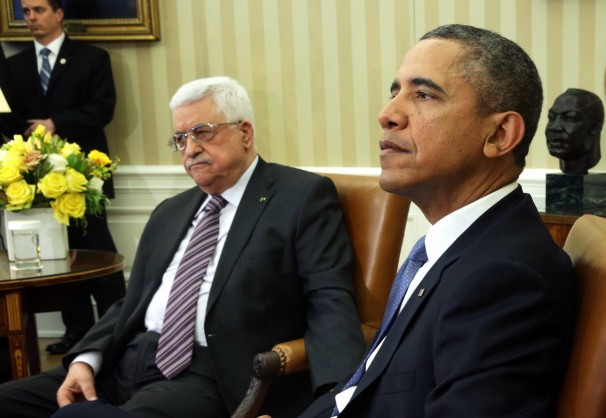 Despite replete evidence of the mendacity of our foes and the recalcitrance of the Palestinian Authority, President Obama operates in his own world. The result is an America that appears off-kilter, unreliable and weak. Consider:

The president praises Mahmoud Abbas, who refuses to recognize the Jewish state or give up the right of return, has refused to hold elections, continues to honor terrorists and has no succession plan. He seems to willfully ignore the PA’s limited desire to make anything approaching a deal with the Jewish state.

While Obama and his secretary of state expend endless hours on the moribund “peace process,” the most urgent issue, Iran’s determination to possess a nuclear weapons capability, is unmatched by the administration’s desire to prevent it. The administration continues to pine for a deal with Iran while it pursues illicit nuclear materials.

As for Russia, the president enacts minor sanctions against discrete Russian officials, forgoing any meaningful economic sanctions. He continues to talk endlessly to Russian President Vladimir Putin, apparently convinced he can talk reason to the brutal despot; Putin in turn shows no sign that he cares what Obama says. The president continues to make empty statements and unconvincing threats, sounding like he expects Russia to understand its invasion is a mistake – by Putin. (“Further provocations will achieve nothing except to further isolate Russia and diminish its place in the world.”) Putin responds by recognizing Crimea as an independent state, the first step toward annexation.

The New York Times delivers a blunt assessment to the White House and its readers: This is a disastrous foreign policy in which mistake follows mistake:

Sanctions and modest help to the Syrian rebels have failed to halt the slaughter; if anything, the killing worsened as negotiations dragged on.

The White House was taken by surprise by Vladimir V. Putin ’s decisions to invade Crimea, but also by China’s increasingly assertive declaration of exclusive rights to airspace and barren islands. Neither the economic pressure nor the cyberattacks that forced Iran to reconsider its approach have prevented North Korea’s stealthy revitalization of its nuclear and missile programs…. But the most stinging critique of Mr. Obama is that the pendulum has swung too far in the direction of nonintervention. Condoleezza Rice, President George W. Bush’s secretary of state, argues that five years of signaling that others need to step in, of stressing that America can no longer police the world, have taken a toll.

And freed from the propaganda bubble of the White House in which no one dares tell the president his foreign policy is in ruins, ex-officials confide that “Mr. Obama erred in failing to have a plan to back up his declaration that President Bashar al-Assad had to leave office.” Maybe they could confide what problems ensued and why that poses a threat to U.S. credibility around the globe. It might be a public service to inform the public and policymakers how this has adversely affected our ability to cope with Russia and Syria.

Most damaging, our allies have lost faith in the administration and complain openly. “Israelis worry there is diminished interest in keeping American aircraft carriers in the Persian Gulf, and fear that if a nuclear deal is struck with Iran, Washington will no longer anchor an alliance to contain Tehran. The Saudis are talking anew about the possibility of needing a nuclear deterrent of their own…. The ‘pivot to Asia,’ which has been slow to materialize, was supposed to be emblematic of a new combination of soft and hard power; it was as much about building trade relationships as making it clear to the Chinese leadership that America has no intention of ceding the East and South China Seas as areas where Beijing could expect to become the sole power.” (Like Walter Cronkite and LBJ, when Obama loses the New York Times, it might be time to rethink things.)

In short, just about every conservative criticism of the administration is now conventional wisdom about the president’s shortcomings. Congress can only do so much. Our allies can only do so much. Ultimately, however, if the president is misguided and wholly unwilling to recognize a series of debacles, bad things will happen in the world. The question remains whether the president will do anything to stop the drift. If not, by the end of the term, the Russia empire will be on the march, Iran may be a nuclear-capable state, China will have intimidated our allies and both democracy and stability in the Middle East will be hobbled. As bad as Obamacare may be, it is exquisite public policy compared to the foreign policy mess.