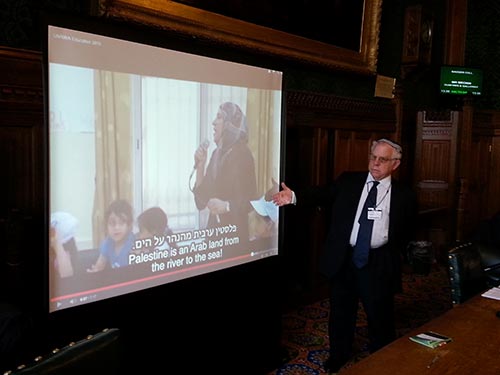 Two news items that may have escaped public attention of late:

Israeli troops were dispatched last week to the UNRWA refugee camp in Jenin, in order to arrest sharpshooters who were firing on Israeli citizens, who had taken refuge in the safe refuge of a United Nations refugee facility. The Arab gunman would not come out quietly and instead fired on the Israeli soldiers, wounding two young Israeli troops in the process. The IDF then stormed their hideout and killed the three Arab terrorists who had holed up in an UNRWA camp. Following that skirmish, Israeli intelligence officials told the Times of Israel that The UNRWA refugee camp in Jenin is now the “Arab terror capital”.

Firing missiles from the safe haven UNRWA refugee facilities in Gaza, Arab terrorists launched at least 70 aerial attacks on Southern Israel, forcing thousands of Israeli residents into shelters only two weeks ago. There are more than 750,000 Arabs who live in refugee conditions in Gaza, none of whom see Gaza as their home for the future- all of whom are led by UNRWA to believe that their homes are waiting for them in the cities that they are firing at: Sderot, Ashkelon, Ashdod and Beersheva, all of which are Israeli cities that replaced Arab villages from before 1948. During the second week of March, 2014, education experts Dr. Arnon Groiss and Mr. Jonathan HaLevi provided academic presentations at venues in the US Congress and the British Parliament concerning indiscretions of UNRWA education:

Concerning US AID and UK DFID funding of UNRWA education, our agency asked US AID and UK DFID if either entity would conduct an evaluation of UNRWA education, which prepares half a million Palestinian students in UNRWA schools to engage in a war to liberate all of Palestine, under the slogan of “the right of return” to Arab villages which were abandoned during the 1948 war. US AID and DFID have not responded that that inquiry.

On February 24, 2014, our agency arranged for a briefing on UNRWA education at the Israel Knesset Parliament for all diplomatic missions that fund UNRWA

All major government agencies that fund UNRWA were invited. 16 funders showed. DFID was there. US AID would not attend.

An official of US AID wrote that US AID is “not involved” with UNRWA education, despite US AID press releases which clearly state that that US AID funds UNRWA schools.

At all briefings, Dr. Groiss displayed the newest Palestinian Authority textbooks in use in the UNRWA schools, and mentioned that there are objective ways to evaluate the new textbooks.

It is important to mention that the Vatican conducted the first evaluation of new Palestinian school books of the Palestinian Authority (PA) in September, 2000. The Vatican PA textbook report concluded that new PA school books promote war, and not peace. That report caused the Italian government to withdraw funds from Palestinian Authority education at the time. Legislators from donor nations can ask the Vatican to share their report the new PA school books that the late Archbishop Pietro Sambi, former Papal Nuncio in Jerusalem, initiated at the time. http://israelbehindthenews.com/bin/content.cgi?ID=7073&q=1

With the UNRWA mandate set to expire on June 30, 2014, the US, the biggest funder of UNRWA, could ask fellow donors to demand that the renewal of UNRWA’s mandate be premised on a reform of UNRWA:

What is not generally understood is that you do not have to go through the UN General Assembly to change UNRWA.

UNRWA is an autonomous body which operates under support from donor nations, who could ask that the UNRWA operation reflect an agenda of peace and reconciliation.

Citizens of donor nation could take the initiative to reform UNRWA, by asking elected their democratically elected officials to ask that UNRWA be true to its slogan: PEACE STARTS HERE.

MP Bob Blackman, a member of the British Parliament who listened intently to the UNRWA education briefing at a House of Commons briefing room with Dr. Gross and Jonathan HaLevi, stressed how important it is that citizens write to elected representatives, on the inappropriateness of a United Nations humanitarian agency which hosts a war education curriculum.

MP Blackman stressed that elected officials who receive such individually written letters of concern will take the issue very seriously.