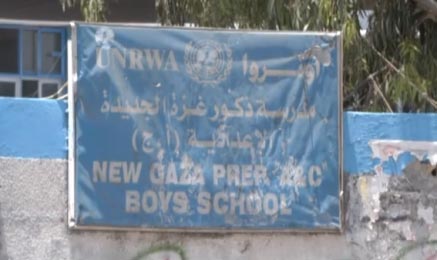 The Center for Near East Policy recently published a report titled “UNRWA: Encouraging Children to Engage in Acts of War.” The study, which was presented to the British Parliament, was commissioned by Dr. Arnon Groiss, who holds a PHD in Islamic Studies from Princeton University and has worked with the Arabic Language Service of the Voice of Israel Radio station for the past 40 years.

According to Groiss’s study, “Palestinian Authority schoolbooks used by UNRWA in the West Bank and the Gaza Strip promote the goal of a violent struggle for the liberation of Palestine. That struggle, which is never restricted to the territories of the West Bank and Gaza alone, is made more compelling in the books with the help of traditional Islamic ideals of jihad and martyrdom. Thus, the Palestinian child in UNRWA schools is exposed to an atmosphere of violence and is mentally prepared for his or her actual participation in the armed struggle in the future.”

For example, a 6th grade Islamic education textbook that was used in UNRWA schools in 2012, stated: “Jihad in the cause of Allah is for raising the flag of Islam and preventing oppression and corruption on earth. When a Muslim man believes that Allah is the one who gives life and death, gain and loss, and that victory and power are in his hands, he then liberates himself from others control and the desire to seek martyrdom are enlivened within his soul.”

In an 8th grade textbook used by UNRWA in 2013, the following poem is mentioned: “O brother, the oppressors have exceeded all bounds and jihad and sacrifice are necessary; So draw your sword from its sheath, for it should be sheathed no more; O brother, O proud Arab; I see that our date is today, not tomorrow; O brother, we have a sister in Jerusalem to whom the slaughterers have prepared the knives.”

“O brother, rise towards the prayer direction (Qibla) of east and west and let us defend the Church of the Holy Sepulcher and the Al Aqsa Mosque,” the poem reads. “O brother, if on her soil my blood flows and the hand closes on its pebbles; And death calls and the sword turns mad and the fire burns there; then kiss the martyr on her ground who called Allah in her name and fell as a martyr; O Palestine, the youth will redeem your sanctuary; may the sacrificing person and the redeemed one be exalted; O Palestine, our chests will defend you; it is either life or destruction.”

UNRWA Spokesperson Christopher Guinness does not deny that their organization uses Palestinian Authority textbooks: “As agreed upon when the United Nations first established the UNRWA education program, UNRWA uses the textbooks provided by the governments where they were located. The rationale was that by following the host country curriculum, the children would be able to take state examinations at the end of each cycle and thus be able to transition to upper secondary and university education provided by the host government.”

“The curricula and the textbooks in all countries where UNRWA operates have been reviewed and reformed often with the support of major donors including the US and EU,” Guinness claims. “UNRWA is not complacent as to the potential of bias in host country curricula and remains proactive in this regard. In 2013, UNRWA launched a “Curriculum Framework” that is designed to enhance host country curricula and establish standard criteria for analyzing and assessing all textbooks for issues related to bias, neutrality and in general to ensure they reflect UN values and UNRWA expectations. It also provides overall guidance to make sure that the students’ classroom experiences overall promote those values and principles.”

“To further strengthen human rights education and a culture of peace in all of its schools, UNRWA has launched a Human Rights, Conflict Resolution and Tolerance (HRCRT) program in all UNRWA schools since 2000 with generous funding from the US government. The HRCRT program directly empowers teachers to address these issues within the clear framework of international human rights law and UN values,” he stated.

“As a matter of principle and as an Agency of the United Nations, UNRWA does not promote or condone armed conflict or violence of any kind,” he claimed. “On the contrary, UNRWA opposes all use of violence and advocates on behalf of a just and durable solution for Palestine refugees achieved through peaceful means such as negotiations.”

David Bedein, the director of the Center for Near East Policy, responded to the claims made by UNRWA: “It might be important that children and grandchildren of 1948 refugees be able to get secondary and university education in their respective countries through the use of local curriculum and textbooks. But such books must not propagate anti-peace and pro-violence notions that, in their turn, contribute to the perpetuation of the conflict – in total contradiction to UN principles to which UNRWA, as a UN agency, should be committed.”

“The curricula and textbooks in all countries where UNRWA operates may have been reviewed and reformed often, but the latest textbooks of which we have got hold (published mostly in 2013) still contain significant improper material that UNRWA must not teach,” Bedein stresses. “That means that the process of revision and reform has so far been clearly futile.”

“The problem is by no means restricted to potential bias. According to the well-documented findings we have presented in our reports (of which the general features are mentioned above), the books used by UNRWA make up a war curriculum,” Bedein emphasizes. “Consequently, they should undergo a thorough revision – in line with the suggested list I have submitted – so that they indeed ‘reflect UN values’ and ‘make sure the students’ classroom experience promote those values and principles,’ because they presently reflect and promote exactly the opposite.”

Bedein had harsh words for UNRWA’s program to promote human rights education among Palestinian children: “The problem with the UNRWA Human Rights, Conflict Resolution and Tolerance (HRCRT) Program, of which the books for grades 1-6 we have seen, is that it solely deals with Palestinian society and almost never refers to the conflict with the Jewish/Israeli ‘other.’ The two references to the conflict I have found in these 12 books are of a demonizing character: one is a sentence saying that the children of Gaza fly kites in spite of the [Israeli] siege and the other features a photo of a Palestinian family in a tent and explains that its home was demolished [by Israel, presumably].”

“To sum up,” Bedein concluded, “UNRWA, being an international body, must not let hateful language and advocacy of violence into the textbooks it uses. Such books should be immediately discarded and wholly replaced by other ones, or else, UNRWA should cease all its educational activity and pass its facilities and work force over to the local governments. It has been a negative element in the region’s educational history for too long.”