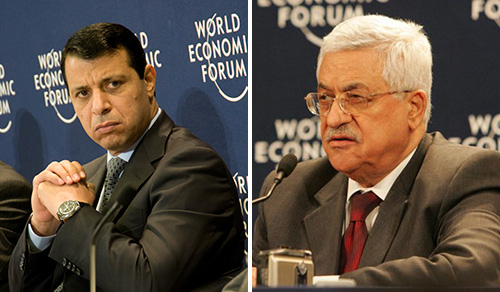 Palestinian Authority President Mahmoud Abbas has finally made peace with Hamas. But will he able to extinguish the fire that has erupted in his own backyard?

Earlier this week, Abbas decided to expel five “unruly” officials from Fatah, plunging the faction into turmoil and triggering calls for a revolt against the Palestinian Authority [PA] president.

Dahlan was expelled from Fatah three years ago after falling out with Abbas and his two sons, Yasser and Tarek. Since then, Dahlan, a former security commander of the Gaza Strip and an elected member of the Palestinian Legislative Council, has been living in the United Arab Emirates.

In the context of the ugly dispute between the two, Abbas has accused Dahlan of being responsible for the murder of six Palestinians and involvement in the “poisoning” of former PLO leader Yasser Arafat. Others, however, believe that the expulsion of the five men is connected to preparations for holding Fatah’s seventh general conference, where the faction’s leaders are selected. The conference is expected to take place in August.

Abbas’s move is seen in the context of his efforts to “cleanse” Fatah of “unruly” officials who pose a direct challenge to his autocratic leadership. Obviously, the 79-year-old Palestinian Authority president has no plans to retire or pave the way for the emergence of new and younger leaders.

But judging from the strong reactions of the ousted Fatah officials and their supporters, it’s clear that Fatah is facing one of its worst crises in years – one that is likely to lead to a split in the faction. This, of course, will play into the hands of Hamas and improve its chances of winning the presidential and parliamentary elections, when and if they are held in the West Bank and Gaza Strip.

The expulsion of the five officials saw Fatah activists take to the streets in some parts of the Gaza Strip, where they condemned Abbas as a “dictator.”

Responding to Abbas’s move, Dahlan told the PA president that he can “go to hell,” adding: “Fatah will never become the private fiefdom of Abbas and his sons, Yasser and Tarek.” Dahlan went on to accuse Abbas and his sons of steering Fatah toward “national and moral deviation.”

Referring to the ousted officials, Dahlan said: “These leaders did not come to Fatah from five-star hotels; rather, they come from the school of struggle and Israeli prisons. These are men who put their lives at stake while Abbas and his family were enjoying the money of Fatah and the people in Syria, Lebanon and Tunisia. We won’t allow Mahmoud [Abbas] and Tarek and Yasser to steal Fatah from us.”

Sami Mashharawi, a Fatah leader closely associated with Dahlan, also lashed out at Abbas. “Mahmoud Abbas has decided, in his capacity as Chief Executive Officer, to fire those who he believes work for his royal family. Abbas’s trivial decision shows that the man is full of hatred.”

Mashharawi also denounced Abbas for having brought “disgrace” to Fatah and all Palestinians.

Commenting on his expulsion from Fatah, Abu Zaida denounced the decision as illegal. “My relationship with Fatah and its members and cadres cannot be canceled through an illegal decision,” he said. “Apparently, this is the fate of anyone who dares to express his opinion or believes that we live in a democratic society that respects freedom of expression.”

The unprecedented verbal attacks on Abbas reflect the deepening crisis in Fatah. Dahlan and the five senior Fatah officials who were expelled by Abbas enjoy widespread support among Palestinians, particularly in the Gaza Strip. And it is obvious that Dahlan and his loyalists do not intend this time to let Abbas get away with his controversial decision.

The renewed tensions in Fatah came as Abbas announced that he has instructed the new unity government to prepare for long overdue presidential and parliamentary elections. He said he is hoping that the elections will be held within six months and that he wants Hamas to participate in the vote, as was the situation in January 2006.

In the wake of the infighting in Fatah, Hamas’s chances of winning the elections, when and if they are held, do not seem to be bad at all. In 2006, Fatah lost the parliamentary election due to internal squabbling and tensions, as well as financial and administrative corruption. Eight years later, Fatah appears to be suffering from the same problems and is likely to be defeated once again at the ballot box.