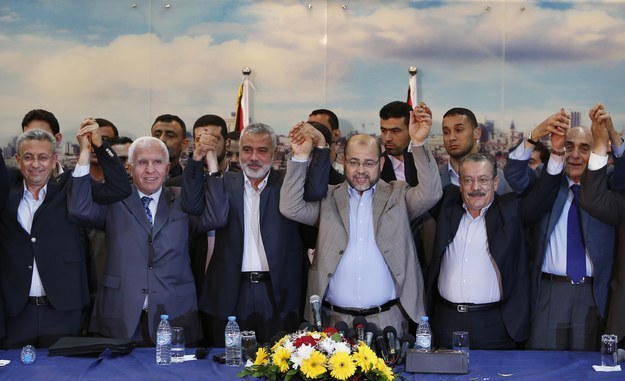 JERUSALEM – United States officials have been holding secret back-channel talks with Hamas over the last six months to discuss their role in the newly formed unity government, according to two senior diplomatic sources with direct knowledge of the talks.

The meetings were held between U.S. intermediaries and Hamas’ leadership, which lives outside the Gaza Strip in third-party countries ranging from Egypt to Qatar and Jordan. Topics included the ceasefire agreement with Israel and the recently formed unity government between Hamas and Fatah.

During the talks, Hamas gave assurances that allowed the U.S. to support the unity government, despite heavy pressure by the Israeli government for them to condemn it, the diplomatic officials – one American and one Palestinian – said. They said those assurances including a commitment to maintaining a ceasefire with Israel.

“Our administration needed to hear from them that this unity government would move toward democratic elections, and toward a more peaceful resolution with the entire region,” said one U.S. official familiar with the talks. He spoke on condition of anonymity, as the U.S, government’s official stance is that it has not, and will not, talk to Hamas until certain preconditions are met. “It was important to have that line of communication,” the U.S. official said.

State Department deputy spokesman Marie Harf denied the talks. “These assertions are completely untrue,” Harf told BuzzFeed. “There is no such back channel. Our position on Hamas has not changed.”

Harf said she told a press briefing yesterday: “As you all know, Hamas is a designated foreign terrorist organization. The United States does not and will not provide it assistance. Per longstanding U.S. policy, we do not have any contact with Hamas. No members of Hamas and no ministers affiliated with Hamas, as I said, are part of this government.”

The U.S. government has categorically denied it was speaking to Hamas for years. Assistant Secretary of State for European and Eurasian Affairs Victoria Nuland said in 2012 while she was still State Department spokesperson that claims that the U.S. and Hamas had a back channel were “bizarre.”

“I want to say here that these assertions are completely untrue. There is no such back channel. And our position on Hamas has not changed,” Nuland said in a press briefing. A State Department spokesman did not immediately respond to a request for comment on Wednesday.

On Wednesday, Secretary of State John Kerry confirmed that the U.S. would work with the new Palestinian government as needed.

“We are going to be watching (the government) very closely, as we said from day one, to absolutely ensure that it upholds each of those things it has talked about, that it doesn’t cross the line,” Kerry said. The U.S. has said that the new transitional government, led by Palestinian Authority Prime Minister Rami Hamdallah and with ministries run mostly by technocrats, represents a significant step toward ending a seven-year feud between the Palestinian political factions Hamas, which controls the Gaza Strip, and Fatah, which controls the West Bank.

Israeli officials slammed the announcement by Kerry, saying the U.S. was sanctioning terrorism.

“If the U.S. administration wants to advance peace, it should be calling on [Palestinian Authority President Mahmoud] Abbas to end his pact with Hamas and return to peace talks with Israel. Instead it is enabling Abbas to believe that it is acceptable to form a government with a terrorist organization,” Israeli officials said in a statement.

When Hamas seized control of the Gaza Strip in June 2007, the Quartet on the Middle East peacemakers set out three conditions that the Islamist group would have to meet before it received international diplomatic recognition. Those conditions included recognizing the state of Israel, abiding by previous diplomatic agreements, and renouncing violence. Israeli officials point to statements made by Hamas current leadership as proof of their intent to continue an armed struggle against the Jewish state.

“We understand Israel’s concerns, but this was a way of ensuring that Hamas kept its more extreme elements at bay so that the U.S. could support a unity government,” said the American official. “These talks were very much to ensure that our concerns, and those of the Israeli government, were being met as the Palestinians move forward in the coming months.”

He said that talks had ensured that the new unity government would “toe the line” to ensure ongoing U.S. aid. He stressed that the U.S. continues to not formally recognize Hamas, and would not do so until they formally renounced violence.

“We have imparted on them, very strongly, the fact that until they meet the criteria set forth by the Quartet there will be no official ties between us and Hamas,” said the U.S. official.

The meetings that were held included an exchange of letters, with Hamas officials in Gaza as well as those in exile viewing the text of the letters before they were exchanged, a senior Palestinian official said.

“It must be very clear they were not just speaking to Hamas in exile, but to our entire leadership,” said the official, who also spoke on condition of anonymity as “the Americans made it clear these meetings should not be made public.”

He added, “It should be of no great surprise that an American team was speaking to Hamas, there is dialogue with Hamas through most of the Western world.”

Over the last year, Hamas has revealed that they have been holding talks with at least five EU countries.

“I can say it’s an important level (of officials), without defining whether it’s junior or senior, and the channels are working,” Osama Hamdan, a senior Hamas official, said about the EU talksin an interview with AP last year in Beirut. “It’s not just a contact. It’s channels of talking.”