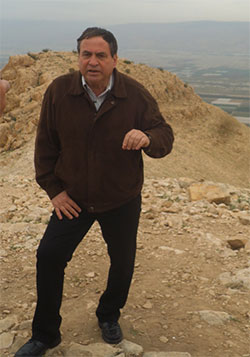 At the David Citadel Hotel during Prime Minister Harper’s visit to Israel this past January, I bumped into Maj. Gen. (res.) Uzi Dayan, who invited me to join him on a security briefing for a handful of journalists on Mt. Sarbata, a pyramid shaped peak, which is a high point in the West Bank overlooking the Jordan Valley.

I am very glad I went on this security briefing as “seeing is believing” and from Sarbata it is easy to understand why Dayan maintains that Israel cannot cede control of the Jordan Valley in any potential future peace deal with the Palestinians.

Born in 1948, Uzi Dayan is the nephew of General Moshe Dayan–his father Zorik Dayan, Moshe’s younger brother, was killed in the 1948 War of Independence, when Uzi was a baby.

From the towering peak of Sarbata, Dayan, who was head of the Israel Defense Forces Central Command, IDF deputy chief of staff, and National Security Adviser to then Prime Minister Rabin, laid out why Israel must keep military control of the Jordan Valley, which he believes is “critical for Israel to maintain defensible borders.”

The sweeping 360 degree view from Sarbata says it all. Looking eastward, from this towering peak the complete Jordan valley with its rich farm land was laid out before my eyes, and I could see the Adomite Mountains of Jordan in the background, as well as an expansive view of the Dead Sea. Looking westward from Sarbata, you can see as far as Jerusalem.

As Dayan pointed out, Sarbata’s strategic importance was recognized by Jews in ancient times. It was the second station on which signal fires were relayed from the Mount of Olives in Jerusalem (fires were lit in order to signal the new moon and the beginning of the various Jewish festivals.)

Dayan explained that a withdrawal from the Jordan Valley would be a major error. The “Arab Spring” which “has led to civil wars and unprecedented bloodshed and increased terrorism” has created real “uncertainty,” and as Dayan said in a time of uncertainty there is one thing you don’t do- ” you don’t give up strategic assets.”

Standing atop Sarbata, it is impossible not to see what Dayan is talking about which is that the Jordan Valley serves as Israel’s strategically vital security buffer against threats from the East from aggressive state and non-state actors alike.

According to Dayan, in the south of Israel (with the demilitarization in Sinai) and in the north (given that Israel has kept the Golan Heights), “Israel has defensible borders.” In regard to the Golan, Dayan mentioned the nightmare Israel would be facing if had agreed to a [Turkish Prime Minister Recep Tayyip] Erdogan- brokered peace deal with Syria and withdrawn from the Golan Heights. “We’d now have Sunni terrorists at the Sea of Galilee,” Dayan said.

Dayan pointed out that “Israel is small and narrow” with “seventy percent of its population and 80 percent of its industrial capacity” concentrated in the narrow coastal strip between the Mediterranean Sea and the West Bank.

“This West Bank topography gives a distinct advantage to any attacker in terms of observation, firepower, and good defensive capability against an Israeli ground response,” Dayan said.

Dayan spoke of the three things that are required for Israeli security: fundamental strategic depth; room to wage war against the threat of conventional attack from the outside; and room that allows for effectively combating terrorism.

In Dayan’s view, Israel’s need for strategic depth only increases in the age of ballistic missiles and long-range rockets, which threaten Israeli cities. As Dayan has written in a recent paper regarding future conflicts, “IDF ground units will be forced to operate for long periods of time without significant assistance from the Israeli Air Force. The air force will be busy achieving air superiority through destroying enemy air defenses and suppressing the launching of ballistic missiles and rockets aimed at Israel’s cities. In addition, the threat of nuclear arms in the region reinforces the need for a strategic depth required to deploy early warning and interception systems.”

According to Dayan, even a limited IDF force deployed in the Jordan Valley should be able defend Israel against an attack from the east, providing it with enough room to wage war. The Jordan Rift Valley ranges from six to 14 kilometers (four to nine miles) wide. Importantly, the mountains on the valley’s western edge (ranging from 900 to 1,400 meters high) create a physical defensive barrier that is traversable only through five mountain passes.

On Mt. Sarbata, Dayan also spoke of how US Secretary of State John Kerry proposed a security plan that would ultimately remove the IDF from the Jordan Valley. The Americans have tried to convince the Israelis that control over the Jordan Valley could be replaced by early detection systems in the Jordan Valley backed by the deployment of foreign forces.

Dayan, however, dismissed this American proposal, saying that no warning system can replace the defensive space of the Jordan Valley. He added that “Israel can’t rely on foreign forces to combat terrorism”, and Israel’s experience in Lebanon has shown that “foreign forces will be the first to flee the scene should a crises arise.”

He stressed that foreign troops simply won’t risk their lives to protect Israel, and thus Israel cannot outsource its security to them. ( Editor’s note: The recent situation in Iraq only reinforces Dayan’s assessment in my view. We have seen how the ISIS jihadists have taken over parts of Iraq, as Iraqi security forces, trained over the course of five years by the US military, have literally left their shirts on the ground and fled when rather than fight them. If Sunni security guards would not fight ISIS soldiers in Iraq in service to Prime Minister Nouri al-Maliki’s Shi’ite government, then why would a US-trained Arab force in the Jordan Valley fight fellow Arabs to protect the Jewish state? As it is, although this has not been widely reported, the ISIS has been fighting Jordanian troops in Ma’an (South Jordan), and the ISIS has said it would like to overthrow King Abdullah. Increasingly Jordan is worried that homegrown ISIS recruits could take action in Jordan. To prevent any possible ISIS advance on Israel from the East, Israel would need control of the Jordan Valley.)

Dayan also noted that “only Israel’s presence on the outer eastern border of the West Bank (the Jordan River and Valley) will enable genuine demilitarization of the Palestinian Authority” under any future peace arrangement.

This demilitarization has always been a necessary ingredient for Israel to agree to a two state solution and is necessary to ensure such a peace treaty would not “sustainable.”

In summary, Dayan said that the Jordan Valley is the eastern buffer the surrounding Israel and in particular, Jerusalem. Israel has learned from its experience withdrawing from southern Lebanon and Gaza that “If Israel fails to control the buffer zone, the entire area we withdraw from will become a terrorist entity.”