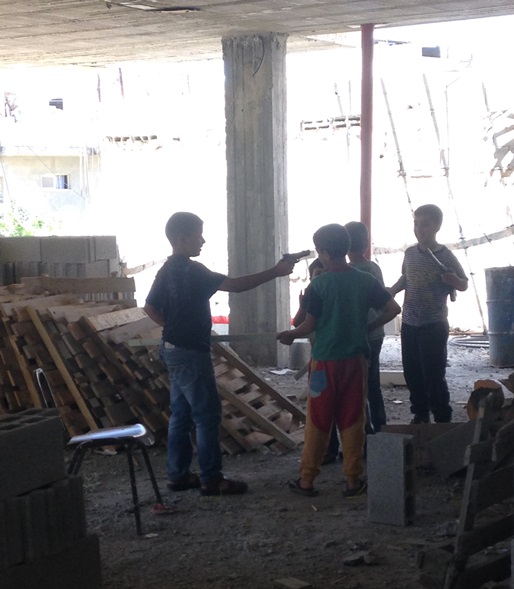 Before signing up to go a tour of Bethlehem and Hebron in the Palestinian territories given by Green Olive Tours, I had concerns about how they would portray the Israeli -Palestinian conflict. Now after seeing it for myself how they slant their tours, I can see those concerns were warranted.

As the tour began I approached the meeting point to be greeted by a very amenable Israeli man who offered me an information packet and sent us on our bus to Bethlehem and Hebron for the next eight hours. We arrived in Hebron after picking up our tour guide Samir who was a most welcoming Palestinian Christian, and stopped at a glass factory. There I met a couple of young Palestinian boys who were anxious for me to purchase a Palestine bracelet that their families sold to make money. The streets were empty because of Ramadan and our small group of seven people (I and six Europeans) was noticeable. Along the way our tour guide talked to us about the atrocities committed against him and his fellow Palestinians by the IDF and Israelis. As someone who spends a substantial amount of time investigating the complexities of the Arab-Israeli conflict, I was intrigued by some of the things he said. He informed me (incorrectly, please do not think for a moment this is factual) that Israel has never followed a UN Resolution.

The most fascinating portion of the day was lunch which I had at a Palestinian man’s house who was married with a two year old son. This was a home as clean and upscale as every home I had ever visited in Jerusalem. He had lots of couches, clean tile floors, and paintings hung all over and photos of his family. His sisters all attended university, he owns the shop below his home and his wife owns a beauty store. They were typical definition of middle class family. Our tour group sat to eat and he sat with us but did not eat due to Ramadan. We spoke for a long time and I asked him why, if he did not support his government calling for the destruction of Israel, did he and his friends not call for an election or go out on the streets to protest the injustice? He responded by telling me I asked him hard questions.

I also asked him what his personal solution would be for the conflict. His response that he wants to see a ” one state” solution for the area that is now the West Bank Gaza and Israel (ie that is a code word for the destruction of Israel as a Jewish state). He was not advocating a two state solution. He remarked that he didn’t understand why people had state boundaries or why the world required passports. The rest of the tour group was engaged in the meal and only half listened to our conversation. I asked him about his private religious practices. He told me that before he married his wife, he told her that if she did not cover herself the way the Quran instructed, they could not marry because “she knew what her God told her to do.”

We then arrived in Bethlehem, and Samir showed us the Deheishe refugee camp run by UNRWA. The Palestinians living there are in cramped quarters, with dirt, and graffiti everywhere (much of the graffiti promotes maximalist claims and all of it was put there by the residents). Samir briefly explained about their displacement following 1948, but at no time did he discuss whether it is really reasonable for the Palestinians to demand that the refugees and their descendants (now four generations of them) all be entitled to return to villages within 1948 Israel that no longer exist, rather than being resettled with dignity now by putting up permanent more comfortable housing in the West Bank under the Palestinian Authority. The conditions in the refugee camp I saw are genuine third world but it does not have to be this way. With all the aid money the PA gets, the refugees could easily have been resettled in the West Bank, as part of a framework for a genuine two state solution. Instead, as I saw in Deheishe, the descendants of refugees are left to languish there as a means of continuing to fuel the conflict, rather than create a model for a genuine two state solution by encouraging the refugees and their descendants to want to rebuild their lives in an area which could be a future Palestinian state (as opposed to trying to return to Israel en masse so they can effectively wipe out the Jewish state). It is a jarring experience to see the refugee camps, but it is not sufficient to simply blame Israel for this squalor of the Palestinian refugees in these camps.

On our tour, I saw the separation barrier between Israel and the PA that everyone raises serious questions over, and on it was painted scores and scores of graffiti claiming “Free Palestine” and “We stand with the Palestinian people.”

That tour was first time I had come face to face with Palestinians that I had been reading about for so long. As a Jewish woman who loves Israel and actively supports the state, the tour gave me a real glimpse of how the other side thinks.

Additionally, the tour that day captured why Israel is often demonized in the media. In the short day, the seven Europeans who had never been to Israel before saw the result of the neglect by the Arab world of an entire population of Arab refugees. The participants on the tour saw crumbling cement houses and children playing in dirt with two by four wood blocks and guns. What are they supposed to think if they see Deheishe and then compare it to other locations in Israel or elsewhere in the world?

The tour advertised the supposed real view of the West Bank. Samir said he didn’t hate Israelis, but he hated the Israeli government. He didn’t mention whether the PA and the governments of the Arab states were responsible for any of the problem, and to that extent the tour was very imbalanced. Green Olive Tours, I want to believe, has well-meaning intentions for peace and cooperation between the people of the region. But, in order to truly foster these principles it would need to stop demonizing Israel and providing a tour that only promotes the claims of one side of this complicated equation.