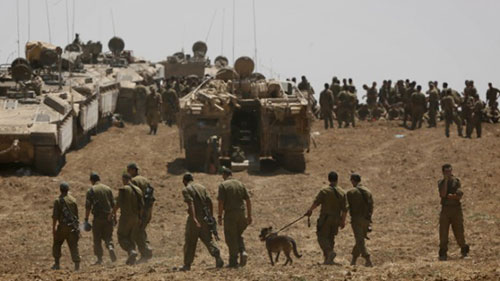 Facebook
Twitter
Pinterest
WhatsApp
Today I am feeling a far greater certainty that our government is going to see through this war to its necessary end. That our prime minister is working with resolve, looking first at the people of our nation and not over his shoulder at Obama, or the UN.
Another 16,000 reservists have been called up and more troops were deployed in Gaza today. We are stepping up the pace of the fighting, and expanding the arena of battle, at the same time that we are seeking and destroying tunnels. We have sent a delegation to Egypt, where a ceasefire is being discussed. But Netanyahu says ceasefire or no ceasefire, we will not stop our work. He will not accept any ceasefire proposal that does not allow us to complete our work on the tunnels.

In fact, Prime Minister Netanyahu’s words spoken before this morning’s Security Cabinet meeting suggesting that we are now aiming for the full demilitarization of Gaza (emphasis added):

”We have struck hard at thousands of terrorist targets: Command centers, rocket arsenals, production facilities, launch areas and hundreds of terrorists have been killed. These achievements and the neutralization of the tunnels are only the first stage in the demilitarization of the Gaza Strip…

”We are working around the clock, shoulder to shoulder, sagaciously and responsibly, for the people of Israel. Naturally, we cannot share with the public all of the information and all of the considerations at our disposal. We have an orderly plan and we are acting accordingly.”

But he also said this, with regard to the demilitarization of the Gaza Strip:

“The US, the EU and other important elements in the international community have accepted our position and I must say that this was not an easy thing to achieve but we did it together, with hard work.”

I read it and thought, “Nah… no way.” Then I thought that maybe it’s true but perhaps in order to bring the international community on board, Netanyahu promised who-knows- what with regard to “negotiations.”

But my checking – and I have two very solid sources here, one with PA connections and Arabic-speaking – indicates that this is real, or may yet be, and that Netanyahu promised nothing in terms of a negotiating position, or what we would give to Abbas with regard to “two states” or his position in Judea and Samaria.

What may be the case is that the international community would hope to see Abbas involved in a demilitarized Gaza at some level – at a bare minimum, regarding supervision of crossings.

But this isn’t about the community’s desire to enhance Abbas’s position.This is about fear and hatred of Hamas, and thus an eagerness to see it taken out.

One of my sources spoke specifically about growing fear of radical jihadists in Europe, which has motivated the EU to completely support Israel’s bid to undo Hamas. “One-hundred percent,” he said.

And then this same source said, without blinking an eye, “But not the United States. Obama is for the Muslim Brotherhood.” It was his speculation that Netanyahu mentioned the US too so as to present a solid front, but that in the end the US, because of its position, would be frozen out.

Netanyahu also spoke about “other important elements in the international community who have accepted our position.” Why wouldn’t he name these elements? Because they are elements who prefer not to be publicly allied with Israel, even as they support Israel’s position against Hamas.

The first of those elements would, quite clearly, be Egypt: Egypt’s president, al-Sisi, despises the Brotherhood.

But we can look further than this:

Khaled Abu Toameh has just written an article about the alarm expressed in certain Arab quarters with the current pro-Brotherhood position being taken by the US, which ultimately might even bring Iran into the picture.

“According to a senior Abbas advisor, the Palestinian Authority president urged the Saudi monarch to exert pressure on the Obama Administration to keep Qatar and Turkey out of the picture.

And so, my friends, we have to sit tight and see how this plays out now. I do not say it metaphorically, but rather in very real terms: Please pray.

The PR war may have taken a turn for the better as well, because the lethal antics of Hamas and its partner-in-terrorism, UNRWA, are being exposed at a new level.

What I wish to focus on here is one specific incident, with more to follow soon. I ask that you note it and share it absolutely as broadly as possible. Please!.

You know the routine: Tell people, write letters to the editor and op-eds in local papers, put out information in Internet discussion groups and post it on your FB pages. Do talkbacks on the Internet and call in to radio shows. Send information (with the URL) to editors and demand that they cover this. Israel is being libeled daily. Help turn the tide. Working together you can.

The news that has been released today is a mind-boggler.

Two days ago, we lost three soldiers because an UNRWA clinic was booby-trapped, while some additional 17 soldiers were wounded. The soldiers were in the vicinity of the clinic because they were working on dismantling tunnels.

Today this information has been released (emphasis added):

“Over eighty kilograms of explosives were built into the UN-funded hospital’s walls themselves, it was cleared for publication Thursday – revealing that the clinic itself was built to mask, and perform, potential acts of terror on the IDF.

“Moreover, the clinic was built over tens of terror tunnels, according to the report.”

Three times in this war alone (yes, it’s happened before), rockets have been discovered in an UNRWA facility and UNRWA staff don’t know how it got there.

But eighty kilograms of explosives built into the walls of an UNRWA clinic? Tens of tunnels built under an UNRWA clinic? So far UNRWA has had no response, likely because there is nothing they can say without further implicating themselves.

Please help make sure large numbers of people know about this (you will NOT find it in your mainstream media).

There is a great deal more to say about Hamas and how it is functioning, all of which needs to be put out broadly. I will following with more in coming posts.

This material is transmitted by Arlene only to persons who have requested it or agreed to receive it. If you are on the list and wish to be removed, contact Arlene and include your name in the text of the message.