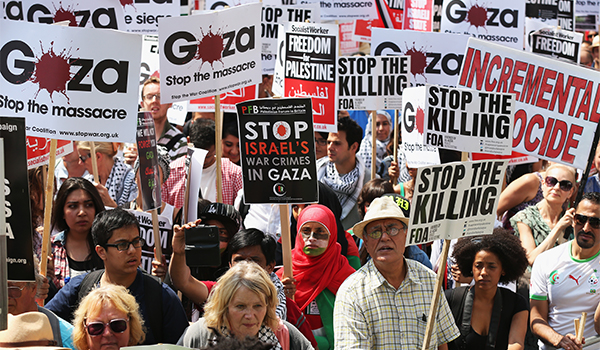 Once again neighboring enemies are warring in diametrically opposite ways.

Westerners romanticize the Hamas cause; fellow Arabs of the Gulf do not. Westerners critical of Israel are still willing to visit Israel; sympathizers of Hamas do not wish to visit Gaza.

Democracy and free markets bring Westerners liberty, human rights, and prosperity – but many Westerners scorn these things in Israel, siding with those who deny human rights, ruin their economy, and practice a brutal prejudice against women, gays, and non-Muslims. In Gaza, a gay reporter, a female reporter with bare arms, a reporter with a small crucifix around his neck, the rare journalist who, surrounded by screaming Hamas supporters, dares to broadcast the truth from Gaza – all these in private would admit to being in fear while they are in Gaza in a way they are not when in Israel.

If 1,000 Arabs a week are killed by other Arabs in Syria and Iraq – whether bombed, shot, gassed, or beheaded – the Western world snoozes. If 400 Arabs are killed in a three-week war with Israel, that world suddenly awakes to damn Israelis as killers. Apparently the West, in racist fashion, assumes that killing one another is what Arabs do best. But when Israelis kill those who wish to kill them, outrage follows.

When Israel wins militarily, it seems to lose politically. When Hamas loses, it seems to win. A European may like the idea of Westerners’ losing to non-Westerners, as long as it is not himself who loses.

Europeans do not protest much when Vladimir Putin carves up Georgia or swallows Crimea. When Russian surrogates shoot down a passenger plane carrying many Europeans, Europe nonetheless stays mostly quiet. There are no protests in Paris over the divided city of Nicosia and the harsh Turkish occupation of Cyprus, which has lasted four decades now. No one in Berlin objects that Russia occupies the Sakhalin Islands or China has absorbed Tibet. Europeans assume that the strong who could hurt them can dictate as they wish.

Seventy years ago 13 million German-speakers lost their eastern lands and walked back into Germany; their descendants are not considered refugees. At the same time hundreds of thousands of Palestinians fled into the West Bank; their offspring are considered perpetual refugees. If Jews, rather than Poles, were now living on formerly Prussian land in Poland, then, given the prevalence of anti-Semitism, a German “refugee” movement to take back sacred soil would be in full force.

Israel does not lecture the Obama administration about the morality of killing 2,500 suspected terrorists through judge/jury/executioner preemptive drone strikes – at least not in the manner in which the Obama administration sermonizes to Israel about its less lethal defense against Hamas’s rain of missiles into Israel. America can blow up suspected terrorists thousands of miles away who one day might have threatened Americans; Israel cannot blow up known terrorists who are right now killing Israelis.

What explains the inexplicable?

Hamas is deserving of sympathy while al-Qaeda mostly is not, largely because of the feeling that the former cannot do much to Americans, and the latter might do a lot. Westerners, particularly Europeans, sympathize with the underdog in the Middle East as a sort of self-flagellation, a catharsis to deal with their own empty privilege. Postmodern Westerners are guilty about their affluence and leisure, but not to the point of surrendering them. They square the circle of criticizing what they are by projecting their self-animus onto Israel, a small, successful Western outpost surrounded by the less successful Other.

Timidity explains much of the Europeans’ easy damnation of Israel. Putin escapes the disdain accorded to Netanyahu, because Netanyahu governs a small nation and is predictably reasonable; Putin governs a large one and is predictably unreasonable. Trashing Putin might involve some risk; trashing Netanyahu brings psychological relief. If Israel were large and Netanyahu demonic, and if Russia were small and Putin Westernized and reasonable, then our cheap scorn would be leveled at Russia and not Israel.

There is no cultural downside in championing Hamas. The multicultural romance of the Other trumps even the endemic misogyny, homophobia, and religious bigotry of this particular Other. Seeing ourselves in Israel and not liking what we see outweighs the fact that Israel is tolerant, transparent, and free.

Anti-Semitism still matters. The growing crowds of Middle Easterners in Europe are now channeling the Nazis of the 1930s; they chant slogans not heard since the Third Reich. Europe, where the Holocaust gestated, is not outraged; apparently, in some sick way, Europeans are aware that Arabs are saying things in their streets that they cannot say but may increasingly wish to. A European shrugs when all of Crimea is swallowed up, but is enraged that Israel patrols the West Bank.

Is there a solution to these multiple paradoxes? For all the hypocrisies in the West and in the Middle East, human nature remains constant – opportunistic, fearful, and fickle. If Israel blows up Hamas’s tunnels, dismantles its arsenals, destroys its missiles, devastates its military, and leaves Hamas weak and discredited, the world will quietly turn its attention away in a sort of grudging admiration of Israel’s success, with an unspoken conclusion that Hamas may have gotten what it asked for. And those left amid the wreckage that Hamas brought upon them will among themselves blame Hamas as much as Israel for their miseries – in the tradition in which losers blame their own dictators as much as they blame the victors.

But if Israel panics, retreats from Gaza under a premature ceasefire with Hamas ascendant, and, as a victim, hunkers down under a rain of missiles, then the protests will only intensify and the world will shrug that Israel is suffering what it deserves. At least up to a point, opportunism, not morality, guides public opinion.

It is said that the 34-day Lebanon War of 2006 was a terrible defeat for Israel. Perhaps. But so far Hezbollah has not unleashed its huge arsenal of missiles, at a time when such coordination with Hamas might have kept all of Israel underground. Why?

For all its public boasting, Hezbollah quietly remembers the damage of 2006, the years of rebuilding, and the costs, both human and material, that it incurred by its so-called “victory” – and the subsequent lack of world sympathy for Hezbollah. The world cared little for postwar Hezbollah not because of its cause (which a sick global community often supported), but because of its image as a loser that foolishly squandered its capital for nothing. The same Germans who tuned Hitler out after Stalingrad had earlier egged him on after the fall of Paris. In an ill Europe of the 1940s, even the Holocaust did not lose Hitler public support; losing the war did.

In the supposedly lose/lose world of Middle Eastern warfare, Israel must ensure that Hamas nevertheless loses far more than Israel itself does, not because the world will publicly sympathize with the cause of the Jewish state, but because, for all its ideological chest-pounding, an amoral world still privately gravitates to the successful and distances itself from the failed. Only if Israel finishes its ongoing dismantling of Hamas will the current war end. In six months, long after MSNBC and CNN have gone on to their next psychodramatic stories, long after John Kerry has moved on to his next Nobel Prize quest, those in Gaza who now yell into cameras encouraging their leaders to kill the Jews will quietly agree not to try another such costly war with Israel – and that fact, and only that fact, will lead to a sort of peace, at least for a while.

– NRO contributor Victor Davis Hanson is a senior fellow at the Hoover Institution and the author, most recently, ofThe Savior Generals .