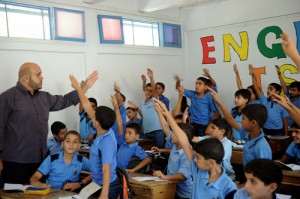 A video of summer camps run by UNRWA, the United Nations Relief and Works Agency for Palestine Refugees in the Near East, is making the rounds on pro-Israel social media networks again with footage that shows Palestinian children as young as 6 calling for “Jihad against the Jews.”

“The resistance in Gaza is not enough,” says one camper in UNRWA’s school in Balata. “We need to unite and fight together.”

The Lawfare Project, which promoted the video, that was produced by the Center for Near East Policy Research, headed by David Bedein, makes the claim that US and Europe-sponsored UNWRA is abusing children with brainwashing methods that include games aimed at teaching the values of war and the Arab “right of return” to Israeli cities. It portrays children writing names on kites of the Israeli cities that they will one day recapture as theirs.

Children are taught to chant mantras such as “Palestine is an Arab land from the river to the sea. We want Haifa, we want Natanya.” Camp counselors tell stories of how their grandparents lived in places like Jaffa and Jerusalem and the many cars, palaces, villas and ships they owned before the “wolf” came. “Isn’t it true that Jews are the wolf?” asks one counselor.

“I dream that I will return to Sheikh Munis [Tel Aviv],” says one child, roughly 10-years-old. “I hope Abu Mazen will achieve this goal and will not disappoint, he has built great hopes.”

Another adds, “The right of return is our holy right. If not me than my grandchildren [will return].”

The songs that are sung include inciteful lyrics which range from tamer verses like “I will not forget my promise to take back my land” and “collect stones, throw them at Israelis” to the more radical such as “we are the revolutionaries and we are filled with rage”, “when we die as martyrs we go to heaven” and “with God’s help we will wage war.”

Another child who appears to be about 7-years-old is asked who the Jews are. “They are a gang of infidels and Christians,” she says. “I will defeat them.”

An older teenager is filmed as saying, “Attacking stage by stage is not the answer. We need to attack all at once.” He continues by saying “There will never be peace between us and Israel.”

In one instance, an older child explains one of the differences between UNRWA schools and regular schools within the PA. “UNRWA schools teach us about the Naqba,” she says. “Government schools also but the course load is less than our schools. They teach us a lot about the right of return, how life was before 1948.”

The video explains how funding for UNRWA comes from 20 donor nations, with most of the money coming from the US, Canada, and Britain. UNRWA schools hold summer camps on their premises every year in Gaza, Jerusalem, Nablus and Jenin.