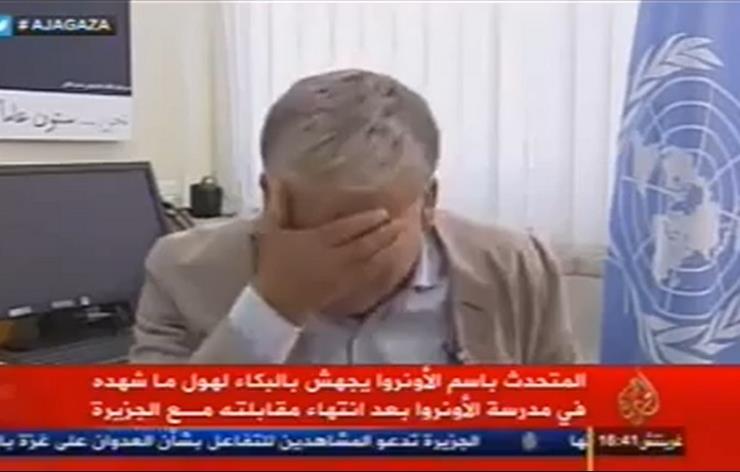 UNRWA, the UN Relief and Works Agency for Palestine Refugees in the Near East, has joined Hamas’s clamor for lifting Israel’s blockade on the Gaza Strip forthwith. This is the gist of what UNRWA’s Gaza spokesman Chris Gunness demands. No surprise here; UNRWA has never been impartial.

Its interest in self-preservation rules out fairness. Its existence hinges on keeping the flames of conflict burning.

That its facilities served as rocket arsenals is one aspect of a greater travesty. The rockets were apparently handed back to Hamas on at least three occasions and UNRWA appears complacent about the fact that its buildings were used to launch rockets at Israel and to fire on Israeli troops (thereby inevitably drawing counter-fire on supposed havens).

Many UNRWA personnel, moreover, are closely tied to Gaza’s powers that be and are not the do-gooders they purport to be. Twenty-five of the 27 members of the UNRWA executive in Gaza are Hamas activists. The agency’s schools are infamous for facilitating Hamas indoctrination.

Gunness’s demand is disingenuous for failing to mention cause and effect. It accuses Israel of “collective punishment of the 1.8 million Palestinians packed into Gaza.” To the uninitiated, it sounds as if this is a product of Israeli malevolence.

There is no mention of what caused Israel to impose a blockade, nor of what happened when no such blockade was in force. The fact that Israel allows food, medication, electricity and water into Gaza at the very time in which Gaza’s rulers fire rockets at Israeli communities is also missing from Gunness’s presentation of the situation.

UNRWA’s mandate is an aberration. The UN established a special agency in 1949 for those deemed to be Palestine refugees. Every other refugee in the world, regardless of objective hardship, is to be looked after by the Office of the UN High Commissioner for Refugees (UNHCR).

UNRWA works to prevent refugees’ offspring from losing their refugee status, thereby creating the greatest obstacle to the ostensibly desired peace. UNRWA fans the ambition to inundate Israel with millions of so-called refugees, while paying lip-service to a two-state solution.

This becomes evident when we consider the different definitions for “refugee” to which UNHCR and UNRWA subscribe. UNHCR’s refugee is one who “owing to a well-founded fear of being persecuted… is outside the country of his nationality.” By this definition, the refugee’s descendants are not refugees. Florida-born children of Cuban refugees are no longer considered homeless.

The only exceptions are the Palestinians. UNRWA classifies as refugees any Arabs, native or not, who sojourned “in Palestine between June 1946 and May 1948, and lost both their homes and means of livelihood as a result of the 1948 Arab-Israeli conflict.”

Not only could any itinerant foreign Arab laborer claim Palestinian refugee status, but UNRWA stipulates that the condition extends to “descendants of persons who became refugees in 1948.” One refugee parent suffices to inherit the distinction – even when the inheritor is not “outside the country of one’s nationality.”

Members of the US Senate this week demanded an independent investigation into UNRWA’s role during Operation Protective Edge. Accusing the agency of maintaining active ties with Hamas and of supporting its activities throughout the war, Senate Foreign Relations Committee members Mark Kirk (R-Illinois), Ben Cardin (D-Maryland) and Marco Rubio (R-Florida) wrote a letter to Secretary of State John Kerry accusing the UN agency of bias and characterizing its role in the conflict as “troubling.”

The senators noted that the US is the single largest donor to UNRWA, providing the agency with $294 million in 2013 and a total of $5b. since 1950.

With so many layers of hypocrisy cynically contributing to the perpetuation of misery instead of assisting the cause of peace and prosperity, perhaps it is time to regard UNRWA as a problem in and of itself. Unless UNRWA institutes radical changes, the region would be better off without it.