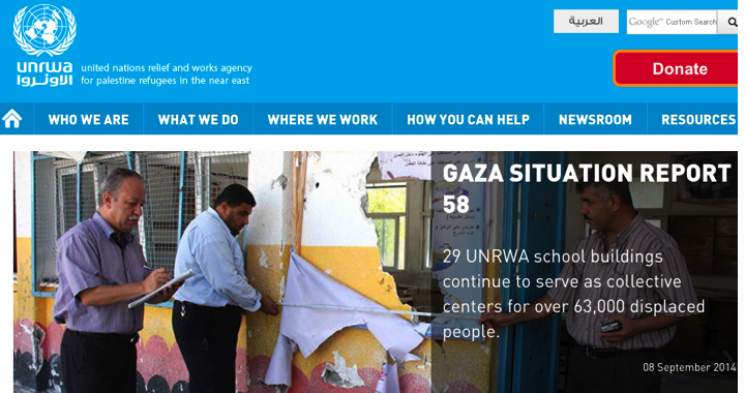 Outrage is still growing after a bipartisan coalition of U.S. lawmakers last month demanded an independent investigation of the United Nations Relief and Works Agency (UNRWA), a UN outfit, over its controversial activities in the latest conflict between Israel and Hamas, the officially designated terrorist group that rules Gaza. Some former officials and critics of the international organization are even calling on Congress to entirely defund some of its agencies and “human rights” outfits. Instead, the Obama administration has pledged even more U.S. taxpayer funding.

Especially troublesome for outraged members of Congress and other critics was the news that various UN facilities purporting to serve “Palestinian refugees” — schools and clinics, for example — were actually being used by Hamas to store and launch rockets at Israeli civilians. Making matters even worse: Once the missiles were discovered, the UN agency returned them to Hamas, claiming it was standard to hand over such materials to “local authorities” for alleged “disposal.”

Instead of properly dealing with such recurring problems at the agency, officials at the international outfit called for “war-crimes” prosecutions of Israelis at the UN’s self-styled “International Criminal Court.” Among other alleged crimes, UN “human rights” functionaries blasted Israel for shelling UN facilities — the same facilities used by Hamas to launch and hide rockets. A separate UN chastisement of Israel and the U.S. government was based on the fact that the anti-rocket Iron Dome system employed by Israel was not shared with Hamas.

However, despite escalating calls for action on the issue, it seems nothing has changed for the Obama administration. Not only will U.S. taxpayers continue to fund the widely criticized UN agency, the Obama administration recently pledged an additional $47 million to it. For critics, though, the UNRWA’s actions amid the latest conflict are beyond the pale and must be addressed by the U.S. government to avoid similar problems in the future.

“So outrageously have several U.N. institutions behaved, before and during the current Gaza crisis, that the United States can no longer ignore or excuse it,” noted former U.S. Ambassador to the UN John Bolton in a recent column. “Congress must act to defund U.N. bodies that perform unacceptably — thereby denying them the resources and the legitimacy of American support and putting other U.N. agencies on notice they could face a similar fate.”

Bolton, a neoconservative who served in the George W. Bush administration, singled out three UN agencies of particular concern. Chief among the global outfits in need of defunding, he said, is the dictator-packed UN “Human Rights Council” and its “High Commissioner for Human Rights.” Obama re-joined the widely ridiculed UN HRC despite broad opposition after the United States had previously withdrawn. The other offending agency U.S. lawmakers should address is the UNRWA, Bolton added.

“These failures are not simply one-time mistakes but reflect far-deeper, inherent flaws in the U.N. system,” he wrote. “Given Obama’s multi-lateralist sympathies, there is no chance he will do anything meaningful to rectify this conduct. Instead, Congress must investigate and then take the necessary steps to dissociate the United States from the United Nations’ unacceptable behavior regarding Gaza.”

Lawmakers on both sides of the aisle were outraged, too. In a letter to Secretary of State John Kerry last month, Sen. Ben Cardin (D-Md.), Sen. Mark Kirk (R-Ill.), and Sen. Marco Rubio (R-Fla.) expressed “profound concern” over the “troubling role” played by UNRWA in the latest conflict. Among other issues, the three senators highlighted “multiple instances of weapons found at UNRWA schools as well one-sided statements from UNRWA leadership that unjustly condemn Israel.”

The Obama administration needs to get to the bottom of it, they said. “We urge the State Department to launch an independent investigation into these incidents and to call on the United Nations leadership to hold UNRWA accountable, including by reprimanding or dismissing the UNRWA staff responsible as appropriate, as well as asking the U.N. to ensure that these incidents never take place again,” the lawmakers told Kerry.

The investigation should examine, among other issues, the fate of the Hamas rockets found in UN compounds, what measures the UN took to secure UNRWA property, and how the U.S. government plans to work with the global outfit to ensure that such incidents “are never repeated,” they said. “United States taxpayers deserve to know if UNRWA is fulfilling its mission or taking sides in this tragic conflict.”

Like the UN and most of its tentacles, the UNRWA receives more than one-fourth of its funding from American taxpayers — making the United States the single largest source of funds. Last year, Congress and the Obama administration sent almost $300 million to the outfit. In all, Washington, D.C., has funneled some $5 billion in U.S. taxpayer funds to the UN organization, which also had close links to the Palestine Liberation Organization, even while the Soviet-backed PLO terrorist organization was openly murdering women and children.

“I am demanding a credible and independent assessment of UNRWA’s actions during this crisis,” Senator Kirk said in a statement. “Given UNRWA’s ties to terrorism in the past, U.S. taxpayers deserve immediate answers and full transparency regarding their intentions and actions. The State Department must make clear to the U.N. that it needs to take all necessary steps to prevent Hamas from using taxpayer-funded property to launch terror attacks against our allies.”

In a separate statement, Democrat Senator Cardin slammed UN agencies and leaders for what he said was blurring the “clear distinction” between a nation-state defending itself and a terrorist group seeking to murder innocent civilians. “When an organization funded in part by the U.S. suggests that the two are morally equivalent, U.S. taxpayers take note,” he said. “Israel is undertaking extraordinary efforts to avoid civilian casualties while Hamas cynically uses other Palestinians as human shields and deliberately attempts to kill Israeli civilians. U.N. resources and personnel cannot be complicit in Hamas’ violent terrorist actions.”

Senator Rubio, meanwhile, widely viewed as a potential 2016 contender for the GOP presidential nomination, noted that American taxpayers — the leading source of funding for the UN — would not tolerate the use of UN facilities by terrorists. “We know Hamas has been using civilians as human shields and stores its weapons and fighters in civilian buildings, but for the U.N. to stand idly by while Hamas attacks Israel from its facilities is an outrage,” he said. “This is the latest example of why the U.S. needs to bring greater transparency and accountability to the U.N. by pursuing reform of its programs and institutions.”

The International Council of Jewish Women sent letters of support to all three senators, as well as a follow-up to Kerry demanding an investigation. “As taxpayers I think we have the right to question and find out,” said ICJW’s Judy Mintz. Other organizations have also joined the call.

The New American reached out to the State Department to find out whether Secretary Kerry had responded to the letter or acted on its demand for a proper investigation. A spokesperson did not respond to requests for comment before press time. However, in comments to the Jerusalem Post, a State Department spokesman claimed the UN was taking “proactive steps to address this problem” — in other words, it seems that no independent investigation has yet been launched.

“The international community cannot accept a situation where the United Nations — its facilities, staff and those it is protecting — are used as shields for militants and terrorist groups,” the spokesman, Edgar Vasquez, told the Israeli newspaper. “We remain in intensive consultations with UN leadership about the UN’s response.”

Of course, the latest controversy in Congress swirling around the UNRWA is hardly a new development. More than a decade ago, for instance, Democrat U.S. Rep. Tom Lantos, ranking member of the House Foreign Affairs Committee at the time, lambasted the agency in a letter to then-UN Secretary-General Kofi Annan. “UNRWA officials have not only failed to prevent their camps from becoming centers of terrorist activity, but have also failed to report these developments to you,” Lantos wrote.

More recently, other UN outfits have come under fire for, among other problems, supplying sensitive dual-use technology to the dictatorships ruling Iran and North Korea. In 2012, Hamas-affiliated candidates won 25 out of 27 seats on the UNRWA workers union board. All the while, the UN and its self-styled “human rights experts” continue lashing out at civilized nations, including the United States, for outlandish alleged “violations” — not enough taxes, not enough welfare, gun rights, and more.

While investigating the UN agencies involved could be a positive development, Americans should instead demand that the U.S. government withdraw from the global outfit altogether — and stop funneling taxpayer funds to it. There is already legislation in Congress, H.R. 75, to do precisely that. The GOP-controlled House could simply refuse to provide any funds for the UN or its agencies, too. However, unless and until enough voters lean on their elected representatives, the UN — widely ridiculed as an anti-American “dictators club” — will continue to run wild, with U.S. taxpayers funding it all.

Alex Newman, a foreign correspondent for The New American, is normally based in Europe. He can be reached at anewman@thenewamerican.com. Follow him on Twitter @ALEXNEWMAN_JOU.