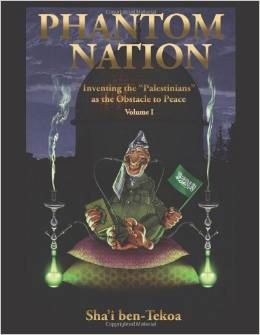 This three volume work, written by Middle East scholar Shai Ben Tekoa, provides a unique opportunity for anyone who wants to understand the inner workings of the current Middle East war

This book is easy to read and easy to comprehend.

Despite ongoing genocides around the world, Ben Tekoa notes that war in the Middle East surrounding Israel and surrounding nations seems to be the only conflict publicly discussed on a regular basis.

One often hears of a nation who stole the homeland of the Palestinian people.

The press in western countries, describes the Israeli people, army, and government as part of a relentlessly power-hungry nation.

However, upon looking to the history of the conflict in the Middle East in a logical way, one must wonder where the term “Palestinian” originated.

Sha’i ben-Tekoa, in Phantom Nation: Inventing the “Palestinians”, focuses his book on this concept.

To begin, the Arabic language does not have sounds or letters used to create a “p” sound, so Falestin is used as a replacement.

If Palestine was a historical name used to refer to the Arab nations, why would its creators craft a name that could be easily and correctly pronounced in their language?

Further regarding language, nations considered Palestine speak Arabic, which originated in the Arabic Peninsula not Jerusalem. There are no studies of the ancient language of Palestine because there was no common language.

While Palestinians proclaim they have a long history living as a nation in the area that is Israel, there is no lingual proof that such a nation existed.

If such a nation did exist, its origins are not in Israel.

Ben Tekoa points out that the history of the word “Palestinian people” is seeded in European Imperialism.

When Britain owned the land in the Middle East, it was decided a suitable name would be one given by Romans hundreds of years before: Palestine.

Article two of the PLO’s Palestinian Covenant of 1964 even states, “Palestine with its boundaries at the time of the Britain Mandate is a regional indivisible unit.”

Yet the boundaries were not created by those calling themselves Palestinians. The term was not used in the United Nations (UN) until the fall session of 1969 in the UN General Assembly Resolution 2535. The term didn’t make its diplomatic debut until a year later in Resolution 2628. Before this, Palestine was only used to describe the land to be given to the Jews, not to any Arab entity.

Most interesting, while talk of the creation of a Jewish state first began in the early 20th century, discussion in the media and among government officials differed from that of today.

In January 1919, Emir Faisal, acting on behalf of the Arab Kingdom, and Dr. Chaim Weizmann, acting on behalf of the Zionist Organization, met to agree upon land settlement in the Middle East. On 3 January, they signed the Weizmann-Faisal Agreement, stating there should be two territorial entities: The Arab State and Palestine. Arabs would own and live in Arab State while Jew were to be given Palestine. Once again, the phrase “Palestinian people” referring to Arab nations is not in this portion of history.

It is in contract, “Palestine” is specifically used in reference to a Jewish state.

Before the term “Palestinian people” was ever brought into existence, Arab nations had been violent toward Israel and Jews in general. There is no historical evidence to show a Palestinian nation ever existed at all, and there is no evidence it would have been present in the land owned by Israel. While supporters of Palestine tell the world that Palestinian history is simply not well known, these supporters do not and cannot give any substantial examples to back this theory.

Why, then, would Arab nations suddenly change their public motivation for such hatred?

They gain sympathy by creating a “phantom nation” that has endured nothing but hardships.

Adding to this problem, most people and most government officials in western countries do not pay enough attention to the underlying crisis to see the danger in such victimizing language, which aided in the birth of the phantom nation of Palestine, As if the basis for the war stems from the claim that it is the Jews who deny freedom to the Palestinians.

Before 1967, Ben Tekoa emphasizes that there was no reportage in the media of a Palestinian nation,

Before media coverage and mention of a “Palestinian nation” became a common discussion in Europe and North America, attacks against the United States were a consistent occurrence during the early 1980s. Government and military officials were kidnapped, tortured, and used as a bargaining tool by many Arabian countries such as Syria and Iran for several years. On 10 February, 1984, Frank Reiger was kidnapped by Arabs. Later in February the same year a CNN correspondent was kidnapped. Six days later, Jihad kidnapped CIA Station Chief Williams Buckley. Three Arabs opened fire with automatic weapons on the main street Jaffa in Jerusalem on April 2, 1984, and three days later two passerbies spotted two bombs and called the police. Violence from Arab nations during only a three month period exemplifies the situation Israel has been facing for years.

A few years later, In January of 1988, a riot ensued in and around Jerusalem’s Al-Aqsa Mosque. The Washington Post headlined the next day: “Israeli Police Storm Temple Mount: Witnesses Say Tear Gas inside Two Islamic Holy Places”. Any speeches and appearances of Jews that could be construed as offensive to Islam have inspired hatred and violence in the Muslim people. The sermon the day of the riot was focused on encouraging Muslims to “demonstrate” against Israel. The Israeli police did not simply choose a Mosque and decide to create a violent scene. The demonstrations did not include people shouting their opinions but rather people aiming to harm the Israel police. There was a several hour long period of Israeli police officers and mobs of Arab men chasing each other. People of both sides were harmed. Still though, news reporters wrote only of violence of Israeli police in a holy place of innocent people attending the Mosque for prayer.

With what Ben Tekoa describes as propaganda which appeared in text and images of the Washington Post , the myths of Palestinians as a victim nation spread throughout the Western nations, while support for Israel dwindled.

Israel was soon seen as a bully to the weak Palestinian people, even though this people did not exist before 1967 and was created by Arab nations who before then simply sought to take control over Israel.

A common error in those Western nations is the idea that the Arab countries would be willing to use a democratic form of government or even know how to successfully run one when they have not seen one in use. Corrupt dictatorships run the states in the Arab League, and they have no interest in peace.

Ben Tekoa’s thinking is that such Arab nations have succeeded in propagating the myth that they are simply looking to regain their land, Palestine, from the bully state of Israel.

Phantom Nation: Inventing the “Palestinians” represents a book that explains the process by which the hyped image of a struggling Palestinian nation was fostered.